Share All sharing options for: Vault, by David Rose 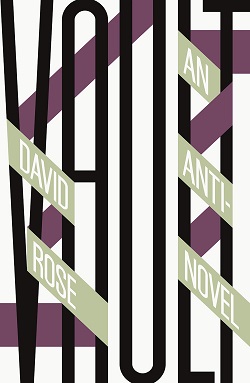 Title: Vault
Author: David Rose
Publisher: Salt Publishing
Year: 2011
Pages: 162
Order: Salt
What it is: A novel that questions novelists and the realities they build their fictions upon, asking whose life is it anyway?
Strengths: Rose manages to create a thriller that once it kicks into gear has you turning the pages while also serving up something that tackles serious questions
Weaknesses: It has hidden layers which will bring you back for a second reading

In 1939 three-year-old Susi Bechhöfer was sent to England on a kindertransport and placed with foster parents in Wales. This childless couple promptly erased from the girl all knowledge of her past and Susi Bechhöfer became Grace Mann. Twenty-seven years later, through marriage, she became Grace Stocken. In 1991 she featured in a BBC TV documentary, Whatever Happened to Susi? Five years later, having retaken her birth name, Bechhöfer published a memoir, Rosa's Child. Five years after that she again had her identity taken from her: WG Sebald's acclaimed novel Austerlitz borrowed from Whatever Happened to Susi? and from Rosa's Child. Susi Bechhöfer had now become Jacques Austerlitz. In a Sunday Times article Bechhöfer wrote: "I felt once more that my identity had been usurped."

I am a big fan of W.G. Sebald, and loved Austerlitz. I was thus intrigued by the later controversy surrounding it, which you will probably remember: the woman claiming that Sebald had stolen her life story, which she'd given in a documentary; Sebald's admission of that; his agreement to acknowledge it in later editions; his death before he could do so.

I was struck by her need for that acknowledgement. I began to wonder how I might feel confronted with a fictional version of my own life. Even more: to have my death stolen. That was really the starting point. So from that point of view, the bulk of the novel was, to me, filling. But it had to be interesting filling.

David Rose talking to Gavin James Bower in 2011 for a 3:AM Magazine interview

In 2004 Malcolm Gladwell published an article in the New Yorker about Dorothy Lewis, a psychiatrist he had profiled in 1997 for the same magazine. Elements of her life had been borrowed, without her permission, for a play by Bryony Lavery, Frozen, which had started life in 1998 in Birmingham Rep and played in the National's Cottesloe Theatre in 2002. But it was only when the play crossed the Atlantic that Lewis became aware of what Lavery had done, Frozen playing off and later on Broadway in the first half of 2004.

As well as borrowing from Lewis's life Lavery had lifted lines wholesale from Gladwell's 1997 New Yorker article. Gladwell's 2004 New Yorker article deals at length with the words borrowed by Lavery, focuses on the concept of plagiarism, but for Lewis it wasn't the words that mattered. As she explained to Gladwell, it wasn't even to do with Lavery borrowing from her professional career: "That would have been acceptable. But she did more than that. She took things about my own life, and that is the part that made me feel violated."

I've spent my life hiding my emotions - you have to, to survive - hidden even from myself. There are feelings we don't even understand ourselves. That's what we look to novelists for.

Okay, he's researched the cycling, the fictionalization I expect, reality is mostly humdrum, but emotion, motivation...

If you're going to tamper with a man's life, at least provide some insight. Not this absurd existential anti-hero.

Described as an anti-novel Vault tells two stories in one: it opens with a section from an unnamed novel, featuring a World War Two British army sniper called McKuen cycling across a lunar landscape. In later chapters we follow him for a time as the Allies advance on Germany, learning of some of his wartime experiences. Demobbed, we catch him back in Blighty, where he becomes restless. He returns to Europe, a bicycle-mounted knight-errant, an aid-worker bringing medicines. The injustices he witnesses turn him into a dark knight, bringing justice, from the barrel of a sniper's rifle. Word of his exploits spreads and, eventually, he is warned off by military intelligence. He returns home and is slowly sucked into Britain's domestic cycling scene. Then internationally, at the Peace Race. By now, though, McKuen has been sucked into another world, the world of Cold War espionage: on the Peace Race he passes and receives secret communications through carefully choreographed wheel changes. One thing leads to another and, back in England, McKuen ends up captured by a militant anti-nuclear group out to embarrass the British government.

Vault's other story is told to the reader by the man who becomes McKuen, an unsung hero whose life had been told in a radio documentary and was then misappropriated by a novelist for a Cold War thriller. His real name we never learn. Across chapters that alternate with the novel within the novel he seeks to set us straight on how close and how far apart reality and the literary depiction of his life are, caustically criticising the unnamed thriller writer and slowly telling his own story.

The two stories - the novel within the novel and the refutation of it - twine around one and other, a double helix, two stories with the same DNA, to create an anti-novel, a form that is both modern and ancient. The term dates to Sartre, the concept to Don Quixote and Tristram Shandy. Basically - very basically - an anti-novel is a novel that questions the authority of the author: if we lose faith in the novelist can we still retain faith in the novel?

Much of the time this is done playfully: Flann O'Brien's At Swim-Two-Birds and Alisdair Gray's Lanark feature characters interacting with their creators, the novelists. Approached more seriously, as in Italo Calvino's If On A Winter's Night, you get books within a book. Done well it's not just a literary take on cinema's attempts to break the fourth wall by having a character gurn at the audience through the camera: done well it facilitates the deeper exploration of complex ideas. It does exactly what novels are supposed to do.

In Vault Rose manages to be both playful and serious. By drawing us into his unnamed narrator's story we get to feel his anger and pain at the way his life has been misappropriated, more so than we can feel the anger and pain in newspaper or magazine articles about Susi Bechhöfer or Dorothy Lewis or others. You connect with characters in fiction in ways you rarely connect with real people in newspaper or magazine articles.

But Rose also has fun while being serious. When McKuen - in the novel within the novel - goes undercover in order to track down a militant anti-nuclear group out to embarrass the British government he assumes the identity of Mr Cain, in what looks like a nod to the Harry Palmer films and to the Len Deighton novels they were based on, versions of the same stories in which the hero only has a name when played by Michael Caine (Deighton had made him anonymous).

Rose - who normally writes short stories - also dares to be brief, keeping his story tight, not letting it expand all over the place with unnecessary colour and clutter. Although there is plenty of colour. There's a love story. And, of course, there's the cycling.

There were spectators knotted around either side of the summit, some with bikes. He scanned them, but had no idea of who to look for. But as he crested the col he could see the rock ahead to his right, half-hidden in the grass. He swerved across, hit the rock at an angle to topple him into the grass, skidded down the slope with the bike anchored to his feet.

Still winded, he reached and released the toe straps, disentangled the bike, got to his feet. The front wheel was nicely buckled.

He began to move it back and forth. One of the spectators with a bike pushed forward, pulling his own front wheel off, thrusting it forward.

McKuen took it, hoping this was the one, released his wheel from the fork drop-outs, slotted in the stranger's.

Is it about a bicycle? That surely is the question that has to be asked of all novels that find themselves at some point classed as cycling novels. Here's Rose: "I didn't see it as a cycling novel while writing it, just used what I knew from experience."

But while not being a cycling novel, Vault is still a novel fit for monomaniacal cycling fans, featuring as it does a cycling protagonist, depictions of the post-War British cycling scene, an imaginative take on the Peace Race, and stories about Coppi and Koblet. Of cycling itself, it probably has more than you will find in Uwe Johnson's The Third Book About Achim (which itself asks questions about the presentation of real lives on the page).

If you need it to be about a bike in order to read it, then let it be about a bike. But really it's about much more than that. And more than can be grasped in a single reading, with Rose adding hidden layers that will bring you back to it after you've finished. I finished it marvelling at the way Rose pulled everything together. But knowing I would be reading it again before I got all that Rose had done within its brief 162 pages.

Surrender to the weight of the bias in my pocket. My God. Is that what my life has been reduced to? Amateurish purple?

Look, I don't so much mind my life being borrowed. It's what novelists do. They have to make a living. I understand that. And besides, I can correct it, put the record straight.

What I do mind is my death being stolen. It hasn't happened yet! How else could I have given that bloody interview? Unsung Lives, Unsung Heroes, some stupid bloody series title. I couldn't bring myself to listen to the broadcast. Vanity and money, the oldest traps out.

In the cases of both WG Sebald and Bryony Lavery, once the initial furore died down, critics generally came down in favour of the writers, excused their borrowings, gently brushed aside the protestations of  Susi Bechhöfer and Dorothy Lewis about the manner in which their lives had been borrowed. As Malcolm Gladwell writes in his 2004 New Yorker article: "Isn't that the way creativity is supposed to work? Old words in the service of a new idea aren't the problem. What inhibits creativity is new words in the service of an old idea." Literature, it seems, can excuse most things.

But this is where Rose goes beyond his initial source in Vault: the unnamed narrator here has most trouble with his fictional death. And the way he deals with that offers a very different take on the damage done when lives are borrowed without permission. And that's why you should really read Vault for yourself.