The Art of the Jersey, by Andy Storey

Share All sharing options for: The Art of the Jersey, by Andy Storey 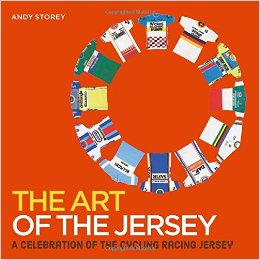 Title: The Art of the Jersey – A Celebration of the Cycling Racing Jersey
Author: Andy Storey
Publisher: Octopus Books
Year: 2016
Pages: 224
Order: Octopus Books
What it is: Photographs of cycling jerseys
Strengths: It's virtual gear fondling, and we all like a bit of gear fondling of a winter's weekend
Weaknesses: You really do need to get your geek on for this one

"And so art is everywhere, since artifice is at the very heart of reality. And so art is dead, not only because its critical transcendence is gone, but because reality itself, entirely impregnated by an aesthetic which is inseparable from its own structure, has been confused with its own image. Reality no longer has the time to take on the appearance of reality. It no longer even surpasses fiction: it captures every dream even before it takes on the appearance of a dream."
~ Jean Baudrillard, Simulations

There are some cycling books I review and I just know that I will be seeing them again in the not too distant future, in new boots and panties. Biographies, autobiographies, books about particular races or groups of races, techs mechs books, how to guides, why to guides, travelogues. The staples of any cycling book publisher, someone's got to have another take on the same topic, and that's fine.

There are, however, some books I never expect to see again. Such as Phil Carter and Jeff Connor's gorgeous little book about headbadges, A Cycling Lexicon. There's no way that's coming around again, it's way too niche for there to be more than one of, gotta be. But don't take my word on that. Here's how little I know about these things: I thought I'd never again be seeing Bill Humphreys and Jerry Dunn's The Jersey Project from 2012 – itself a translation and updating of Henk Theuns's 2010 Dutch book, Koerstrui – and yet not only do I have Andy Storey's clone – sorry, replica – of it sitting on the desk in front of me here, we also have Chris Sidwell's copycat take on the same topic to come next year.

Who knew there'd be money to be made putting the Wiggle jersey catalogue into hardback?

As a way of telling cycling's history, telling cycling's history through a selection of cycling jerseys can be cute, quirky and lots of fun. The Jersey Project had some stories about some of the jerseys and the men and women who had worn them but for the most part, like the headbadges book, left it up to the reader to read in their own stories about the people who had worn the jerseys. I'm not averse to doing a bit of work to get something out of a book and so I sat down with Storey's The Art of the Jersey and a big mug of coffee and prepared to tell myself some stories.

Let's start with the book's first jersey, a Bianchi. 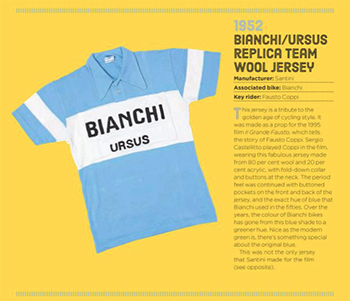 That one's perfect to begin with, great for easing yourself into the task, especially as this jersey dates to 1952, Fausto Coppi in his prime, I mean who doesn't know stories about him winning the Giro? Except, wait a minute, what's that? This is a Santini replica jersey? A film prop for some 1990s' straight-to-TV flick about Coppi? I've got to come up with a story about the actor playing Coppi, Sergio Castellitto?

Let's not. Let's skip a few pages on. There, that one, it's got long sleeves but it'll do anyway. 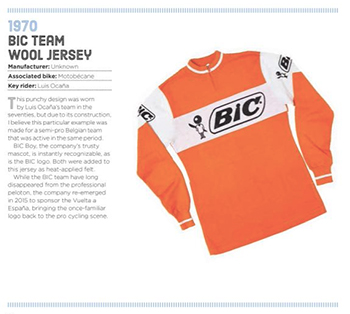 It's a Bic jersey, dated to 1970. That's Luis Ocaña. Except … it's another looky-likey jumper: "I believe this particular example was made for a semi-pro Belgian team that was active at the same time."

Okay, actually, you know what, let's bin this idea. If it goes on much longer I'm going to be asked to dream up stories about some middle-aged Fred wearing a replica jersey and sweating last night's curry out while crawling up Box Hill. And I am so not going to go there.

Where are we going to to then? Let's see where Storey takes us. Let's try this little beauty: 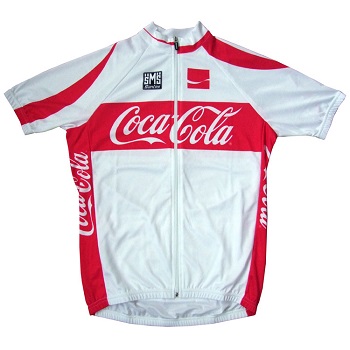 Here's what Storey has to say about it:

"When Santini released photographs of these jerseys leaving the factory bound for Japan, I decided I had to get hold of one. By contacting a friend who lives in Japan, I managed to purchase a jersey and matching shorts. With a crisp white background and the classic Coca-Cola red, this fantastic jersey looks suitably chic and stylish."

How about this baby? 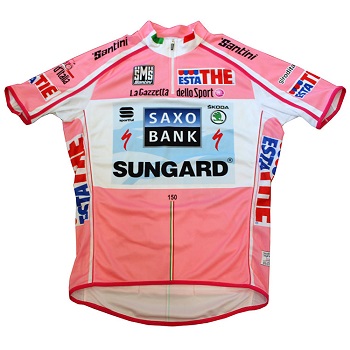 A 2011 Giro d'Italia maglia rosa. Not one of the ones Contador would have been contractually obliged to scrawl his name on with a Sharpie in between getting off the stage and heading over to the media. What's its story Storey? This is its story:

"Having two competing clothing brands on the sponsor panel (Santini who were the race sponsor and Sportful, who were the team sponsors) presented insurmountable problems with the complex contractual licensing agreements for replica sales, so this jersey was never available for retail sales. It was made only as a gift for team staff and sponsors."

Oh....kaaay...this is interesting, isn't it? A book like a book that's already existed and was itself an extended take on another book, only this book changes up the story by including replicas in its collection? You know what? This is probably the single most subversive and philosophically challenging book on the entire Café Bookshelf. It's got layers of simulation within simulation that would leave Baudrillard scratching his head. It makes the philosophical conundrum of the Sugababes – if I went to see the Sugababes in concert in 1998 when they were Siobhán Donaghy and Mutya Buena and Keisha Buchanan and if you went to see the Sugababes in concert in 2011 when they were Heidi Range and Amelle Berrabah and Jade Ewen have we both been to see the Sugbabes? – look easy. This is a book that makes Jorge Luis Borges's little story about Pierre Menard seem straightforward. And for that reason I salute Storey and what he has achieved with The Art of the Jersey.

I'd say chapeau only I'm scared that'd only give him the idea of coming back with a book of cycling caps. And I don't want that. It really is possible to get too much of a good thing.