Cycling - The Craze of the Hour

Share All sharing options for: Cycling - The Craze of the Hour 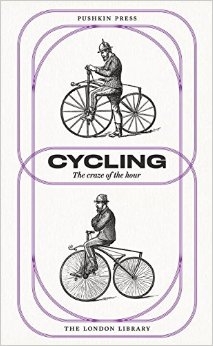 Title: Cycling - The Craze of the Hour
Authors: George Herschell, Jerome K Jerome, Barry Pain, Charles Spencer
Publisher: Pushkin Books
Year: 2016
Pages: 91
Order: Pushkin Press
What it is: A cycling curio, a collection of essays of Victorian vintage of what was then, as it is now, the craze of the hour
Strength: Though dated the articles chosen still feel oddly familiar even today
Weaknesses: It can seem to be as whimsical and ironic as those adult Ladybird books

"It seems unthinkable to us today the benefits of cycling could ever have been in doubt but as Schopenhauer said 'All truth passes through three stages. First, it is ridiculed. Second, it is violently opposed. Third, it is accepted as being self-evident.' Our book captures all three."
~ Dunia Garcia-Ontiveros, Head of Bibliographic Services, The London Library

Cycling - The Craze of the Hour may actually be all of those things. But it is also, as it is described, a fascinating and humorous insight into the cycling boom of the Victorian era. It is also a book not without relevance today, not just because cycling is once again the craze of hour. It serves as a gentle reminder to the reader that an awful lot of people spoke an awful lot of rubbish about cycling away back then, just as they do today. As a demonstration, let's look at Barry Pain's amusing short story, 'His Last Pupil', published in 1905 in Humours of Cycling (alongside contributions from HG Wells ('A Perfect Gentleman on Wheels') and Jerome K Jerome, who we'll come to in a moment).

"Wherever I went I was met by bicyclists who longed to make others bicycle. It was not for health, nor for fashion, nor for exercise that I finally took to the machine; it was simply from the pressure of public opinion."

Forced to take to the saddle by peer pressure, Pain's narrator calls upon the services of a cycling instructor, Barkinstone. You can, if you want, think here of of Mark Twain's 1884 tiresome account of his efforts to learn to ride, Taming the Bicycle (which even he thought wasn't worth publishing but which forever crops up in quote and literary cycling listicles), or any of the many other 'humorous' accounts of attempts to master the old high wheelers. But while Pain's story is firmly of this genre it is actually about learning to ride a more modern machine, the ordinary, basically today's bike only heavier and without so many gizmos that can go break or wrong. Rather than learning how to mount and dismount a Penny Farthing, Pain's narrator is looking more for the type of service one might get from any of the bazillion bike-fit experts selling their snake-oil to those today who succumb to peer pressure.

"With an introduction from my athletic friend I sought out Barkinstone in the Enderdown Road. He was a tall, thin man, with a loose lip and inquiring eye. He heard what I wanted and then looked up entries in a notebook. 'I'm full up for a fortnight,' he said. 'You can take the course then if you like. I shall require the five pounds in advance and a written promise to keep my system of tuition secret. That is my usual custom.' I gave him the money and the promise and said good morning.

"'Wait a minute, sir,' said Barkinstone. 'I must have a machine exactly right ready for you to learn on. Step this way.' He took me into another room, weighed me carefully, measured me frequently and accurately and told me exactly what clothes I was to get. He had a model suit there and explained it to me. He had a tame tailor, who was entrusted with the making of these suits. He would not risk his secret by allowing you to employ your own tailor.

"At the end of a fortnight I returned to him.

"I paid altogether (exclusive of moderate charge for the clothes) eight pound three shillings to Barkinstone, six pound for tuition, one guinea for choosing a machine for me and two guineas for procuring, altering and fitting a special saddle. In four days I could ride straight up a stiff hill without bending my back and with my hands off. I could take my machine to pieces and put it together again. On the fifth day I rode forty miles without feeling particularly exhausted. Now, I am by no means an athlete, and I am particularly slow at learning anything. In short, Barkinstone was expensive, but he was also the most amazingly clever and thorough instructor that the world has yet produced."

The punchline, when it comes, about half way through this twelve-page story, will make you wonder about today's bike-fitters.

Pain's is one of two short stories in this brief quartet, the other coming from the pen of Jerome K Jerome, who is famous for the famously funny Three Men in a Boat (imagine Tim Moore going on a boating holiday with Ned Boulting and Chris Boardman, and Boardman's dog) and the far-from-famously-funny Three Men on a Bummel (imagine Felix Lowe, Robert Dineen and Andrew P Sykes on a cycling holiday in Germany). His short story here, Women and Wheels, is definitely from his bummelling period (it was published five years after his cycling novel) and seems to me to be a terribly, terribly dated tale about New Women, told by men.

"The New Woman is difficult to fathom. You have to be prepared for everything. I could understand her running away from a loving husband after a few months of wedded bliss, but why to Battersea Park! It seemed an inadequate place as a refuge for a disappointed woman."

Charles Spencer's The Modern Bicycle fills up most of this brief collection and was meant to be a how-to guide for Victorian cyclists. Oddly, even today it is full of fun and useful advice, such as how to dismount by throwing your legs over the handlebars (all the cool kids do it that way), how to do trackstands ("sooner or later, you achieve a correct equilibrium, when you may take out your pocket-book and read or even write letters, &c., without difficulty"), how to ride without using the hands ("Fancy riding of this kind must only be attempted on good surfaces. Description will not assist you much here.") or even how to ride while stretched out straight, feet forward, head back. And you think Peter Sagan has got skillz? The boy's an amateur compared to Charles Spencer and his chums.

An interesting comment comes when Spencer turns to training, and particularly nutrition:

"The severity of the rules of professional training has been much relaxed of late years, and many things, such as vegetables, stimulants in great moderation, &c, are now allowed, which before were rigidly excluded."

Stimulants covers a wide range of modern sins, from alcohol and coffee through to strychnine and cocaine. Who knows what Spencer meant it to mean. But in an example of a daily diet he suggests "a glass or two of claret or sherry and water" at supper time (nine in the evening) and "a tumbler of grog (gin, whisky, or brandy, without sugar)" as a nightcap and, at breakfast the next morning "a table-spoonful of spirit" to soften "dry toast or rusk" as part of the morning repast. That's the sort of stimulation which today we might tut-tut about but can still be secretly proud of.

George Herschell, on the other hand, writing about cycling and heart disease two decades later, takes a much dimmer view of the sport and was a total fun sucker. Back then, cycling had many cheerleaders, members of the medical profession who were if not paid then certainly encouraged with benefits to say positive things about cycling. Professional boosters, same as we have today, throughout cycling. And so medical magazines and newspapers were filled with the chunderings of this claque. Every action requiring and opposite and equal reaction, naturally there was a counter claque, telling just how dangerous cycling was. Here's Herschell:

"For whilst the novice, by sheer carelessness may strain his heart - but if under middle age can escape if he will only take the most ordinary precautions - the skilled and trained professional cyclist, on the contrary, who can travel for hours without turning a hair, is almost certain to produce degenerative changes in his heart and arteries."

Herschell goes on to use math to prove that the craze of the hour is a crazed mass murderer:

"Of a thousand people over middle age, we may expect to find a hundred whose circulatory apparatus is beginning to show signs of wear. If only fifty out of this thousand take up cycling - and as things go I am sure this is below the average - out of this fifty, five will certainly have affected hearts. And there is no getting away from this fact. It therefore follows that at least five out of every fifty persons over middle age who take up cycling will be almost certain to do themselves grave injury unless they exercise the greatest prudence."

Across a century and more so much about cycling has changed. And yet so much has stayed just the same. And that is why Cycling - The Craze of the Hour really is such fun. Dated it may at first seem. But once you start reading it's hard not to see how much of what it says is still being said today.