Shut Up Legs!, by Jens Voigt

Share All sharing options for: Shut Up Legs!, by Jens Voigt 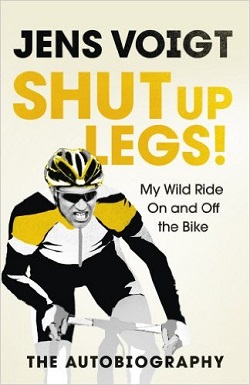 Title: Shut Up Legs! - My Wild Ride On And Off The Bike
Author: Jens Voigt (with James Startt)
Publisher: Ebury (UK) | Rodale (US)
Year: 2016
Pages: 244
Order: Penguin (UK) | Rodale (US)
What it is: The second stab at autobiography by the Jensie
Strengths: It's the Jensie
Weaknesses: It's all about selling the Jensie and his Shut Up, Legs! brand

"The next year [after Operación Puerto, 2007] I got involved with the CPA, the Professional Cyclists Association, because I thought maybe I could help the sport. We worked on a lot of things, such as encouraging teams to have insurance for riders, and we lobbied for a minimum salary for neoprofessionals. But one of the biggest things we did was to put in place the biological passport that we use today to monitor a rider's biological levels over the years in order to determine if, perhaps, a rider has had an artificial boost. The biological passport allowed us to have indirect detection of doping in addition to the direct detection through drug controls. By monitoring each rider's values over the years, we could see more clearly if a rider was gaining an advantage from external means. We spent a lot of time establishing the list of which substances should be legal, which should not be permitted, and what levels of certain substances - say, for instance, caffeine - would be acceptable."
~ Jens Voigt, Shut Up Legs!

If cyclists were superheroes, David Millar would be a cross between the Saint1 and Preacher. George Hincapie, for years some tried to portray him as Captain America2 but in his autobiography he presented himself as more like the Dark Knight, secretly cleaning up cycling's mean streets. Dave Zabriskie, he tried valiantly and failingly to portray himself as Captain America3 while his former boss, Jonathan Vaughters, would - obviously4 - be the Riddler5. Another ex-member of that squad, Thor Hushovd, well of course, he was Thor.

Realising now that, secretly, behind the scenes, in the shadows, unbeknownst to anyone, quietly, never seeking credit, never seeking applause, a true unsung hero lurked, realising now that all this time Jens Voigt was working to clean up cycling by inventing the bio passport and drafting the banned list, well it's hard not to think of him as another member of cycling's cross between the Justice League and the Avengers. The Jensie.

It began in an interview on Danish TV. When, don't know, sometime in the mid noughties seems likely. Where, during the Tour. He'd been in break after break after break and the interviewer wanted to know how he did it, what did he do if his body was tired. And Voigt - the Jensie to his adoring fans, but let's call him by his name here - responded that he just told his body "shut up legs, do what I tell you." Thus a legend was born. A Fast Show catchphrase, clad in Lycra. Brilliant.

Some people, they listen to their body. The anti-SRM brigade, today's New Puritans of the peloton seeking to unshackle us from our transhuman future, seeking to stop us from becoming man-machines, they listen intently to the tedious monologues their bodies spout. Voigt, he does dialogue. Not just ordering his legs about with his trademarked (literally) 'Shut up, legs!'. An example - here he is on how he kept going for one more season, into 2014, despite paying a higher and higher price for his efforts:

"I also had a conference call with my mind, my body, my legs, and myself. And, basically, we came to an agreement. My body promised me that it could keep it together for one more year as long as I promised to release it from all the stress, suffering, and responsibility at the end of the year, because it was just going to fall apart after that. And I had to respect my body because, well, I surely didn't want it to fall apart in some big and beautiful bike race the following year with a million TV viewers around the world watching and realising that I had raced one season too many."

Jens Voigt. He's a cross between The Numbskulls and Inside Out. Or just crazy. Leastways that's what the doctor said when my aunt in Cork started talking to herself.

Whichever it is here, the fans love it. Lap it up. And they'll lap up Shut Up Legs! It's a book for lapping up. Goes down easy. It's got everything fans will want, all their favourite tracks. Like a greatest hits album.

In many ways it's not unlike Voigt's earlier autobiography, Man muss kämpfen!: Nicht aufgeben - Siegen lernen (You have to fight!: Don't give up - learn to win), which was described by Susan Westermeyer for Cycling News as being "a rather superficial look at the subject, a series of short chapters, more or less chronological. He presents no new information, no strong convictions, no insights, and very few criticisms."

That lack of criticism, Westermeyer used as an example then the fact that Voigt's German autobiography made little or no comment on his CSC team-mate Ivan Basso's involvement with Eufemiano Fuentes. She quoted Voigt's main comment:

"Our whole plan, our idea for the season, for the race, for the overall win in the Tour de France - from one moment to the next it was all for nothing! My great goal, which had run through my head like a film, was suddenly gone."

But if Voigt back then had little to say about Operación Puerto here it gets a whole chapter to itself. But one in which Voigt still finds little to say about his erstwhile team-mate. Here he is this time on the man who thought about doping and even went so far as to let the Spanish gynaecologist have a bag of his blood in case he ever felt like making thought become deed:

"Just before the 2006 Tour de France, our team leader, Ivan Basso, was expelled from the race for his involvement with Dr Eufemiano Fuentes and the whole Operation Puerto investigation in Spain (although he was never prosecuted for doping)."

"There were times where I'd be out training by myself and thinking, 'What could I do to get better?' But for me, I felt like I had a choice. Perhaps I could have become a big superstar by signing with certain teams and winning bigger races. But at the same time, I would have risked having everything blow up in my face. You know, after the Festina affair in 1998, it was still possible to ride clean and have a good career. The French teams were the first to take a strong position against doping, but other teams soon followed. And a lot of riders like me won smaller races or stages in the Tour without doping."

For all of the doping talk within the pages of Shut Up Legs! - and it's important here that you realise that there is much, much more talk of doping here than you will find even in books like Shadows On The Road or The Loyal Lieutenant - there is something weird going on: I actually came away from the book feeling like I knew even less about doping than when I started reading.

Go back to that quote I opened with. For most of the past decade I have believed that the biological passport came about because the UCI and the teams finally found common ground after Operación Puerto and the Telekom confessions, finally realised that doping was hurting the sport, that the loss of Spanish sponsors and the loss of German sponsors finally made them realise that something had to be done and that they were going to have to pay to have it done. I did not realise that this story was a total fabrication, something to buff up the image of the UCI and to buff up the image of the teams.

Who knew that the biological passport was the initiative of the CPA, the riders' union - heretofore seen as being about as useless as a eunuch in a brothel, good for nothing except sitting on the sidelines and watching what was happening - that the biological passport was Jens Voigt's great response to team-mate Ivan Basso's thought-crime, atonement for the time his former friend was consigned to the naughty step for sinful thoughts?

Shut Up Legs! mostly sees Jens Voigt dispensing homespun philosophy à la Forest Gump or Chance, the gardener. Or even - whisper it quietly - Johan Bruyneel, his former directeur sportif, whose career on the motivational speaking circuit was somewhat curtailed by the USADA report. You can just about see Voigt spinning 'Shut up, legs!' into motivational speaking. You can just about imagine him being played by Patrick Swayze in the film of the book.

A typical life lesson comes early in the book, when Voigt is talking about his parents and growing up in East German:

"Although they never tried to flee East Germany, they didn't embrace the Communist system, either, and refused to become members of the party. There were consequences for such decisions! It definitely cost my father certain jobs, and I can tell you that it didn't look good on my application to sports school later on, either. But Egon always said, 'Jens, shortcuts in life just give you short term advantages. Be true to who you are.'"

Having grown out of some Bicycling diaries it still has that diary feel to it, slightly episodic, somewhat disjointed. It's also got guest appearances interrupting the narrative à la George Hincapie's chamoir in order to tell us how AMAZING! Jens Voigt really is. Jan Schaffrath, Sam Abt, Roger Legeay, Chris Boardman, Thor Hushovd, Francis Bur, Stuart O'Grady, Chris Anker Sørensen, Bobby Julich, Lars Michaelsen, Stéphane Gicquel. Cyclists as luvvies, gushing politely over one and other. Combined, they give the whole thing the feel of an episode of This Is You Life.

Shut Up Legs!, by Jens Voigt
UK and US covers