Life of Mamils, by Martin Gatenby

The true story of a middle aged man who takes up cycling and rides the Étape du Tour and Paris-Roubaix's sportif.

Share All sharing options for: Life of Mamils, by Martin Gatenby 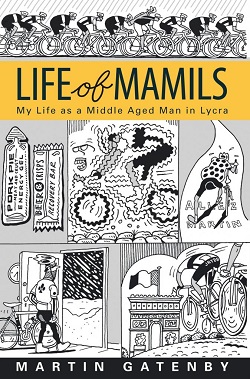 Title: Life of Mamils - My Life As A Middle Aged Man In Lycra
Author: Martin Gatenby
Publisher: Fisher King Publishing
Year: 2016
Pages: 204
Order: Fisher King
What it is: A Fred's life
Strengths: If you're about to take up cycling again after a long lay off maybe you want to know what other people like you have gone through
Weaknesses: You should never judge a book by its cover

It began with the Tour de France. 1974. A Saturday afternoon round-up on ITV's World of Sport:

"I saw men struggling to ride skinny racing bikes up mountains, rocking from side to side, with agony on their faces and pain in their eyes. I saw people running alongside them and screaming encouragement into their ears, while the commentator's voice crackled over what sounded like a telephone line as he became more and more excited about what he was seeing."

A love supreme was born.

For the next few years Martin Gatenby dreamed the dream and tried to live the life.

Then it all became a love outgrown:

"My pal Paul Bennett got an electric guitar and rock and roll started to look like more fun than cycling, so I had a typical teenage change of direction, and didn't ride a bike for over twenty years."

It was when Gatenby was thirty-something that he had his mid-life crisis.

Some men when they get into their thirties and have a mid-life crisis they start wearing loud shirts, they go out and buy some funny coloured fast car and they go on Facebook in an effort to try to reunite with someone they snogged when they were seventeen. Gatenby's mid-life crisis was only a little bit different - he went into Halfords, bought a yellow bike and tried to reconnect with his inner child:

"I can't pretend this was a glorious beginning. Five point eight miles is barely any distance at all, but the old mindset soon came back - an imaginary commentary running through my head telling me that I was on the verge of yet another glorious mountain top victory somewhere in the Alps. In reality it was five, nearly six, almost entirely flat miles and I was suffering more than I can ever remember. I was quickly into my lowest gear and out of breath. There were one or two tiny undulations on the route and every one of them felt like a mountain. I just couldn't believe that twenty years of sloth had put me back so far. I couldn't believe that I was actually unfit. It was hard to imagine that those golden summers spent effortlessly pedalling for miles through the countryside were a reality and not just some kid of rose tinted memory."

Picking up his own Sancho Panza somewhere along the way Gatenby signed up for the Étape du Tour, Maurenx to Pau. That must make it 2005 at this stage in the story. Which shifts to France:

"It's hard to describe how I felt. Ever since I was a boy I had dreamed of cycling in France, on the same roads as I had read about week after week in the cycling magazines that consumed most of my pocket money. Finally, here I was, clipping into my pedals to set off doing just that."

That was only a warm up ride ahead of the Étape. The real thing was like this:

"Finally, we passed under a gantry, there was a 'bleep' as we rode over the electronic timing mat, there was a sudden increase in speed and I was at last fulfilling my biggest boyhood dream. I was riding the Tour de France! Me! Riding the Tour!"

This being less than halfway through Life of Mamils and the biggest boyhood dream already fulfilled, what can possibly sustain this story for another hundred pages?

"I'd only ever intended to do the Etape once as a way of fulfilling a dream. Somehow though, it still felt like something was unfinished, as I'd only partially done what I had set out to do. I tried to rationalise these feelings in my mind, and to convince myself there was no need to come back, no need to prove anything any longer."

Obviously, there was still much to prove. What, I'm not sure, the rationalising all stayed in Gatenby's mind, never made it as far as the page. But the next year the Étape was taking place in cycling's biggest stadium: l'Alpe d'Huez. So Gatenby bought his tickets for the stadium tour and set about preparing himself for a new adventure.

It's at this stage that Life of Mamils enters that part of the hero's journey set aside for conflict and crisis. Gatenby falls prey to a lurgi which takes a chapter to describe but apparently leaves no long lasting effect. His wife leaves him which takes barely a sentence to describe and is likewise never mentioned again. He joins a cycling club and realises what part of the dream it was that was still unfinished business:

"Having fulfilled one part of my dreams when I had ridden a stage of the Tour de France by completing the Etape, I had a vague feeling that I wanted to experience one of the classics as well, to make me feel like 'a complete rider', just like the greats of old, at least in my own mind."

So he rides the Paris-Roubaix sportif:

"I must admit I was pretty overwhelmed thinking of some of the other riders whose wheel tracks I was now following. Not just the modern generations of greats like Tom Boonen and Fabian Cancellara but so many other names ran though my mind - Johan Museuw [sic], Sean Kelly, Bernard Hinault, Roger de Vlaemick [sic], Eddy Merckx, Fausto Coppi, and now, just for one fleeting moment in the mind of a forty something man another name could be added to that list... mine."

Eight years later - yes, I know, the second bite at the Étape, the adventure on the Alpe, should be happening here but first we have a chronic chronoclasm to get over - the Tour de France went to the UK, passing near Gatenby's home in Yorkshire. Someone in his cycling club came up with a way of marking the occasion: they'd bugger off out of Yorkshire. On a cycling holiday. Leeds (where the Tour started) to Hull, transfer by sea to Zeebrugge, and then down to Paris: Harwood House to the Champs-Élysées. Here's Gatenby just ahead of this little adventure:

"In a couple of days' time I would be crossing the start line of the Tour de France and setting off toward Paris, where I would ride around the Arc de Triomphe, along the Champs Elysees and live a dream I had carried for as long as I remember."

After a lot of Bells & Bikes-ish gushing over the Tour in Yorkshire only then do we loop back in time to l'Alpe d'Huez and that second Étape and the childhood dream's big finish:

"Then the road dropped a little and I could hear the public address system at the finish. I rounded the last corner and sprinted as hard as I could for the line. I faded badly with almost a hundred metres still to go, and just managed to raise one arm as I finally crossed the finish line."

Finally crossed the finish line, too exhausted even to realise the childhood dream had been realised.

But there's more. What goes up has to come down:

"I set off to find my way to the cable car that was supposed to have been organised for our trip down the mountain to our hotel. As I scrambled up the steps to the cable car, a man told me it was closed. I could see that were still gondolas moving so the machinery was obviously still operating and I was desperate to get back down the mountain. By this time there were a few of us, so by sheer weight of numbers and by some fairly aggressive waving of bikes, we pushed past him and got into the next gondola before he could stop us."

Could anything possibly be more British than such an act of utter contempt for the petty bureaucrats ruling Europe? Actually, something could, something no British adventure in Europe is complete without:

"I had a shower then went to find the others in a bar down the road. I ordered a couple of beers, then decided I should order four because I realised they were tiny, and they took so long to come. I drank them, and sat down to eat. I was ready for the sort of well deserved meal that you only really appreciate at the end of a hard day. Then the restaurant ran out of chips and I had to have salad instead. I can't remember being so disappointed with a meal."

It was only when Gatenby got home that the thing about the Alpe being part of the boyhood dream came back to him:

"I went to a little cafe one afternoon and noticed that there was coverage of the Tour on a big television hanging from the wall. As I watched the bunch get to the top of the Col d'Izoard I could plainly see, on the road beneath their wheels, my own entry into the history of the tour, my own moment amongst the greats.

"It said 'Allez Martin' across the road. My Mum and Dad had taken a tin of emulsion paint up a mountain and painted my name in huge letters and sitting there in a café in Harrogate, I could see their handiwork on television. I wanted to tell the man behind the counter but was too emotional to speak. I hadn't even seen it as I rode over it but now I knew that for this year at least, my parents had made sure that I'd left my mark on the Tour de France. When I saw it I felt like another tiny bit of one of my wildest boyhood fantasies had come true."

Think of it as being a little bit like that Bill Hicks routine about how a generation of kids who saw JFK's assassination on live TV went on to become couch potatoes, waiting for lightning to strike twice and something equally mind blowing to happen. What did they get? They got OJ Simpson and the most farcical car chase in the whole history of car chases. And lots of episodes of Let's Make A Deal.

Me, I read Tim Hilton's One More Kilometre and We're in the Showers and I want to believe that, one day, an 'ordinary' cycling fan - a Fred like you and me - will write a book to equal it, write the story of their world of cycling and capture something really special. That belief - that dream, if you will - keeps me going through books like Life of Mamils.

The most obvious thing that's wrong with Life of Mamils is that childhood dream we keep coming back to time and again. While Gatenby keeps referencing his childhood as a cyclist, telling us it existed, he never bothers to show it to us, not in any real sense. The dream of youth is the cornerstone of the story, it's why he rides the Tour's Étape and why he rides Paris-Roubaix's sportif, but we never get to see it, never get to experience it. We never get a chance to believe it.