Share All sharing options for: Ventoux, by Bert Wagendorp 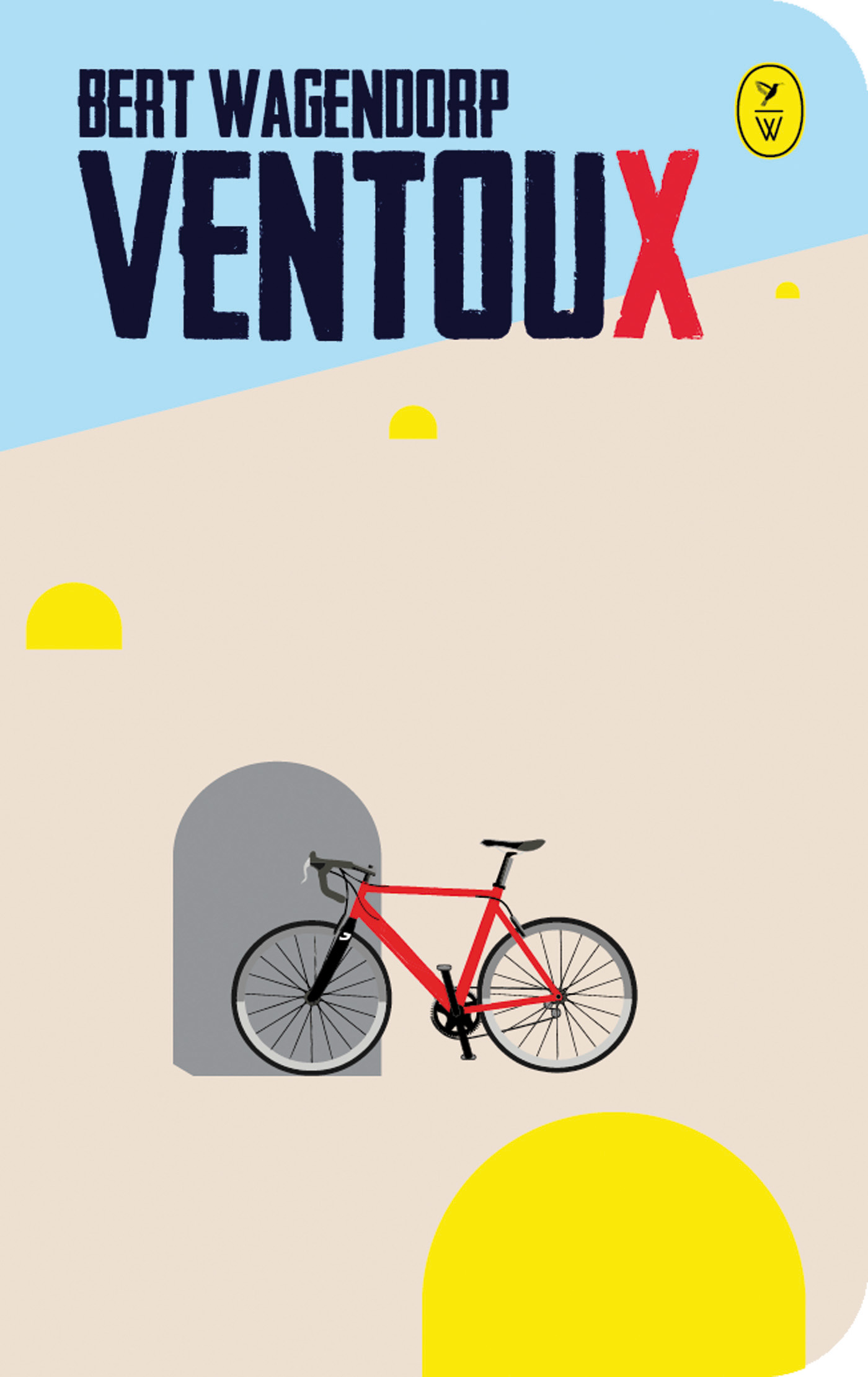 Title: Ventoux
Author: Bert Wagendorp (translated by Paul Vincent)
Publisher: World Editions
Year: 2013 (translated 2015)
Pages: 288
Order: World Editions
What it is: A BFFs reunited road trip cycling novel in which a group of childhood friends climb Mont Ventoux by bike 30 years after another visit to the Beast of Provence ended in disaster
Strengths: If you like banter, it's bristling with it
Weaknesses: If you've got a dairy allergy proceed with caution, this is as cheesy as they come

L'Alpe d'Huez is the Shawshank Redemption of the Tour de France's mountains: everyone's heard of it and it's not very challenging. Mont Ventoux is their Citizen Kane: you approach it - if you dare to approach it at all - with a mix of fear and reverence but afterwards find yourself incapable of warming to it to quite the degree its fans say you should. It's perfectly fitting then that Bert Wagendorp's 2013 Dutch cycling novel Ventoux - now translated into English by Paul Vincent - should also fail to live up to the expectations its boosters have heaped under it ('Hilarious', NRC Handelsblad; 'scenes of hilarity and raw conflict', De Morgen; 'a Tour de force', the Guardian). Less the Citizen Kane of cycling novels Wagendorp's Ventoux is of a kind with Jeffrey Archer's Kane and Abel: trite and best soon long since forgotten.

Featuring a group of Generation Peter Pan men - forty-something, staring down the barrel of fifty, incapable of leaving their childhood behind them - Ventoux is set in 2012 with flashbacks to the original coming together of the friends in the 1970s and a holiday to Mont Ventoux in 1982 that signalled the end of their youth and the beginning of the sundering of their friendship. Here's Bart, the narrator, describing himself and the other members of his gang:

"Close friendship is a rainbow. The rational spirit of Joost, the emotional one of André, the romantic one of Peter, and the stoical one of David fitted together well. It is always difficult to analyse oneself but I think I had something of everyone in me. You may find that a lack of personality on my part, but also the binding force of the modest ego. If they formed the different colours, I was the reverse prism that merged the beams of light."

Eleven months before the events on the Ventoux that are central to Wagendorp's plot, this quintet of friends becomes a sextet with the introduction into it of Laura (Dominique Sanda in a red bikini - "The dreamy eyes with the large irises, the nose, and the sharply drawn mouth, the dark-blonde hair: Laura."). Here's Bart again:

"I didn't know exactly what it was about us that attracted her. Perhaps it was our closeness that gave her a safe feeling; perhaps together we formed a protective wall against everything she had grown up with. Together we were sensitive, well read, intelligent, funny and sporty. Peter quoted from world literature, André was the star player on his local football team, Joost could explain relativity theory or point out constellations in the sky. You played him ten seconds of a saxophone solo and he knew who it was. David was the understanding listener who never interrupted you or brought up his worries. But with every day that she was with us, and every touch, it became clear that this ménage à six could not last forever."

Four months after her arrival, Peter - whose parents run a floating brothel - has completed and published his first volume of poetry, inspired by and dedicated to Laura. He's also become obsessed with the films of Liliana Cavani, in particular The Night Porter and Beyond Good and Evil. All while dealing with his mother losing her sight through a hereditary condition.

A couple of months on, Joost - who as an adult becomes "a brilliant physicist" whose contributions to string theory turn out to be not all his own work, leading the media to dub him the Lance Armstrong of physics (even before the media have been given carte blanche to use Armstrong's name as a watchword for the worst kind of cheating) - proposes to Bart that they cycle up Mont Ventoux that Summer in order to prove a scientific theory:

Peter - the budding poet and lover of Laura - invites himself along:

"Whenever I give a reading, people bring up Petrarch and his Laura, and of course that's not all that strange, since it's quite obvious, given the stupid coincidence of our names. And then of course they talk about Mont Ventoux."

And so in the Summer of 1982 Bart, Joost and Peter cycle up Mont Ventoux while André, David and Laura serve as their back-up crew.

At which point Peter ends up dead.

Thirty years later, in early 2012, chance, happenstance and Facebook serve to reunite the by now estranged friends. Chance sees Bart - now a crime correspondent with a national newspaper - stumble across André as the latter successfully fights charges of being a cocaine dealer (he prefers to be called a cocaine trader, trading as he did with the more rarefied strata of society than your common or garden dealer). Happenstance sees Joost's name appear in the paper when he is nominated for the prestigious Spinoza Prize. And Facebook is how Laura - who disappeared after Peter's death and has neither been seen nor heard of in the three decades since - reaches out to Bart, André and David in March (Joost gets a text message, he not being on Facebook) suggesting that they reunite in July, in Provence, a month after the thirtieth anniversary of Peter's death. At which point they will finally find out why Laura disappeared from their lives for so long.

The secret of Laura's disappearance is the key plot point in Ventoux, Wagendorp holding off and off and off the big reveal until the novel's closing pages. For some reason, not one of the four surviving male friends - at least three of whom swapped bodily fluids with her during the brief time they knew her, as did the other one, the dead one - has the wit to flick through Laura's Facebook pages, or even to Google her, and find the answer to the question that appears to have troubled each of them for three decades. Having waited thirty years they're each only too willing to wait another four months to have their questions answered (forcing the reader to endure from page 74 until page 273 to be told something they'll have guessed by page 145). Nor has even one of them guessed what even the half alert reader will have worked out was the reason for her disappearance (though, to be fair to them in this regard, here the reader does have the advantage of Wagendorp's clumsy writing in which major plot points are so obviously sign-posted). But that's the kind of novel Ventoux is. The reader is required to tether their disbelief to a helium filled balloon and let it float away on the wind, over the horizon, out of sight and out of mind, while Wagendorp flat-footedly shuffles toward his big reveal.

Piss-poor plotting is the least of Ventoux's problems. Wagendorp practically begs the reader to see him as being in the same league as his compatriot Tim Krabbé, whose The Rider inspired a fifteen-year-old Bart to buy a Batavus and take up cycling (he'd previously taken up cycling a few years before, when he was six and Mercxk won his second Tour, but then took it up again when he read Krabbé and bought the Batavus). He also has a young Joost quote liberally from Krabbé (leading Peter to tell him to "Leave it [...] I don't like all that quoting. Think of something yourself", a jolly jape at Joost's expense given his plagiarism problems in adulthood but also a fitting critique of Wagendorp's borrowing from Krabbé). But whereas Krabbé took something complex and made it seem very simple, all Wagendorp manages to do is to take something very simple (BFFs reunite on a road trip) and tart it up with a failed attempt at complexity, there being a half- hearted effort to use string theory to explain how the friends are trying to build a bridge to the past. Here's Bart, getting all deep and meaningless:

"Everything happens simultaneously; time is no more than an ordering, an illusion. Joost says that time doesn't exist, André has a painting on his wall about movement that is stasis, while I'm trying to make time stand still. Our friend Peter had to knock on the door of the love cabins on his father's brothel boat when time was up. There were men who only came when he knocked."

Wagendorp, though, soon tires of this and gets back to dragging out and out and out the novel's (not very) big reveal (or maybe he's actually doing the reader a kindness and putting off and off and off the ending, a sickly sweet affair so sugar coated it ought to come with a diabetes warning).

Where Ventoux fails the most in its attempts to ride on the coat-tails of Krabbé is in not even understanding Krabbé. Take Wagendorp's use of the eponymous mountain: never does he explain why the friends became interested in the Ventoux in the first place, why it and not any of the many other mountains they could have picked. All that Wagendorp does to build mystery around the mountain is associate it with the death of Tom Simpson ("the Jesus of cycling, who suffered for all doping sinners and died on the Bare Mountain."). Again and again and again and again we get Simpson, Simpson, Simpson: a (mythical) drink and a last shit in a bar in Bédoin before tootling up the mountain to die, nothing more. In this Wagendorp's group of friends are of a type with the roadside fan Krabbé railed against in The Rider, people for whom "road racing has gone into the cement mixer of journalism and come out again as the courage of the lone rider, as Poupou, doping doping, today the domestique must shine, Simpson on Mont Ventoux." They belong, in the words of Krabbé, to "the generation of emblems."

Being of the generation of emblems is not just true of Wagendorp's characters. It's true of the author himself. Of the six friends, beyond that one of them is bald and another black, all that is really known of them is logos: they ride bikes from Pinarello and Pegoretti and wear jerseys from Rapha and suits from Paul Smith. Roland Barthes, while talking of the Tour de France, wrote that a rider's name "forms the chief figure of a veritable poetic language, making legible a world in which description is finally useless." Wagendorp is one of those novelists who lives in a world in which it is brand names that have rendered description useless, leaving him free to tell the story primarily through dialogue. Or, as it's known in the trade these days, banter: men talking bollix to other men ("Prick still completely in order?").

The dialogue is where Ventoux's roots are most obvious: it began life as a film script. There are other clues to this, notably the pages of the novel being filled with references to period music (Elvis Costello, Kate Bush, The Police, The Clash, Dexys Midnight Runners and more). I can imagine all this actually working in a film, the music and the scenery distracting you from the trite plot (although the film, when it did actually appear in 2015, received only a lukewarm reception in the Netherlands, unlike the book). On the page though, it does all rather fall flat. All you have to focus on is the words and the plot. And, to borrow from the budding poet and sometime cinephile Peter critiquing the films of Sergio Leone, that's "all false sentiment and also fairly improbable."