A cycling anthology written by women, about women ... but not for women?

Share All sharing options for: Ride the Revolution, edited by Suze Clemitson 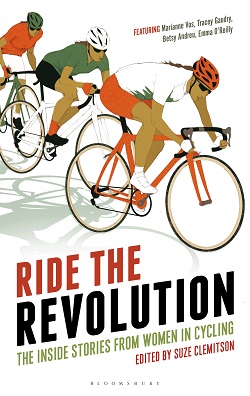 "The opposite to patriarchy is not matriarchy, it's fraternity."
~ Germaine Greer

"When Marie Marvingt decided to ride the 1908 Tour de France she was told 'absolument, non!' by M. Degranges [sic] and the Societe du Tour de France1. Instead she rode each stage 15 minutes after the official race had departed and finished all 4,488 kms of the parcours - a feat that only 36 of the 110 men who entered the race could equal. Her motto? 'I decided to do everything better, always and forever.' It's in the spirit of Breakneck Marie that this book has been written."

So begins the publisher's blurb for this collection of articles by women about women's cycling. By and about does not - it has been stressed - mean for. But having made the argument when reviewing the Cycling Anthology books that the little boys' club there does suggest to some that it's by men, about men, for men, let's ask the question of Suze Clemitson's little girls' club: is it just writing by women about women for women? According to the blurb, no: "This is not an anthology of women writing about women's cycling." What it is is "the best new writing on cycling from women involved in the sport".

What are the stand out articles that justify the cover price (as with the Cycling Anthology reviews, let's not pretend that you can be expected to read this cover to cover and think everything worth the effort - you certainly don't do that with a cycling magazine, you rarely do it with any of the other cycling-related anthologies)? The stand out piece has to be Connie Carpenter-Phinney talking about her career, first on skates and then on bikes:

"In an instant, my life changed and for the first time, I belonged. It was my first sports team. Sport gave me an instant sense of community and a purpose that had structure: a season filled with meets scattered between Champaign, Illinois, and St Paul, Minnesota. I was hooked on the lifestyle: packing into someone's family car to go to a race because my parents were generally and understandably consumed by hockey. Speed skating was a family sport and I believe that is why women have always had equal opportunity in the sport. It was never questioned, and no one ever complained about having me crash in their hotel room and share their snacks."

Through Sheila Young (now Ochowicz) Carpenter got sucked into cycling:

"I raced a lot when I started out; it is one aspect of the sport that allowed me to get good fast. Coming out of a winter sport with a short season that depended on frigid conditions (all long-track speed skating was outdoors until the Calgary Games of 1988), it was a pleasure to race as often as five times in a week in the summer. Two nights a week, I rode the track in Kenosha and Northbrook. The track series were always fun and diverse, including many attempts by me to ride the team even known as 'the Madison' with an intrepid male or female partner. One night a week we had an intense mash-up club rave on the roads of an abandoned military base outside of Madison. Those races honed my cornering and breakaway skills - and put me right where I needed training-wise - on the rivet. And on the weekend, there were races in and around the Midwest. Cycling always had a festival-like atmosphere. It was fun."

Victory in the women's Coors Classic - the Red Zinger, as it was at the time, sponsored by tea makers Celestial Seasonings - came quickly, in 1977, but was followed by two defeats at the hands of Keetie van Oosten-Hage (ten years Carpenter's senior and a multiple world champion). Carpenter was motivated to try harder, and recruited friends from Madison to join her in the growing women's peloton (Beth Heiden was among them and she went on to win the world championships and the Coors Classic) and, after taking some time out from the sport in order to complete her degree, Carpenter took her second Coors title in 1982. Two years later Carpenter was the winner of the inaugural women's road race at the Los Angeles Olympics, and the first American cyclist in seventy-two years to win a cycling medal of any hue. After which, she hung up her wheels. Arguably, in her time as a racer, Carpenter did as much to promote cycling in the United States as Greg LeMond did.

What else have we got in Ride the Revolution? Chris Garrison opens a tale about the special power of invisibility women working in bike shops have with an arresting sentence: "I was wrist deep in grease while in the middle of a hub rebuild for a customer." I was almost expecting some big palooka to walk through the door, gat in hand, and shoot someone. Instead, the scene went like this:

In a choreographed move that'd I'd done many times before, I stood up from my perch, turned around with rag in hand, and asked the customer how I would help him. It's important to note at this point that I was wearing a shop apron, and the distance from the workbench to where the customer was standing spanned about nine feet. My work was clearly visible.

His reply to my offer of assistance was that sentence of seven words It led to one of those rare times when I was at a loss for an instant comeback of any description. I had to process whet he said, and it sent my mind into a whirling dervish of thoughts, mostly in an attempt to make sure I understood what I'd just heard, in the face of all the evidence in view of the customer.

'I need to speak to a mechanic.'

Invisibility and ingrained ignorance are just some of the issues that crop up several times across Ride the Revolution's pages. One of the perennial issues with women's cycling - and here let's firmly park the pretence that this isn't a book about women's cycling - is the financial inequality that underpins the sport. Women are expected to race practically for free, with wages and prize money lagging well behind other parts of cycling. It is surely regrettable then that the same iniquity should underpin a book about women's cycling. For despite being published by Bloomsbury - revenue to February 2016, £123.7 million, profit £13 million - at least some of the contributors here were asked to submit content gratis. I would have liked to be able to explain here how this could be justified but when I approached Clemitson about the matter all I got was a no comment. Some things, it seems, people just don't want to talk about.