Widowed for the last five years, and in ailing health for a decade before that, octogenarian George feels that his daughter Thérèse would jump at an opportunity to put him in a home. But when she disappears to Peru for two months it's he who's jumping, at the chance to make a long-held dream real: to follow the route of the Tour de France. Accompanied by his septuagenarian neighbour, Charles, George sets out in a Renault Scenic, intent on driving all 3,500 kilometres of the 2008 Tour route (plus extra for the between stages transfers). When his London-based granddaughter Adèle discovers what he's up to George buys her silence by promising to send her daily texts informing her where he is and how he is. Resistant at the outset to the thought of embracing modern technology, George is soon throwing himself into text messaging and text-speak as his road trip helps Adèle and he bridge the distance and the years that separate them, eighty-something grandfather and twenty-something granddaughter finding a new connection, 160 characters at a time. 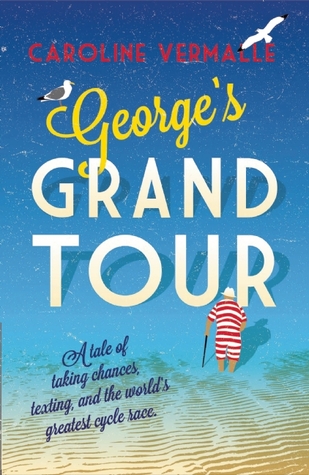 Title: George's Grand Tour
Author: Caroline Vermalle (translated by Anna Aitken)
Publisher: Gallic Books
Year: 2008 (translation 2015)
Pages: 191
Order: Belgravia Books
What it is: Neighbours George and Charles take on the task of driving the route of the 2008 Tour de France despite their combined age of 159 years
Strengths: Short and tender, Vermalle's tale brought tears to my eyes and a smile to my face
Weaknesses: Blimey? Gosh? Old chap? Vermalle and her translator successfully evoke a sense of place but the translated dialogue feels more British than French

An aged man is but a paltry thing,
A tattered coat upon a stick, unless
Soul clap its hands and sing, and louder sing
For every tatter in its mortal dress
~ WB Yeats, Sailing to Byzantium

If you've been reading these Café Bookshelf pieces for a while you might guess that Caroline Vermalle's George's Grand Tour is the sort of book I would normally steer clear of. This certainly has been true of me in the last two years, when I have consciously avoided books, films and plays that touch on some of the things dealt with by Vermalle in this novel: when reality usurps the power of fiction, repression can be more preferable than confrontation. But there are times when you break your own rules. One of those times is when serendipity tosses things in your path. As she did here. I went in to Hodges Figgis looking for Dimitri Verhulst's The Misfortunates and on the shelf where it wasn't found to the right of where it should have been George's Grand Tour, so left with that instead. And then spent an enjoyable few hours reading it. With moist eyes and a smile on my face.

"His patched-up body was holding up, admittedly with a little discomfort, but holding up all the same. But the man inside had been in bad shape for a long time. Having more or less admitted defeat, he had sat back and waited for the doctors' prognoses to come true, for the statistics to be proved right and the odds to catch up with him. But they never did. So he had decided to go out and face the odds head on. Eighty-three years old, one set of aching limbs, three thousand five hundred kilometres and a two-month expedition."

Three days into his adventure George gets rumbled by Adèle, his somewhat estranged granddaughter:

"For three days he had been feeling more like himself, his old self, only to become once again the doddering grandpa with all his aches and pains, who was not to do anything in case he got too tired, and did himself harm. It was his own fault: he had so often indulged in the comfort of other people's sympathy. It had never made the pain go away, but it had made him feel less hopeless. Now what he really needed was freedom, and, surprise, surprise, he found that he was refused it."

"When she was little, she had been given a 'Grandpa Kiki', the grandpa version of the soft monkey that had been such a craze in the eighties. Grandpa Kiki was grey all over, with glasses, a three-piece suit and a pair of carpet slippers. Since then, she had always pictured her grandfather as a Grandpa Kiki, who just sat in his box, and whom she could send the occasional card out of habit and politeness. And here he was jumping out of his box at the age of eighty-three! Grandpa Kiki dancing Saturday Night Fever. The mental image made her smile."

How, you might be asking round about now, does the Tour de France fit into all this? The answer to that is that it does and it doesn't.

The Tour itself features very little beyond providing a structure for George's adventure. Of Tour lore, there's a mention of Abraham Olano and the Passage du Gois. There's a pleasant little paragraph about Breton cyclists. There's a nice anecdote about Pierre Brambilla. There's the Louison Bobet museum in Saint-Méen-le-Grand. When you consider that George was born in the year Ottavio Bottecchia won his second and final Tour, when you consider that George lived through the reigns of Anquetil, Merckx, Hinault, Indurain and Armstrong, when you consider that George lived through the ersatz Tours during the Occupation and after the Liberation, well that's not nearly as much as you might be hoping for, given the title1.

And yet despite telling you very little, George's Grand Tour tells you much more about the Tour than a lot of other books ever manage. It does this by quietly offering a glimpse of the place the Tour has in French culture, the real meaning of the Tour. This is a meaning that we cycling fans have a tendency to forget, obsessing as we do over the relative greatness of champions past and present and knowing how many left-handed brown-haired green-eyed Geminis have doubled the Critérium International and the Clásica San Sebastián in the same season they wore the rainbow jersey and won a stage in the Tour.

To explain that place, here's something Vermalle wrote by way of a word of introduction to the book on the publisher's website:

"The Tour de France as a sporting event never really interested me. But, when my brothers and I stayed at my grandparents' for the summer holidays, we knew the Tour was on when the TV was loud and an air of masculine camaraderie filled the house. There were friends, farmers, cousins, neighbours and more than a few earthy oaths. The conductor in this boisterous affair was my grandfather, the shortest of them all, and by far the merriest. For me, the Tour de France is not about yellow shirts or a race against time, but rather the memories of slow and happy days and the summery flavour of togetherness."

Slow and happy days and the summery flavour of togetherness, for more people than we care to admit they are the real meaning of the Tour de France. And they are the real story of George's Grand Tour. Despite its brevity (it doesn't even stretch to two hundred pages) Vermalle does not rush the telling of the tale, George and Charles dawdle their way through the Vendée and Brittany and onwards, each stage of the 2008 Tour taking them around three days to drive, with time off for sight-seeing and enjoyment of the local food and alcohol encountered along the way. George's Grand Tour proceeds at the gentle pace of mid-Tour transfer stage, not the pell-mell of a big bunch sprint.

Vermalle's telling of the tale has an almost faerie tale quality to it, reminding me of Daniel Pennac or Neil Gaiman, story-telling for people who like stories that are told proper. It's charming, in the beguiling sense, Vermalle drawing you in as she goes along. Vermalle's telling of the tale is also somewhat didactic, George's Grand Tour coming packaged with messages about growing old and the way we treat the elderly, messages about the joy of reconnecting, of rebuilding bridges fallen into disrepair through disuse. All good faerie tales should come with a moral. And, as Neil Gaiman would insist, all good faerie tales should come with a hint of darkness. Here, it is no surprise to the reader when George's grand tour is curtailed, Vermalle tells you that is going to happen in the opening chapter. She also drops plenty of clues that George's neighbour Charles has his own reasons for undertaking their joint adventure. George's Grand Tour doesn't build to a dramatic denouement, but it is cathartic for all involved. Including this reader.