Around Ireland, on a bike. 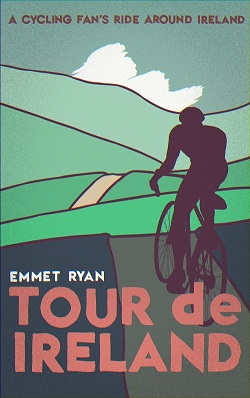 Title: Tour de Ireland - A Cycling Fan's Ride Around Ireland
Author: Emmet Ryan
Publisher: Velo Em Books
Year: 2014
Pages: 199
Order: Velo Em
What it is: An account of a sixteen-day bike ride around Ireland in 2012
Strengths: If you're travelling round Ireland Ryan is the man to tell you some factoid or other about the places you pass by or through
Weaknesses: It never really pauses for thought, confuses forward momentum with travelling

I once rode around Ireland on a twelve hundred kilometre Audax adventure. Somewhere coming up to closing time on the third night, with the end only about four hours north and familiar roads ahead of me, I had my greatest ever défaillance: the spirit and the flesh equally unwilling to complete the task at hand. Since that night - having theorised that I was in fact dizzy from having spun around the country too quickly and that such a fate can therefore befall all who seek to circumnavigate the island - I have managed to think kindly of all who seek to circuit the country, from the likes of the Halls and Thackeray in the nineteenth century through Tony Hawks in the last one and and on the author of this twenty-first century travelogue that's been sitting on my desktop for a while now, Emmet Ryan.

Having talked so much so often to so many about cycling around Ireland one day Ryan found himself setting out to undertake just that task:

Mother of Divine Holiness - what are you actually doing? This would have been the opening question in the little chat I needed to have with myself, but the palm of my hand was pressing a peeled banana into my open gob when the thought came. I was late. I was running late at least and breakfast was running after me. I didn't know where exactly I was going, but I knew I was late. Sleeping in on the day you intend to begin a bike ride around Ireland wasn't an ideal start. Rushing out the door wasn't either, but it was done and before the banana was down, I was on the road. The waiting was over. My plan had given birth to action -the umbilical cord severed by the shutting door behind me. My wheels were turning. I was out and gone.

‘Just one stretch of road at a time' I told myself - (and if that's too far), ‘just one pedal stroke at a time'.

Pretty much immediately we're into the meat and two veg of Tour de Ireland - factoids:

I came upon Drake's pool, an area of the river concealed from the nearby mouth of Cork's harbour. It is said that Sir Francis Drake hid there in his ship from the Spanish Armada back in 1580. I'd have happily hid myself at this point - back under the covers of my bed - but I couldn't. The theory of being happy had given way to the practice of being tired and a bit anxious. My calm surroundings were not rubbing off on me and I seemed to be the only one up. I questioned again what I was doing. Do I really want to spend the next two weeks riding a bike around Ireland? I wasn't fully convinced. I'd been more than adequately convinced for nearly a year when I was mouthing off to my mates, but now, I just wasn't sure.

Only a short distance further, I arrived at Crosshaven, a village of sea stories (and the odd fib). I passed Royal Cork Yacht Club. This is the oldest yacht club in the world (founded in 1720) which attracts many visitors for ‘Cork Week', Ireland's largest sailing regatta. It's the oldest yacht club in the world if you're from Cork that is, but if you're from Finland or Russia or if you're even okay at adding and subtracting, then Neva Yacht Club in Finland is the oldest in the world. It was founded in 1718. Now I'm no mathematician, but it felt good to know that people around here weren't going to let any facts get in the way of a good story. I pushed on.

Such stories come at you hot and heavy throughout Tour de Ireland. Also peppering the pages are stories about Ryan's passion for professional cycling:

There were many reasons why I'd now come inland and away from the coast: the coast tells only part of Ireland's story and I'd ridden a lot of it already; Kilkenny itself is a big attraction and this inland route helped me stay within my two-week-holiday (16 day) limit; most importantly however, if you're a cycling fan paying homage to your heroes, you can't really do that in Ireland without visiting the inland town of Carrick-on-Suir. Sean Kelly, a native and resident of Carrick, was the sole reason for me wanting to head there. He is quite simply the greatest cyclist ever to come out of these shores. A few Dubliners might well disagree, but that's probably as much to do with the superiority complex within the Pale, than anything based on actual reality. Indeed Sean Kelly is one of the greatest ever to have ridden a bike.

Kelly's nickname maybe wasn't as colourful as ‘le Gentleman', ‘le Blaireau (the Badger)' or even ‘Spartacus'. It was simply ‘King Kelly'. This is enough to leave us in no doubt as to how high a standing he had in the 1980s peloton. Kelly was the ‘King of the Classics' and if he was the King, then I as a fan, am happy still to be one of his subjects.

The people you meet on your travels are an important part of travel writing. Here's Ryan, lost in Dundrum and meeting the local populace:

I got going quickly and felt surprisingly good. Before the suburbs came, I took in the soothing statue of Patrick Kavanagh as I crossed over the Grand Canal. This slightly made up for not going to Inniskeane. I was glad to acknowledge him too on this trip, but soon I found myself south of the city and in Dundrum. This was a village in its own right but it has been hugged into the city by the outstretched arms of a growing urban Dublin and is now a suburb itself. There were signs of life too, which was encouraging because when I arrived at the shopping centre where I believed the Roche monument was placed, there was no sign of it at all. I rode around for a while but couldn't find it anywhere.

‘Do you know where the Stephen Roche monument is?' I asked a man out walking his dog.

‘Don't worry about it,' I said and moved on.

Another man, who sounded like a Dubliner, had no idea who this Roche character was at all. I was getting concerned now. Surely the last twenty five years weren't a dream?

‘The Stephen Roche monument; do you know where it is?' I finally asked an old lady by a bus stop who I just felt would know.

‘Oh yes, I remember that. I think it was there,' she said pointing to an area of bushes by the shopping centre's perimeter fence.

‘They took it away I think, maybe moved it, but I'm not sure where they put it.'

‘He was a good cyclist; didn't he win Tour de France? But he split up with the wife I heard. That's terrible. She was a lovely young one.'

Her knowledge certainly made up for the others' bewilderment, but she was almost as stuck in the past as I was.

The Stepehen Roche steele in Dundrum

The road is also a good place to meet people:

I rode down to Stepaside, passing close to where Leopardstown racecourse is. There I could feel the mountains breathing before me and the road began to rise almost immediately. Flanked by woodlands of evergreens, I caught up with a cyclist who was on his Sunday morning ride.

‘The wife's been away all week, so I've been out with the lads a lot. I'm wrecked but I needed the air. Not a long one, no. Where are you off to?

‘That's a good spin - about 90 miles from here. You're doing a bit of credit card touring is it? I used to do that myself, until the wife took the credit card'.

‘I am, but I haven't ridden in the Wicklow Mountains before, so I'm not really sure which way to go. Do you know the Shay Elliot memorial?'

‘I do, that's past Laragh. A lot of climbing, I'll probably ride as far as Roundwood if you want to ride with me.'

This was great. I now pretty much had a tour guide - for some of the way at least. Dermot seemed strong on the bike but he was also just out to loosen his legs so we clipped along at a relaxed pace.

‘Have you been to Enniskerry?'

‘No, I've been to Ennis and Kerry but never both at once.'

This piece of brilliant wit didn't go down too well. Dermot looked at me like I was a bit dim, which I felt was at least arguable.

‘I'll take you there. It's where all the show-offs hang out and drink coffee instead of riding their bikes.'

We rode along in silence for a while, over Two Rock or Three Rock Mountain (I'm not sure which), but these are part of the collective Dublin Mountains. At the village of Glencullen, Dermot mentioned something about a giant's grave being nearby, but I'd had enough of that crap and gave the most unenthusiastic ‘really' I could come up with. This served only to solidify the impression of dimness he was now most certainly forming of me.

A teacher, Ryan is thirty-something and a graduate of University College Cork and London Metropolitan University. Having lived in the UK and South Korea riding around Ireland was his attempt to re-engage with a country he was somewhat detached from. Oddly, though, his own story seems somewhat absent from Tour de Ireland, the story of whether his strange kind of homecoming was a success or not, all the factoids from all the places he passes through or past crowd it out, bury it under layers and layers of Rough Guide raw material. The story actually told is all about forward progress, moving, moving, moving, always moving, always looking for the next sight to see or place to be. But then, many travel books tend to do that, I guess. Not everyone can be Bruce Chatwin. But it would be nice if some tried to be.