Last Flight of the Pigeon, by Simon Clode

Across China. On a bicycle.

Share All sharing options for: Last Flight of the Pigeon, by Simon Clode 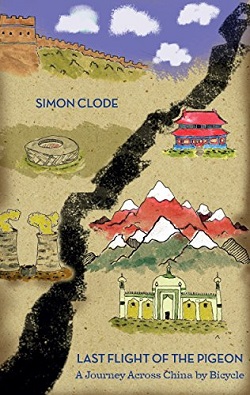 How easy it is to lose faith in a book #94 - self-deprecating humour in the copyright notice:

"Like it matters, but for the sake of argument this book is copyright material".

Flick to the end of the book, see if it gets any better:

"I am self-publishing and therefore you are lucky enough to not be reading the words of an affluent intern pro-bonoing themselves into someone else's job."

It actually gets worse:

"You can find more pictures of this journey and feel disgruntled for buying what is essentially just an extended version of a free blog here - www.lastflightofthepigeon.com."

Welcome to the world of thirty-somethings and their mamilogues. A world where a book's preface can anarchically appear at the back of the book:

"Achtung pedants! Here is your preface. It is a deliberate act of defiance that I've put the preface at the end of the book so as to not piss on the chips of non-pedants before they've started reading."

You really get to feel that Simon Clode respects his readers, don't you?

Clode's journey - across China, on a culturally appropriate bicycle - was undertaken:

"out of a desire to do something interesting, challenging, and fun; with full awareness that some of it would be boring. [...] It was not done for charity or in search of an epiphany. I just wanted to go on an amazing bike ride. The cycling happened as the book details, there is no miraculous recovery of broken bicycles for the sake of narrative, like some shoddy Sunday night motoring programme on BBC2. There is no editing in favour of, or against, anyone or anything. In fact, as the poor grammar will prove, there has been very little editing at all."

In the spirit of Tim Moore, Clode's journey was undertaken using culturally appropriate transport - the Pigeon of the title:

"The object of my desire was a Flying Pigeon PA-02, the best-selling bicycle of all time1. An icon, the PA-02 is the bicycle responsible for the stereotypes, myths, and that awful song about transportation habits in Beijing. Weighing slightly less than a tug boat, this single-geared embodiment of simplicity looks as though it was created using instructions no more technical than the road markings for cycle lanes. This isn't a bicycle, it's the bicycle."

After rather a lot - actually, an awful lot - of faffing about Clode gets himself a Pigeon and prepares for his journey across China on a culturally appropriate bicycle, east to west, Beijing to Kashgar:

"I plotted a route out of Beijing, through Hebei, into the grasslands and desert of Inner Mongolia, down into tiny Ningxia, before joining the Silk Road in Gansu, then finally travelling through colossal Xinjiang to finish in Kashgar on China's western border. It was a route that tested the full colour scheme of geographical maps, from the everyday greens and yellows to exotic purples. There were mountains, deserts, a plateau, there was even a depression."

That's the thick end of five thousand kilometres, with two months to get the job done in. Call it a hundred kilometres a day with wiggle room woven into the budget. However, this being the kind of book it is meant to be - a story of the triumph of hope over inexperience, a classic of British It'll Be Alright on the Night adventuring in which proper preparation is something to be scoffed at - Clode's ability to ride back-to-back metric centuries day after day after day was, well, questionable. His first ride on the Pigeon - 150 kilometres, give or take, from Tianjin, where he bought the bike, to his home in Beijing - was not very encouraging:

"After the ride from Tianjin, it had taken a full 48 hours before I could contemplate a gentle 2km ride to a café. It was not only the Pigeon who was not designed for long journeys. In my current state I would require 100 rest days, not ten."

After yet more faffing about - including a digression into the kitchen, Clode serving the reader several recipes as well as everything else - by page sixty-something the epic adventure, five thousand kilometres across china on a culturally appropriate bicycle, is finally ready to begin:

"I left Beijing at 6.30am dreading the second half of the first day's ride, which would involve getting the Pigeon over the mountains to Yanqing, some 90km away. With this in mind I left the story improving route out of Beijing, which would have taken me past Tiananmen Square and the Forbidden City to your imagination, and instead headed due north."

"Fixed up, I was on my slow and unreliable way. Almost immediately [...] the troublesome inner tube bulged out of a gap between the rim and tyre like a PE teacher's bollock from some obscenely small shorts. It was evident that the wheel couldn't take the direct weight of the panniers and me. The excess weight was causing the malleable steel rim to bend, which allowed the tyre to slip, leaving an escape route for the inner tube, which was inevitably leading to punctures."

It's rather a wonderful image, that, isn't it, a bulging inner tube being compared to a PE teacher's bollocks? Clode, it has to be said, has a particular, peculiar even, interest in genitalia. An early anecdote concerns an emperor's wife and her rather well endowed lover. Another deals with penile numbness. Even when serving recipes he manages to get his cock into the story, several times. All dreadfully, dreadfully Freudian.

Back to crossing China on a culturally appropriate bicycle. Seven hours and 40 kilometres into his journey, with yet more punctures to report, Clode's plan changes: his girlfriend is called in and she turns up with a Giant ATX860, returns home with the Pigeon and Clode continues on his merry way, across China on a culturally inappropriate bicycle: the workhorse of the former Democratic State of Taiwan and current state of perpetual political offence.

Sinophile's will love Last Flight of the Pigeon for its cultural digressions. Such as the one in which Jeremy Kyle (the British tabloid TV host) interviews Genghis Khan (the Mongolian emperor). Or there's the artifacts Clode finds along the way:

"Despite not yet hosting a global beauty pageant or giving birth to a synonym of mob, the Gobi needs less of an introduction [than the Ordos desert]. It is Asia's largest desert and the fifth biggest on earth. It's also getting bigger by an average of around ten square kilometres a day. A rate of expansion that means in just 40,000 years that the Gobi will have inherited the earth."

"Already emotionally all over the place or, to put it more honestly, absolutely shitting my festive pants, 2km from the centre of Huatugou another dog went for me. With no matches left to burn it was only the dregs of adrenaline and swerving around the road like Kevin Keegan on Superstars that saved me from being bitten. This was the final straw. Panting like a sixteen-year-old asthmatic who'd just lost his virginity to his own grandfather, I resolved to buy an anti-dog weapon the next day."

Eventually the whole thing ends the way it was supposed to - well, minus the culturally appropriate Pigeon of the title - and something nice happens and everyone lives happily ever after, or something:

"You will also notice that this story is lacking in any epiphanies or moments where I find myself. Upon my return to Beijing a new conversation developed with friends. How far? How sore is your arse? Are your balls ok? Were you scared? Were you bored? Did you get lonely? Do you really fancy Victoria Coren that much? And inevitably something like 'any great life changing moments?'

"Answers: 5000km, like 3200 miles or so; it's fine but I can't sit on wooden stools right now; yeah, I used plenty of Graham cream.... Graham as in Graham Gooch because, well, gooch, have you seen Jackass?; I'm not a huge fan of wild dogs; yes; yes, I mean a bit, but it's mostly for narrative in my blog; and finally, no."

How to describe the whole thing? Let's use the same words Clode used to describe Marco Polo's travel stories: "occasionally interesting but mostly mundane." And it could definitely do with editing.