A novel set it in the world of women's cycling.

Share All sharing options for: Wheeler, by Sara Zalesky 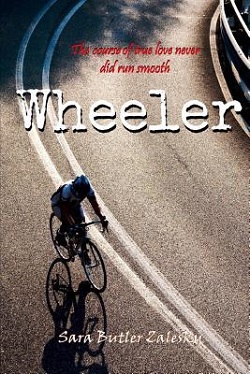 Title: Wheeler - The Course of True Love Never Did Run Smooth
Author: Sara Zalesky
Publisher: Sara Zalesky
Pages: 520
Year: 2016
Order: Sara Zalesky
What it is: A novel set in the world of women's cycling
Strengths: If you like cycling fan fiction this novel offers a veritable feast
Weaknesses: Desperately needs an editor with a blue pencil, a big blue pencil

"I wish...I wish I didn't feel so... Loren Mackenzie shook her head slightly, the wind whistling in her ears. I don't even know what I feel anymore. I should feel happy. It's not raining for once. She caught a glimpse of the cloud-dappled mid-morning sky before before the trees over the road blocked the view. What's wrong with me?

"The recently paved road was as smooth as glass as Loren and her Innovative Design Cycling teammates headed south through Essendon. The route chosen by the team's Directeur Sportif took a meandering track through rolling hills and quiet country roads back to IDC's training facility in Enfield."

"It might be cliché, but I do love New York, Graham mused. If it weren't for the hours of useless meetings I could have gotten a run in at Central Park. He ran his hand through his hair. The original script is perfect but they keep mucking with it. Lucky for me, Benny agreed and was able to lend a hand. We're finally set to begin filming in August.

"He exhaled with a groan. I still have all that unpacking to do but that's what I get for trying to move myself. His lip curled in rebellion. I do what I want. He stepped a little harder on the accelerator and a wide grin flashed on his bearded face as the engine growled over the twisty country roads.

"It's going to be a beautiful day. He opened the sunroof and all the windows to let the wind ruffle his sable hair."

"Swearing and shaking out her hand, Loren stood up and turned her flinty stare to the Good Samaritan. Oh my... Her eyes grew wide and her brain shut off at the sight of him.

"He was tall and lean, a bit too thin for her tastes, although the darkwash jeans he wore outlined the muscles of his long legs. A beat up pair of brown cowboy boots adorned his feet. He wore a slightly oversized and faded red, blue and white plaid oxford shirt, open to the third button. His sunglasses hung from the placket, showing a bit of his chest. His wavy brown hair was tousled and in need of a trim, which gave him the roguish look she adored.

"I would know those crystal blue eyes anywhere, she thought. And that grin, even hidden by a goatee. How many times have I daydreamed about... That's Graham MacDougal Atherton, the movie star. Oh, I'm gonna be sick."

And so it begins. A love affair born in the gap between Philadelphia's International Cycling Classic and England's Aviva Women's Tour and will boil and boil away until the World Championships (and beyond...). A love affair whose course runs as smooth the road through the Arenberg forest. A love affair like a giant roller-coaster, the sort you want to get off because it's scary and then as soon as you're off you want to get straight back on again. The wanting to get on and off and back on again, that's because Loren comes carrying baggage. A whole set of Samsonite bags: big ones, small ones, bags with straps, bags with wheels, bags all packed so full with daddy issues that she has to sit on them to get the zips to close:

"She remembered the look in her father's eyes as he stood over her... 'No!' she screamed. 'I will not remember!'

"Loren shook her head and hammered onto the pedals. I'll be safe if I run. I have to run!"

"The Frenchman, at 38, was every bit the Grand Tour Champion he had been at his peak. Four years into retirement hadn't changed his lean physique. There were no grays or receding lines to his closely cropped dark hair. The media still referred to him as ‘l'Assassin', because of his ability to attack out of the pack when the leader least expected it. Fans lined up for his autograph at races."

Felix has feelings for Loren. And issues of his own:

"Loren had been racing with GTS Pro Cycling in Colorado for almost a year when they met during winter training. She had been completely star struck by him, and Felix was equally attracted to her. He doggedly pursued her, attempting impress her with ski trips to Tahoe and expensive gifts.

"When she didn't respond favorably, he revised his tactics. Felix studied her, spent time with her and eventually won her trust. But he soon became impatient to take their relationship to a more intimate level. When she rejected his advances, he became violent."

"'No!' Loren yelled, feeling the rear wheel of her bike disappear from under her. She slammed into the tarmac on her right side, her helmet striking the road. On impact, she was separated from her bike and both slid across the ground and into the metal barriers. The still spinning tire ricocheted the bike off the gates to strike her in the face and chest.

"Somehow, Loren stayed conscious. Get up! You can't continue if you don't get up. She forced herself crawl out of the twisted metal and struggled to stand on shaky legs, pain and dizziness narrowed her vision. She stumbled the few feet to her broken bicycle and slung it over her uninjured shoulder to limp the few yards to cross the finish line.

"She collapsed, trembling with shock. She was cut and bleeding in several places, most notably her nose. Loren opened her eyes as two strong arms lifted her and carried her to the medical tent. It was Felix. I should be fighting, or at least complaining. The darkness of unconsciousness smothered any further thought."

Mix that lot, stir for five hundred pages and presto! you've got yourself a cycling novel.

Wheeler feels mostly like a piece of fan fiction that's been allowed to grow and grow and grow. It's still actually growing: while the story here reaches a conclusion of sorts the door is kicked wide open for the sequel the author is already working on. The problem with the way it has grown and grown and grown, though, is that Wheeler really needs to tone itself up if it's ever going to be sleek, svelte and hitting the sort of racing weight you can enjoyably speed through. Clocking in at 190,000 words too much of Wheeler feels like a hard day in the mountains. With yet more to come you do get to thinking the sort of thoughts Oscar Wilde did about the Victorian fad for three-volume novels. But, as with too many of the self-published cycling books I get to read, there's little or no evidence of anyone playing the role of an editor having had a look in, no sign that someone's wielded a blue pencil and struck out needless adjectives, plot lines or expository dialogue. That criticism made, I am sure there are people who will enjoy 500-plus pages of fanfic cycling and will look forward to the adventure continuing: somewhere within Wheeler's 500-plus pages there is an interesting take on the sport of cycling.