A Curl Up and Die Day, by Frank Dickens

From the creator of the Great Boffo, a cycling novel set against the backdrop of the 1965 World Championships.

Share All sharing options for: A Curl Up and Die Day, by Frank Dickens 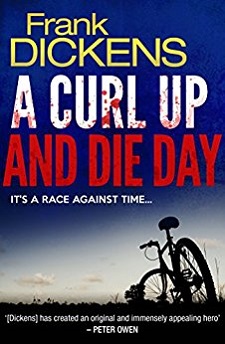 Title: A Curl Up and Die Day
Author: Frank Dickens
Publisher: Endeavour Press
Year: 1980 (originally published by Peter Owen, republished by Endeavour 2016)
Pages: 119
Order: Endeavour Press
What it is: A brief novel from the man who gave the world the Great Boffo
Strengths: Dickens knows how to tell you a story, knows how to keep you paying attention even when very little seems to be going on
Weaknesses: It does in places feel almost - but not quite - as dated as an episode of Minder on ITV94 of a Sunday morning

The year is 1965. The place, San Sebastián, the Basque resort in the Bay of Biscay. The occasion, cycling's world championships:

"The Lasartes bicycle racing circuit follows the overhead tram lines through and around the hills south-west of San Sebastian and it's that easy it's downright criminal. It's a world champion we're trying to find, after all, and anyone that's been given the whole of Spain to choose from and comes up with a circuit like Lasartes ought to be done for negligence. A course that's been sorted out for the Worlds ought to have a climb in it somewhere, and when I say climb I'm talking about the sort that rears up on its back legs and looks you straight in the eyes and dares you - and when you think you've got it licked there's a sudden bend and up she goes again. That's what I mean by a climb. Not that droopy drawers thing as you come out of Andoain in the back straight, I'm thinking as I stand looking down through a criss-cross of tram and telephone wires onto the village of Andoain on the afternoon of the amateur road race, waiting for the riders to show on their fifth lap. Trouble is, these days they pick the courses more for the spectators than the riders."

The narrator there is Dicks, a former Olympic-level track rider now earning his crust as a strip cartoonist. A Londoner, Dicks is married to a woman from Burgos and while she's visiting her parents he's away playing cycling, watching the Worlds go by. Until a Soviet cyclist stumbles into his life:

"I hear a spoke go and then there's a lot of crashing and then the place is like a battlefield with bodies and bikes everywhere.

"The two Italians are sitting in the middle of the road struggling with their toestraps, the Spaniards are trying to sort their bikes out, the French boy is surrounded by a crowd of spectators and I'm dragging the Russian on to the verge and throwing my jacket round his shoulders, which is something you do automatically when there's a pile-up.

"I run my eye over him. Nasty graze on one knee and claret all over his elbow, but nothing to write home about. Not that I'd cry my eyes out if he'd lost a leg. I don't want to know about anyone who rides the way this character rides. See my arm? Result of someone switching at Fallowfield a few years ago. I ask him if he's all right, but he sits there and stares at the ground, as if he doesn't know whether he's coming or going, so I don't give much more thought to him because the main bunch are storming up the hill and I'm sprinting after the British boys to give them a shout. Not that they take any notice, because they're eyeballs out trying to keep up with the peloton who are really steaming.

"And as soon as they're over the top I'm cursing myself for being so bloody active, because the blood wagon's pulled up back there and they're bunging the Frenchman and the Russian inside and before I can get back to grab my jacket they're off and I'm cursing, not because I think anything'll happen to the jacket, but because it'll mean no end of chasing about after the event. Pity he didn't break his neck, I'm thinking. With broken necks jackets aren't necessary."

The jacket, it's eventually returned, bringing with it the Russian. Who is quickly followed by a ghost from Dicks's past, last encountered in Rome some years before:

"I was there to take part in the Olympic track cycling events. The day before I'm watching the road race and find myself standing next to this Swedish shot-putter called Lars Pederson, who tells me the Swedish cycling team will walk it. I jokingly tell him he's talking through his hat and he takes offence. Just like that. Wham! You probably read about it. The papers were full of it. I'm two days in bed with concussion and we're both out of the games. Me with a sore head and him sent home disciplined. I never raced again. What the hell. I trained for three years to win in Rome."

Pederson is in San Sebastián on his honeymoon and his wife, Ingrid, quickly catches the eye of Dicks. There then follows a curious tale involving Dicks, the two Pedersons and the Russian, a tale in which nothing much seems to be happening but in which everything is building toward a neat ending which puts an alternative spin on all that's gone before.

The plot though is not the only reason to want to curl up with A Curl Up and Die Day. This is a story told by Frank Dickens, author of The Great Boffo, a man celebrated by many who knew him as a great raconteur. This is a story told by a man who has a way of talking that keeps you listening, even when nothing seems to be happening. There's a description I read one time of the painter Jack Yeats, I think it was John Millington Synge said it, his writing was likened to listening to a rambling talker who doesn't give a rambling damn whether you listen or not but produces at intervals some extravagant remark or vivid verbal sketch that makes you glad he'd dropped in. Something similar could be said of Dickens. Take this description of the professional road race, which starts off with a description of the crowd noise and builds:

"And if you add to that roar the blare of music from loudspeakers, the crackled announcements, the racket of service vehicles, the splutter of the outriders' motorcycles, the cries of men selling ice cream and hotdogs and rosettes and racing caps, and the thrashing of the TV helicopter hovering overhead, you'll get some idea of the din.

"And if you could take that din and mix in the greys, browns and mustards of the crowd and the drab greens of the police and the dark blues of the outriders and the creams of the service vehicles and the brilliant reds, yellows, scarlets, blues and greens of the riders' silk jerseys, with their black shorts and shoes and white ankle socks and their tanned limbs and faces, and throw in the racing bicycles themselves so they glitter in the sunshine like tinsel, you'll get some idea of the spectacle.

"And if you could take that din and that spectacle and douse them in the smell of embrocation and oiled machines and the reek of Spain on a hot day and pour the whole mixture over the mud-coloured houses of Oria, so it spills into the side streets as well as the main road, you'd get some idea of the start of the Professional Road event and how it comes across as we push our way towards the roped-off control where mechanics and masseurs and team managers and assorted hangers-on are buzzing around."

One reason some could offer not to want to read A Curl Up and Die Day is that, as with Ralph Hurne's The Yellow Jersey which predated it by seven years, this is a novel that is very much of its time when it comes to misogyny and sexism. The same is equally true of Ian Fleming's James Bond novels of the 1950s and 1960s. The same is equally true of Kyril Bonfiglioli's Charlie Mortdecai novels of the 1970s. However, before we accept that whole swathes of novels from the past should not be read in the present, before we consign the likes of Dickens, Fleming and Bonfiglioli to the pyre, I think we need to look at misogyny and sexism today: personally I have more problems with contemporary crime dramas like The Fall and Ripper Street than I do with such novels from decades past. If you want a salve for the conscience, you could take the view some have of the original Bond novels and see satirical intent in the portrayal of characters here. Certainly Dicks, our narrator, is blinded by his libido, focussing more on Ingrid's bobby dazzler smile and her dazzling breasts than on what is actually going on around him.

For cycling fans, A Curl Up and Die Day offers a portrait of a world we know (unlike most cycling novels, which seem to feel the need to tear down the real world, throw out the heroes of reality and replace them with cardboard caricatures it's hard to give a damn about). Here's Dickens talking about the shortcomings of bike racing on TV:

"They don't come over as well as they might, because the people that push these things out concentrate on close-ups of bike wheels flashing round and legs pumping up and down and every other second a shot of spectators, instead of showing the man on the bike, which is what counts.

"I remember once watching the film of Coppi climbing the Puy de Dome in the '52 Tour. He was storming. On the way up he caught and dropped Ockers, Robic, Geminiani, Bartali and Nolten, one after the other, and you know how they showed it? Flashing wheels and pumping legs and telegraph wires — and when they ran out of telegraph wires they cut to shots of snow-covered mountain peaks. Mountain peaks, I ask you, when Coppi's riding like that! Ought to have their brains tested, some people."

This, I think, is the real beauty of A Curl Up and Die Day: you read on because you're enjoying listening to the narrator, his extravagant remarks and vivid verbal sketches make you glad he's dropped in.