The story of a soldier in peacetime and his fight to lay to rest the memories of war.

Share All sharing options for: Soldier, Spy, by Victor Gregg 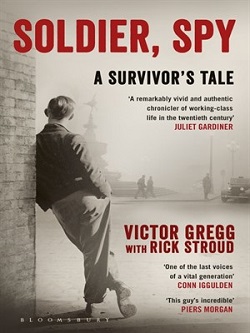 Title: Soldier, Spy - A Survivor's Tale
Author: Victor Gregg (with Rick Stroud)
Publisher: Bloomsbury
Pages: 239
Year: 2016
Order: Bloomsbury
What it is: A soldier's story, after he stopped being a soldier
Strengths: Frank and forthright, brutal and touching
Weakness: In theory this is just the latter part of Gregg's earlier book, Rifleman, with the post-war adventures fleshed out

Born in 1919 Victor Gregg joined the army when he was 18 and served with the Rifle Brigade, serving in India and Palestine before the outbreak of the Second World War. That took him to Egypt's Western Desert where, in 1940, he put into practice the art of killing he'd been thought, part of the attempt to push back the Italian advance in North Africa. In 1942 he fought in the battle of El Alamein: the Desert Rats versus the Desert Fox. With Rommel defeated Gregg became part of the advance up the length of Italy. In 1943 he returned to England, where he rebadged as a member of the 10th Parachute Regiment and rejoined the fray. During Operation Market Garden in late 1944 he was captured near Arnhem, buggered by the bridge too far.

Offered the choice between a POW camp and a work camp near the city of Dresden Gregg chose the latter. In early 1945, having twice attempted to escape, the camp commandant sent Gregg and some of his fellow internees to work at a soap factory. Trying to sabotage the machinery there by switching cement for soap powder Gregg and his comrades caused a fire that consumed the whole building. The Germans, as they say in these situations, were not amused: Gregg was sentenced to be executed, to face a firing squad. Valentine's Day was the date set. Gregg's last night on earth was to be spent in a makeshift prison in the centre of the Saxon capital. It was the night that Dresden burned.

Serendipity plays strange games. It was when I was Googling around and writing the review of Martin Cathcart Froden's Devil Take the Hindmost that I first came across Victor Gregg's Soldier, Spy. I thought at the time that I should try and get a copy but didn't follow through. A few weeks later I was in my local bookshop collecting a copy of David Rose's Vault that they'd ordered in for me and I came across Soldier, Spy for the second time, a pile of copies of it on a table near the till. I noticed it but ignored it. Until I read Vault.

Vault tells the story of a former British soldier who, like Victor Gregg, had seen action in Arnhem. Like Gregg, back home in England Vault's protagonist became a spy, of sorts, playing the Cold War's spy games. And the reason I had noticed Soldier, Spy in the first place was that, as in Vault, Gregg had been a cyclist after the war, racing, part of the domestic British scene, riding in the era of Reg Harris and Alf Engers.

So I trudged back to the bookshop and picked up a copy. Two stories with no connection but so much in common, of course I was going to read both of them: art imitating life, life imitating art? I'll happily go there.

Vault was first published in 2011 but had been written nearly a decade before that. Soldier, Spy is the third part of a trilogy of books that also began in 2011, with Rifleman, which was much applauded for its first-hand account of the firebombing of Dresden. That was followed in 2014 by King's Cross Kid which fleshed out the story of Gregg's youth. Soldier Spy, adds more detail to the story of Gregg's post-war life told in Rifleman, to the story of the Cold War spy games he got caught up in.

That post-war life saw Gregg joining the Communist Party in London - the party was involved with the trade union he was a member of - and, through that, getting a job with a Russian bank, as a chauffeur for the Chairman. That was when military intelligence dragged him into their games of spy versus spy, with Gregg asked to keep the secret services informed of what their Soviet counterparts were up to in England.

Later in life, Gregg got sucked back into the spy versus spy game when the secret services took notice of his visits to eastern Europe for motorcycle rallies, and used him a couple of times as a courier. He himself, through friendships, became a conduit of sorts between between dissidents in Hungary and former military officers in East Germany. All his Cold War skulduggery, it may all have been low level stuff, it may not have played much of a role in bringing down the Iron Curtain - Reagan, Thatcher and the Pope claim the credit for that - but the 70-year-old Gregg was there for its death rattle, in Hungary in the summer of 1989, on one of his motor-cycling holiday:

"The town of Sopron stands on the border with Austria, just south of Vienna. On 18 [August]1 we were contacted by our Hungarian friends and told to look out for notices that were soon going to appear all over the town. Sure enough, before evening began to cast its shadows, small posters went up, stuck on lampposts, mail boxes and the walls of houses. The police took no notice of them, which was surprising, because the posters were advertising a 'Picnik' to be held outside the town and organised by the Magyar Party for Democracy which became better known as the Pan-European Union of the Hungarian Democratic Forum. During the evening the town continued to fill up with people from all over the east - Poles, Czechoslovakians, Bulgarians, and most obvious of all, the East Germans."

The following day in a field near the the border between Austria and Hungary a gate in the Iron Curtain was briefly opened and a picnic was held for people from both sides. Tim Moore, in his recent The Cyclist Who Went Out In The Cold, records how the event is memorialised today:

"The hectic scene was memorably captured in the commemorative site's photographic panels: what with their hair and the clothes, it looks like the opening of an unusually good-natured Black Friday sale, circa 1974. 'We're making history!" one of the 700 remembered shouting as he squeezed through the gate. He wasn't wrong. Before the Pan European Picnic the Iron Curtain's fate still hung in the balance; afterwards its days were numbered."

Along with the the border crossing being opened there was a symbolic cutting of the fence staged, with TV cameras from the West along to record what was happening. Gregg, he was encouraged by his friends in Hungary to take a wire-cutters to the fence, the physical expression of his small role in bringing down the Iron Curtain.

Cycling was, ultimately, why I picked up a copy of Soldier, Spy. Gregg's career as a cyclist was by no means fantastic: he was good, but not quite good enough. Maybe if he'd started earlier it would have all been different. Or maybe not. For those interested in cycling in those years, it is worth reading about for the chink if offers into a story that is slowly slipping away.

The most important thing about cycling for Gregg was that it afforded him a chance to quieten the demons that had come home from the war with him:

"I found a way to let off the anger I felt towards the world. Instead of blowing my top at people in authority I was now inflicting punishment on myself. For the first time since leaving the army there was a target to reach and every muscle in my body would have to work to help me reach the goal of winning everything in sight."

As interesting as the cycling history is it is Gregg's story of a soldier at war and a soldier struggling to cope in peace that is the most interesting aspect of Soldier, Spy. The war in general and Dresden in particular left Gregg mentally scarred. Adrenaline helped fight off the night terrors but the dreams still came back - "people burning in the street, flames reaching down from the heavens like huge claws, women flying in the air, their heads on fire, and worst of all the terrible tunnel from which I could never seem to escape. I have often woken bathed in sweat with the sound of the terrible screams in my ears."

Gregg doesn't fetishise the war the way so many do, he isn't about the noble sacrifice of a generation, he isn't all sombre saluting to fallen comrades. His is the other message:

"If by putting pen to paper I have played a part in bringing a halt to the idea that the killing of our fellow man can ever be justified, then the project can be considered to have been worthwhile. What more can a man ask as a requiem?"

You can listen to a BBC radio documentary about Victor Gregg here.