The authorised biography of Fabian Cancellara. 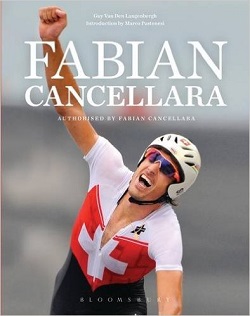 Title: Fabian Cancellara
Author: Guy Van den Langenbergh (with an introduction by Marco Pastonesi, translated by Rebekah Wilson)
Publisher: Bloomsbury Sport
Year: 2017 (first published in 2016 in Belgium by Cannibal Publishing)
Pages: 176
Order: Bloomsbury UK | US
What it is: Fabian Cancellara's authorised biography
Strengths: It's written for fans
Weaknesses: It's written by a fan

"He is a special character. He is very loud. He needs a lot of attention. He is a drama queen. He is a diva. He needs his special things. How is he like a diva? He would be covered in dirt and mud and shit after winning Roubaix, and he would be in the shower, and yell out that the towels were not soft enough."
~ Andy Schleck on Fabian Cancellara

You can tell a lot about people by the way they talk about cheating. Let's see what we can tell about Fabian Cancellara - four time ITT world championi, three time winner of Paris-Roubaixii, three time winner of the Ronde van Vlaandereniii, two time ITT Olympic gold medallistiv and one time winner of Milan-Sanremov - by the way he uses this authorised biography to talk about the doping that was a constant backdrop throughout his career in the professional peloton. Let's start with Cancellara meeting Luigi Cecchini, one of the three menvi credited with being midwives to the birth of Gen-EPO:

"The lack of scientific approach within the [Fassa Bortolo] team led a lot of riders to look for it elsewhere. It so happened that Fabian Cancellara came into contact with the Italian trainer Luigi Cecchini. 'At our first meeting I was overwhelmed, as overwhelmed as when I first set foot in Mapei centre. His office was full of posters of riders he worked with. And here I was, little old Fabian Cancellara, paying him a visit.'"

As with Tyler Hamilton, as with David Millar, Cancellara's experience of Cecchini is not what one expects of a doctor so often linked to doping:

"'He came straight to the point with me,' says Cancellara. '"If you've come here to find drugs to make you go faster, there's the door." He was quite clear. He never mentioned doping to me. Doping was never an issue for me.'"

Cecchini and Cancellara parted ways in 2006, after Operación Puerto broke:

"'Still, I'm not afraid to admit that, without all those stories, I'd still be working with Luigi today. Of course I asked myself questions afterwards. Why dope one rider and not another? Was it because he saw that I didn't need anything extra? I really don't know. I still haven't found a suitable answer."

Was ever a man so misunderstood as poor Luigi Cecchini?

Here, though, is the bit I love the most, Cancellara patiently explaining to the dumb schmucks in the peanut gallery why doping was never really an issue for him, answering his own unanswerable question about why Cecchini didn't discuss doping with him:

"I was indeed around at a time when doping was unfortunately a very topical issue, but you have to make a distinction between those who specialised in the Grand Tours and those riders who focused on the classics, like me. For classics riders, doping wasn't something that could make them better."

"And there's a second element: in the generation before me, doping was still organised at team level. I didn't experience that. Anyone of my generation who let themselves be talked into doping did so on an individual basis."

Cancellara ends his little homily on the purity of the Classics with this:

"You should also remember that there were very strict controls at that time, even within the team. At CSC, Bjarne set up an internal testing programme led by Rasmus Damsgaard, a well-known Danish anti-doping expert. But I was often tested outside the team too. In 2007, I was tested a total of 52 times by UCI, WADAix, the Swiss anti-doping agencies and at races. That's equal to one test a week."

Who he's trying to fool here - himself or you - well that's for you to decide.

Marginal gains - the answer to everything

Of course, given where the sport is at today, it's not so much a rider's view of cycling's long battle with drugs that interests people, people are more interested in cycling's short battle with electric motors. And Fabian Cancellara is pretty much Ground Zero of the motors debate, which kicked off in May of 2010 with a couple of stories in Italian newspapers L'Avvenire and Il Giornale and quickly came to focus on Cancellara's victories that spring in the Ronde van Vlaanderen and Paris-Roubaix. Which is something he is not very happy about:

"Those accusations hurt me. I think mechanical doping is as deplorable as regular doping. Some people said I should see the allegations as a compliment: I was so strong people thought I was using a motor. Sadly, I couldn't see it that way. Thankfully, the storm died down reasonably quickly, but I still get comments about it.'"

Of bigger concern to Cancellara than cheating is the issue of respect. Consider this comment:

"'With Bjarne [Riis], everyone was important, and values were paramount,' says Cancellara. 'I miss that in the peloton of 2015. I miss that in society too. There's a general lack of values and respect, because of a failing in education.'"

That lack of respect extends all the way to the Tour de France, a race Cancellara grew to dislike:

"The Tour has got bigger and is increasingly stressful and inconvenient for the riders. The older I became, the less I looked forward to it."

At the root of the problem here is ASO, Cancellara offering these comments on the Tour's organiser:

"ASO is too controlling. As a top rider you get to hear a lot about the political scheming behind the scenes between the UCI and ASO or an interest group like Velon. As far as I'm concerned it's clear: you can't negotiate or discuss with the Tour. The Tour is the biggest and wants to stay the biggest, without thinking of the general interests of the sport. The Tour has become a commercial machine that lacks warmth. They want to create a monopoly for themselves and I can't support that."

At the heart of Cancellara's problem with the Tour, though, is not ASO's monopolistic tendencies. It is ASO's failure to afford him the respect he feels is his due: "In all these years I've never been officially invited to the presentation of the Tour route," he tells us ruefully. Should he, you ask? Well he holds the all time record for having worn the most yellow jerseys without ever winning the race, or even making it onto the podium: 29 of the little yellow jumpers, three more than that chippy little runt René Vietto managed. Cancellara's diatribe against the Tour ends with this:

"General classification riders, top sprinters... they're the ones who matter to ASO, and so they're invited. But me, the time trialist who won five prologues, never. Yes, that did disappoint me. It would have shown respect if they'd invited me to the presentation just once."

Brought to you by the same people who've translated a couple of Cannibal Publishing's other recent offerings (Ruben van Gucht's Hinault and Tonny Stroucken and Jan Maes's Merckx 69) Fabian Cancellara is pretty much a book by a fan for fans. It's a hagiography, plain and simple. Often very simple and - oddly, given the rather lavish production values - actually quite plain: the photographs are mostly of a kind, far too many heroic shots of Cancellara celebrating victory or sprawled on the ground in triumph or despair. As for the writing, most of it is little more than functional, Van den Langenbergh pouring out words leadenly and with an excess of added exclamation marks, a style that is not helped much by odd bits of clod-handed translationx that don't seem to have passed the eye of anyone who actually knows cyclingxi.

Almost wholly absent from the book is any attempt to put Cancellara's career in any form of context, except that of the record books. Reading Fabian Cancellara with no knowledge of the subject you'd imagine that Cancellara mostly existed without any rivals, without any of the great rivalries that shape our appreciation of the proper giants of the road. Jacques Anquetil could not have existed without Raymond Poulider. Bernard Hinault needed Laurent Fignon and Greg LeMond. Even Eddy Merckx had Luis Ocaña. But Fabian Cancellara? Here, he's presented as a man alone, a man with no adversaries worth speaking of. Which actually makes him seem somewhat boring, renders his victories somewhat meaningless.

Cheering on the local hero

Where Cancellara is most interesting is not on the actual racing. On that subject, Marco Pastonesi opens the book with a marvellously overwrought description of Cancellara winning Strade Bianche in 2016, paragraph after paragraph of brilliantly over the top purple prose, hagiography of the highest order, and when you compare that with the rather plain paragraph on the race Cancellara himself eventually serves you see why he is the wrong person to talk you through his victories. No, what is most interesting is Cancellara talking about the mental difficulties he suffered during his career, such as in the winter of 2008, after his name was publicly linked with the CERA retests, or in 2012 after a couple of crashes sidelined him for much of the season, or the panic attack he suffered the night before the time trial in Rio in 2016. Sadly, though, this is not an area Van den Langenbergh dwells on in any great detail.

But, then, it's not like Van den Langenbergh dwells on anything here in any great detail, he's in too much of a rush to worship at the altar of his Swiss idol to bother with that. Hero worship, that I can live with, I have no major problem with hero worship when it's done with a degree of style. That, sadly, is the real problem with this authorised biography of Fabian Cancellara - it lacks panache. It's pretty. But it's bland.

A hero to many