A Ride Through the Greatest Cycling Stories, by Giles Belbin and Daniel Seex

Share All sharing options for: A Ride Through the Greatest Cycling Stories, by Giles Belbin and Daniel Seex 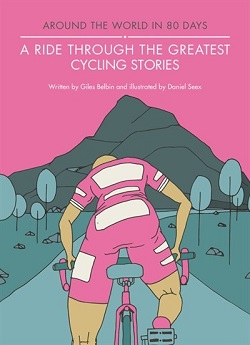 Title: A Ride Through the Greatest Cycling Stories - Around the World in 80 Days
Authors: Giles Belbin (words) and Daniel Seex (illustrations)
Publisher: Aurum Press
Year: 2017
Pages: 175
Order: Quarto
What it is: A cycling miscellany, with 80 stories each linked to days of the year
Strengths: It's an eclectic mix of stories, some told from unexpected angles
Weaknesses: As always with these things you'll quibble over things left out and some of the things included

A cut-down version of A Year in the Saddle - 365 Stories from the World of Cycle Sport, Giles Belbin and Daniel Seex's A Ride Through the Greatest Cycling Stories - Around the World in 80 Days is a cycling miscellany built to be dipped in and out of. Let's do some dipping.

Colombia's latest cycling superstar, Nairo Quintana became only the second Colombian to win a Grand Tour when he won the 2014 Giro d'Italia, following Luis Herrera's 1987 win in the Vuelta. It was Quintana's first ride in Italy's national tour and he dominated the final, crucial week. He took the pink jersey after stage 16, a 86-mile (139km) dance through the Alps that took in the mighty climbs of the Gavia, Stelvio and a final 14-mile (22km) slog up to Val Martello in snow and ice, and he cemented it three days later taking victory in the mountain time trial to Cima Grappa, opening a three-minute advantage overall.

Quintana stood in pink in Milan, showered in golden ticker-tape and holding the giant trophy awarded to the winner of the Giro. He may have been just 24 years old and riding just his third Grand Tour but his win was no surprise, such had been his early promise.

Born into a peasant family in the Boyacá Department of Colombia, Quintana honed his cycling legs over a distance of 10 miles (16km) to school. By 2010 he was in Europe racing at the Tour de l'Avenir. Quintana won two stages and the overall at the race dubbed the Tour of the Future. He was on his way.

In July 2013 he headed to the Tour de France. It was only his second three-week race (he'd finished thirty-sixth at the Vuelta in 2012). He was a sensation. He won a stage, finished second overall, won the King of the Mountains and the white jersey as best young rider. It was the best performance at the Tour by a Colombian, eclipsing Fabio Parra's third place in 1988.

Then came the Giro d'Italia win followed by a further second-placed finish behind Chris Froome at the Tour in 2015. It is surely only the start of what promises to be one of the most exciting cycling careers.

Six-day racing was first held at Madison Square Garden, New York, in 1891. At first riders raced alone, with the only limit to the amount of time they could ride being stamina and their ability to go without sleep.

By 1899 the format of the race had changed. With concern growing for the wellbeing of riders who, only too aware of the financial rewards on offer, were now pushing themselves beyond all reasonable levels of endurance, a rule was introduced by the New York legislature stating that no individual could ride for more than twelve hours a day. The ruling led to teams of two being formed and in 1899 the Garden hosted New York's first two-man six-day race.

Into the 1900s and the event grew in popularity. Soon six-day races were springing up in other American cities. Six-day riders were among the most famous and best-paid athletes in the States. Demand grew so much so that from 1920 New York hosted more than one race a year, attracting the celebrities of the day to the Garden to watch the action. In 1925 it was the first event to he hosted in the rebuilt Garden which had been designed with the requirements of six-day racing in mind.

The last six-day meet in New York prior to the Second World war took place in 1939. Started by baseball star Joe DiMaggio, the race finished on 25 November with Cesare Moretti and Cecil Yates winning. Six-day racing returned to New York in 1948, but not at the Garden. It wouldn't be until 1961 that the event, dubbed by at least one writer the 'Mad Whirl', returned to its spiritual home. At the time it was hoped that it would be the first of many but any such optimism soon faded and the 1961 edition proved to be the last of the New York Sixes.

As with most of these things, there are the occasional factual infelicities. And this really just being an edit of an earlier book some of the content is in need of updating. This, though, being a book to whet your appetite rather than satisfy it, you can maybe live with such things. The stories that catch your attention will send you looking for more detail.

As well as the individual stories A Ride Through the Greatest Cycling Stories offers the reader Daniel Seex's accompanying illustrations which, in their own right, are reason enough to want to pick the book up. They don't overpower the words and, unlike other illustrated books such as P is for Peloton and The Modern MAMIL they don't feel like they're the book's raison d'être, they work in harmony with the text.