A selection of 75 'climbs' in the South-West of England

Share All sharing options for: Cycling Climbs of South-West England, by Simon Warren 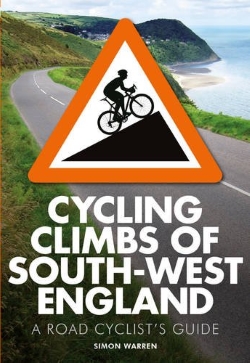 Title: Cycling Climbs of South-West England - A Road Cyclist's Guide
Author: Simon Warren
Publisher: Frances Lincoln
Year: 2017
Pages: 175
Order: Quarto
What it is: 75 'climbs' across the South-West of England (Gloucestershire, Wiltshire, Somerset, Dorset, Devon, and Cornwall)
Strengths: Pocket-sized format with bite-sized profiles
Weaknesses: More about giving directions to the climbs, the reasons to want to ride them are absent

For Cycling Climbs of South-West England Warren picks off the six English counties in the bottom left of the map: Gloucestershire, Wiltshire, Somerset, Dorset, Devon, and Cornwall. His  selection of 75 climbs runs like this:

Each climb is given two pages, one for a photograph which gives some indication of the character of the climb - the road surface - and the other offering a description of the climb along with a basic map and gradient profile. Less a book for curling up and reading, this is something for the tick-list obsessive in your life, even going so far as to provide the user a tick-list at the back of the book where they can cross off the climbs as they do them. What prize you get when you collect the lot I know not.

For me, Warren's little guides are functional books that there's not really a lot to say about other than that they do what they say on the tin (though there is plenty of scope to argue over the selection of climbs, especially when 74 metres of tarmac is being sold as a climb). They're not the sort of books I'd buy but I can imagine how they appeal to others. Me, I'd like to know why I want to scale these climbs. Me, I'd like to be told stories about the region I'm riding through. Me, I'd prefer to see the climbs stitched together into proper rides, joined up climbing, and not left to sit there all on their lonesome, their geographic proximity only discoverable if you go to the bother of marking each of them on a map (unlike other British cycling guidebooks reviewed here, Warren doesn't seem to do GPX files for his readers). I'd also prefer to see a guide book that looked like something I'd get upset about if it turned to papier-mâché in my jersey pocket, something with a bit of artistry to it.

I'd like a book to inspire me. But that's me: I don't do tick-lists. Maybe you do.