Share All sharing options for: The Haywire Heart, by Chris Case, John Mandrola and Lennard Zinn 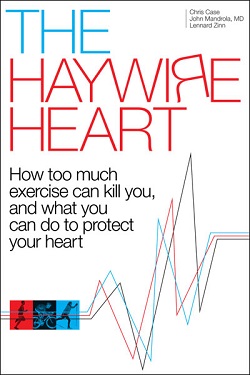 Title: The Haywire Heart - How too much exercise can kill you, and what you can do to protect your heart
Authors: Chris Case, John Mandrola, and Lennard Zinn
Publisher: VeloPress
Year: 2017
Pages: 306
Order: VeloPress
What it is: A self-help book for cycling obsessives riding themselves into an early grave
Strengths: This is an important and much misunderstood topic
Weaknesses: It's hard to avoid the feeling that the authors are simply intent on scaring the bejesus out of you, particularly as you never get to learn the actual incidence of cardiac problems in the general population let alone the sporting one

The athletic development is not natural;
much better the ordinary healthy condition of the body.
~ Hippocrates

The Haywire Heart is a self-help book for people who are, apparently, incapable of helping themselves by listening to their own bodies. How then they can be expected to listen to Chris Case, John Mandrola, and Lennard Zinn I don't know. But that's me: I don't get self-help books.

Given that I don't get self-help books I should explain why I wanted to take a look at The Haywire Heart. Over the last couple of years elite professional cycling has seen a number of riders sidelined either temporarily or permanently with cardiac conditions.

The number of cardiac cases listed above doesn't necessarily suggest that there is a problem that cycling is failing to confront. Cyclists have always had heart problems: look at Franco Bitossi, look at Eddy Merckx. Cyclists, often times they suffer the same problems as everyone else (even though anti-doping rules deny them the same treatments as everyone else, but that's a story for another day). And the numbers above aren't particularly high when you consider the size of the professional peloton (which, at WorldTour level alone, is more than 500 riders). But, given the myth of the EPO deaths, you tend to notice these things, they tend to stick in the mind, and you want some sort of explanation, preferably one that doesn't just say nothing to see here, move along, one that actually explains to you what is actually at play here.

Another reason for wanting to take a look at The Haywire Heart was something that came up when reviewing one of last year's stocking-fillers, in which a Victorian physician, George Herschell, linked cycling to heart disease away back in 1896:

"For whilst the novice, by sheer carelessness may strain his heart - but if under middle age can escape if he will only take the most ordinary precautions - the skilled and trained professional cyclist, on the contrary, who can travel for hours without turning a hair, is almost certain to produce degenerative changes in his heart and arteries."

Herschell went on to use math to prove that the craze of the hour was a crazed mass murderer:

"Of a thousand people over middle age, we may expect to find a hundred whose circulatory apparatus is beginning to show signs of wear. If only fifty out of this thousand take up cycling - and as things go I am sure this is below the average - out of this fifty, five will certainly have affected hearts. And there is no getting away from this fact. It therefore follows that at least five out of every fifty persons over middle age who take up cycling will be almost certain to do themselves grave injury unless they exercise the greatest prudence."

Does more exercise mean greater health? Or is there a point at which too much exercise becomes detrimental?

"The human heart," Case and his co-authors tell us, "is a bit longer and about as wide as an adult fist". Here's a diagram:

Cross-section of the heart

The heart, it comes with a lot of padding:

You could ask here how someone who does zero exercise can be expected to live to 80 but that would be to miss the point - GOSH ALMIGHTY BUT AREN'T THOSE NUMBERS IMPRESSIVELY BIG!

Impressed? You should be. Take a bow, your heart. What a trouper.

All these factoids - and there's more, many, many more - are there to tell you something:

"When the workout is over, the heart keeps producing as much energy every day as a 220-pound boulder would represent in kinetic force after falling from a 38-story building."

Are you thinking Wile E Coyote at this point? Me too.

Let's get physical. Let's talk about Jim Fixx, the man immortalised by Bill Hicks in a routine that copyright makes too expensive to repeat here. Here's a paragraph about him that you really shouldn't compare too closely with what appears on Wikipedia:

"In 1985, exercise physiologist Kenneth Cooper published Running Without Fear: How to Reduce the Risk of Heart Attack and Sudden Death During Aerobic Exercise. In it, he detailed the risk factors that might have contributed to Fixx's death. After reviewing Fixx's medical records and autopsy, and after interviewing Fixx's friends and family, Cooper concluded that Fixx was genetically predisposed. In addition to his father's death from a heart attack, Fixx himself had a congenitally enlarged heart. Of course, his life before taking up running at age 36 was an unhealthy one. Fixx was a heavy smoker, had a stressful occupation, had suffered through two divorces, and had trouble controlling his weight, which had ballooned to 214 pounds."

If that doesn't sound like you, don't worry: there's nine case studies, taking up about a fifth of the book, and hopefully you'll recognise yourself in at least one of them and see how there's all sorts of ways in which your heart could be about to kill you. You could have a myocardial infarction. You could have an arrhythmia. You could have a cardiomyopathy. You could have long QT syndrome or a pulmonary embolism or an aortic tear or even atherosclerosis. If that makes your chest tighten and your heart beat harder DON'T WORRY, we're only about a fifth through The Haywire Heart and the good news is sure to come along soon. Isn't it? In the meantime, here's another helping of fear, uncertainty and doubt. Lap it up:

The evidence can not be ignored: TOO MUCH EXERCISE CAN KILL YOU AND ONLY CASE AND HIS COLLEAGUES CAN TELL YOU HOW TO PROTECT YOUR HEART! But not if you're tall:

"Spanish researchers reported a series of 107 patients (whose average age was 48) who presented to the emergency department with new-onset AF. The research team split the group into three subgroups according to height. Compared to patients with normal height, those in the tallest group were 17 times more likely to have AF.

"And German researchers compared 33 former top-level handball players (whose average age was 57) to age-matched controls. Ten of the 33 athletes had AF. Athletes in the AF group were significantly taller than those in the non-AF group."

Soz Big Bird, no fondos for you.

I said at the outset that this is a serious subject, so why am I not taking it seriously? Because mostly The Haywire Heart feels like a long magazine article stretched beyond its limit. Which is fitting on two levels. First, it is a long magazine article stretched beyond its limit. Secondly, pushing on when really you should rein in is thought to be one of the causes of cardiac conditions in endurance athletes. And to think, they keep saying Americans don't do irony.

Then there's the FUD. The fear, the uncertainty, the doubt: the three horsemen of the modern marketing apocalypse. Two of The Haywire Heart's three co-authors come from VeloNews: Chris Case is the managing editor and Lennard Zinn is a senior writer (the third, John Mandrola, is a doctor). And by God do the people in VeloNews have a hard-on for FUD. I was half-expecting the authors to blame cardiac conditions in endurance athletes on a failure to wear knee-warmers through to March or maybe point out how riding a Trek Emoda instead of Madone Race Shop Limited increases the incidence of cardiac conditions.

While the authors constantly point out that some exercise is better than no exercise, they just don't seem to be able to help themselves when they present their case studies and the epidemiologic evidence, all of which paint a picture in which endurance athletes are killing themselves with exercise, the evidence all being presented without much by the way of context for the numbers offered up, such as what is the actual incidence of heart problems in the general population, and what is it thought to be among endurance athletes. Is the figure Herschell was using away back in 1896 - 10% of the population - a fair reflection of the true problem today, or does it over- or underestimate the issue? While this is clearly a big issue for the individual, how big an issue is it for the world at large?

"Detraining of the exercised rats resulted in rapid reversal of the vagal enhancement and AF vulnerability. Fibrosis and left atrial dilation, however, remained after the rats stopped exercising. (We will talk more about detraining in Chapter 8, which covers treatment options. Meanwhile, you may want to read this key paragraph again.)"

Well gee guys, thanks for prodding me awake, I guess I was drifting off a little there. My bad.

If you have been diagnosed with a cardiac condition - or if you suspect you might either be suffering from an undiagnosed condition or be susceptible to such a condition - a book like The Haywire Heart will fill in a lot of blanks for you, coming as it does with chapters that take you through talking to your doctor about your possible condition and talking you through dealing with a diagnosis and tackling treatment options. If, however, you're the sort of ageing cycling obsessive who's deaf when their body is telling them to slow down and take it easy, are you really going to bother with something like The Haywire Heart or are you more likely to be curling up at night with a copy of Case et al's VeloPress stablemate Joe Friel's Fast After 50? I know which one my money's on.