The story of the world's most beautiful bike race?

Share All sharing options for: Giro d'Italia, by Colin O'Brien 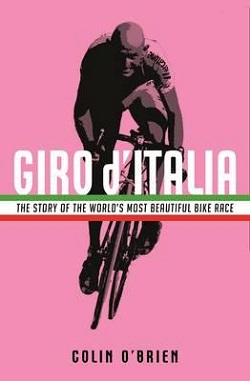 Title: Giro d'Italia - The Story of the World's Most Beautiful Bike Race
Author: Colin O'Brien
Publisher: Pursuit Books
Pages: 231
Year: 2017
Order: Profile Books
What it is: A history of the Giro d'Italia, which celebrates its one hundredth edition this year
Strengths: O'Brien has interviewed Andy Hampsten, Stephen Roche and Mauro Vegni
Weaknesses: It's all rather familiar from previous books that tell the same story

You take delight not in a city's seven or seventy wonders,
but in the answer it gives to a question of yours.
~ Italo Calvino
Invisible Cities

Duels and dualities. There's a title for a Giro d'Italia book for you, gratis. All you have to do is bend reality to fit the frame. Focus on the duels, the great rivalries: Girardengo and Binda, Coppi and Bartali, Moser and Saronni. Paint a picture in which one protagonist represents one aspect of Italy and the other its opposite: city versus country, religious versus secular, the past versus the future. Bish, bash, bosh, stick a piccie of Marco Pantani on the cover and you've got yourself a tour de force.

On one level, duels and dualities is partly the story told by Colin O'Brien in this new history of the Giro d'Italia. Six years after the arrival of Bill and Carol McGanns's The Story of the Giro d'Italia, six years after the arrival of Herbie Sykes's Maglia Rosa, six years after the arrival of John Foot's Pedalare! Pedalare! this Spring sees the arrival of a second trio of Giro titles, with O'Brien's book leading out Brendan Gallagher's Corsa Rosa and a fresh offering from Herbie Sykes, The Giro 100. If you don't already think you know far too much about the race that prizes beauty and unpredictability over all else then you'll feel like going on Mastermind by the time Nairo Quintana is crowned champion of the one hundredth Giro in Milan on May 28th and the sprint stages have given you time enough to get through these new takes on the race's history.

"Pietro Linari, a teammate of Brunero and Binda, took the honours on 1925's first stage, after 278 kilometres of racing from Milan to Turin, but all of the major favourites finished right behind him. Stage two headed towards the coast in Liguria, finishing in Arenzano, 30 kilometres west of Genoa along the Costa Azzura. The win went to Girardengo, but both Brunero and Binda, his young gregario (the Italian term for a support rider within a team), finished on the same time, with the Trombettiere ahead of his leader in the classification. The 315 kilometres to Pisa on stage three cost Brunero more than four minutes, but they couldn't separate Girardengo and his young rival, Binda, who both finished on the same time as the day's winner, Girardengo's teammate Pierino Bestetti. The following stage was almost 14 hours long, but still they were neck and neck, and after more than 1,2000 kilometres and 45 hours of racing, the duo began stage five to Naples joint top of the general classification.

"As the race headed south, the plot thickened. Rumour had it that Gaetano Belloni was a little upset with his friend Girardengo. The Campionissimo had worked hard to help earn Bestetti the win with little regard to Belloni's travails. He'd lost 16 minutes that day to bad form or bad fortune, and at least part of the blame, as far as Belloni was concerned, lay with his colleagues from Wolsit. For a rider of his stature - he'd already won the Giro in 1920, Milano-Sanremo twice and two of an eventual three titles at the Giro di Lombardia - this was a slight that couldn't be ignored. And so, when the opportunity presented itself, Belloni took his revenge, working with Binda to attack Girardengo when he flatted on the way from Rome to Naples. Belloni's treachery was rewarded with the stage win, but it was his 22-year-old accomplice who profited most, finishing the day with a lead of five-and-a-half minutes over Girardengo, whose hopes of a third Giro title had been dealt a deadly blow.

"The gap would not have seemed fatal at the time - Enrici had won by almost an hour the year before - but for the rest of the Giro, the crowd favourite Girardengo just couldn't shake Binda from his wheel. He bounced back from his disaster in Naples with a win two stages later in Benevento, but the race leader rolled in just 28 seconds behind. Brunero won stage eight to Sulmona, but Girardengo and Binda were just behind him, the hitherto king of Italian roads stalked mercilessly by his fresh-faced heir apparent. The next three stage victories went to the Campionissimo, but Binda never failed to finish immediately after, refusing to cede so much as a second, and by the time the peloton rolled out of Verona on stage 12, bound for Milan, there must have been an air of deflated resignation to the Wolsit team, even as Belloni took the final stage win. Their superstar, nine times the Italian national champion, twice the Giro d'Italia winner and the dominant force at races the length and breadth of the peninsula for more than half a decade, had been bested by a kid. Little did they know that the kid was just getting started."

Such stories need to serve a purpose, to answer a question: we've been here before, we know these tales, we're looking for something new, something fresh. O'Brien, his tales are meant to serve a narrative purpose: "from the outset I had an overarching narrative in mind. The deeper I went with my research, the more tempting it became to deviate from that idea and mention every single detail of the race's 108-year history, but it was never my intention to write an encyclopaedia of the Giro d'Italia, because I would never want to read one. I wanted to tell the story of what I think is the world's most exciting sporting event."

What makes the Giro special, the world's most exciting sporting event? Partly, for O'Brien, it's purely personal - it's the race that heralds Summer: "The weather in May is still capricious, and the mountains still covered in snow, but once you see the pink of the Maglia Rosa you know that long, sun-drenched days are not far off." But there is also the character of the race itself, the story captured by the tales told of duels ancient and modern: "With its idiosyncratic character, complex history and huge cast of characters, the Giro can sometimes seem to elude full comprehension, but it means a great deal to an awful lot of people. This book sets out to explore why that is."

The first half of Giro d'Italia covers the story of the race from its birth in 1909 through to the second half of the 1970s, just before the arrival on the stage of Italian cycling's last great rivalry, Francesco Moser and Giuseppe Saronni. If you've read John Foot's Pedalare! Pedalare! O'Brien's take on this part of the story will be familiar to you, right down to the inclusion of digressions about Enrico Toti (who definitely had only one leg, who may or may not have cycled around the world, and who never rode the Giro) and Carlo Levi (the author of Christ Stopped at Eboli).

The second half is mostly taken up with three interviews: the ubiquitous Andy Hampsten and Stephen Roche telling tales they've each had three decades of repeating to sand the rough edges off, along with Mauro Vegni, only the sixth man to helm the corsa rosa (after Michele Acquarone, Angelo Zomegnan, Carmine Castellano, Vinzenzo Torriani and Armando Cougnet). In addition there are the stories of Moser and Saronni and of Marco Pantani, and a single chapter which acts as the piece of carpet under which O'Brien sweeps the long history of doping at the Giro (O'Brien's take on doping is remarkably quaint for someone who came to the race in the 1990s, right down to him adding gilt to the myth that Gastonne Nencini blood doped).

Structured along the same lines as Geoffrey Wheatcroft's popular little Tour de France history - chapters about the race interspersed with digressions, O'Brien choosing to use short chapters about some of the Giro's more interesting mountains as a means of giving breathing space to the main narrative - Giro d'Italia is a small book trying to paint the big picture. Sadly it too often gets bogged down in detail and somewhere along the way all that passion-sucking detail seems to have crowded out anything that tells you why the Giro is special.

You do, I think, get to see some of the race's idiosyncrasies, such as in the Binda story relayed above, how the race was effectively won for Binda by Belloni's rebellion, but - the race here existing pretty much in a hermetically sealed bubble - you don't get to see why the Giro should be considered as standing apart from the Tour and not perpetually stuck in its older and more famous sibling's shadow. Somewhat annoyingly, the Giro here isn't even allowed its own language, with parcours used when percorso would have been more appropriate, or directeur sportif when - this, after all, being the story of an Italian race - direttore sportivo would make more sense: such use of the French lexicon may seem small beer but it subtly undermines claims that the Giro is special. It has its own language, it does not need its rival's.

The failure to make the race live up to its billing, the failure to show what the Giro means to people, that is something the book's editors should have picked up on but modern editing seems to be solely about commissioning titles and seeing they're delivered on time. Actually reading them, even for copy-editing purposes, that's been left to you, and too often that shows ("Cyrille Guimard, now in charge of Fignon, was outraged too, claiming that fans had pushed Moser up the climb and had been allowed to draft team cars without permission." Why Guimard was outraged at fans drafting the team cars is allowed to go unexplained.). Like with too many recent cycling books I do feel that the author has been sorely let down in this regard, wish that O'Brien had had an editor who was willing to say no, this doesn't tell the story you said you wanted to tell, try harder.