Joining the Dots, by Lee Craigie

An account of the 2016 edition of the Highland Trail 550 race - 885 kilometres of (mostly) off-road through the Scottish Highlands.

Share All sharing options for: Joining the Dots, by Lee Craigie 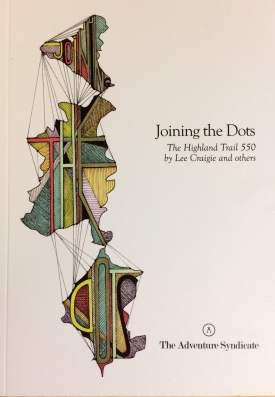 Title: Joining the Dots - the Highland Trail 550
Author: Lee Craigie, with photographs by James Robertson
Publisher: The Adventure Syndicate
Year: 2017
Pages: 118
Order: 18 Bikes
What it is: An account of the 2016 Highland Trail 550 race - 885 kilometres of (mostly) off-road through the Scottish Highlands
Strengths: There's a back-to-basics feel to races like the HT 550 that can serve to inspire in ways that normal races can't
Weaknesses: It helps if you've dot-watched an event like the HT 550

I once did an Audax twelve hundred kilometre ride around Ireland. I mentioned it here recently in connection with something else, how coming up to closing time on the third night, with the end a few hours north and familiar roads ahead, I had the défaillance that, for me, defines the word défaillance, the spirit and flesh equally unwilling. Anytime I think about that ride that's what I remember first. But alongside that memory sits an image from the end of the first day, the sun setting into the Atlantic behind Ben Bulben, and an image from a few hours before that black curtain fell on the final night, the moon rising over Waterford. I don't remember much from the final few hours as we rode back into Dublin, I remember very little of any of the riding actually. Just a sunset and a moonrise, and a heavy curtain of blackness. Twelve hundred kilometres and I can barely fill a paragraph with it.

The Inverness-based Lee Craigie's memories of the Highland Trail 550 - an 885 kilometre (mostly) off-road self-supported individual time trial through the heart of the Scottish Highlands that takes more than four days to complete - run a little bit longer than a paragraph. They do, though, include sunset memories of the sort I can appreciate:

"I knocked back the pace further and inched up the steep col at the same rate as the sun sank in the sky, entertaining the curious fantasy that I was its counterweight."

Mountain biking, as you all know, was invented in Marin County in the mid-eighties but is really much older than that. Actually, it's much, much older. Now, as the industry tries to find news ways to sell us these old ideas, we've got fat-biking and bike-packing as the fads du jour. And we've got new events to pique our interest, events that are somewhere between sportives and races. Events which look and feel remarkably like the original versions of races like Bordeaux-Paris and Paris-Brest-Paris. Events that are actually far from new, are already quite old. One such event is the Highland Trail 550 which, in the same way that Paris-Roubaix was born as a training race for Bordeaux-Paris, was originally conceived of as training for an American event, the Colorado Trail Race. In 2013 the HT 550 became an event in its own right and since then has grown both in severity and popularity.

Starting and finishing in the village of Tyndrum in the south of the Scottish Highlands, the HT 550 heads north, up through Fort Augustus and Oykel Bridge, turning onto its backward course around Bealach Horn (which, Graham Robb's Cols and Passes of the British Isles tells me, is up beyond Achfary, in a mountain range that gave its name to a famous racehorse: Foinaven). The course then heads back south, on different tracks to the ones that took the riders north but again through Oykel Bridge and Fort Augustus.

You could probably write a book just about the route: even listing the place names à la the KLF could cause a reverie (the Bridge of Balgie, Lochs Rannoch, Ericht and Pattack, General Wade's Old Military Road, Struy, Croick Church, Glen Golly, Kylesku, Ullapool, Abhainn Loch an Nid, the Postman's Path, Easan Dorcha, Glens Licht and Affric, the Devil's Staircase). All of this, sadly, is missing from Joining the Dots, Lee Craigie's account of the 2016 edition of the HT 550. The story here is more grounded in the moment than the place, race reporting, daily diaries of Craigie's journey, interspersed with comments from other HT 550 participants. Much of it reads like most race reports read: a lot of words that tell you how hard and how life changing the journey was (not just for Craigie) but very few that really show that. Having started life on Crowdfunder this is probably understandable: there's a particular audience in mind here, people already familiar with the HT 550 and its participants.

A misty morning on Bealach Horn

This is not to suggest that Joining the Dots is just a race report. The HT 550 is not, after all, just a race:

"I turned into the mass of mountains on a surprisingly ridable trail and rode upwards into the sky.

"There are only a handful of times on this route when it is necessary to shoulder your bike and over Clach na Frithealaidh is one of them. It was almost a relief to take pressure off my bum and hands and place it on my feet and shoulders for a while, and I found my walking legs felt strong and rested. I topped out onto the barren, windswept plateau at 10.30pm. The evening was quiet and calm and golden light was falling in crepuscular rays under the remaining clouds. I paused to breathe and listen to nothing, then caught motion out of the corner of my eye.

"I turned, and not more that ten metres away stood four young deer. They stared at me with enormous doleful eyes and sniffed the air. I spoke to them softly (something about how I must smell pretty bad if I recall), and they waggled their ears as if in amused reply. We stood smiling at each other and then the strangest thing happened. The deer with the slightly moulting coat stepped through the tiny herd and walked towards me. I can only assume they were curious about this calm, feral creature accompanied by her weird contraption, that had happened upon them just before bedtime. I must have exuded the opposite of a threat. Maybe the grand master stag back in Corriehallie, who had drawn me up the hill on day two, had been in touch with them and they were keeping an eye out for me.

"I don't know, but for me, standing there in the grand natural amphitheatre on top of the world, it felt like the most obvious and natural thing to spend a moment communing with these wild creatures."

Also missing from Joining the Dots are stories of the people who rode. There's stories from the people who rode, but not about them. The funny thing about this is that, while I personally think it ought be a weakness in a book - these are characters, with backstories that need to be fleshed out - like a lot of you I know that this is quite true to these sort of rides: you can ride beside someone for hour after hour, you can help one and other, you can meet up time and again on different rides, and you can do it all without knowing anything about them apart from the important stuff - how hard they can ride and whether they'll wait for you when you puncture. This from RJ Sauer, another of the HT 550's participants, neatly sums it up:

"I am mortified. We have shared the trail together for a day. An eternity. A bike-packing first date. We've slept together. Perhaps not literally. But sharing a ditch with someone has its own metaphoric intimacy. The self-supported racer's one night stand. I try to wake my fellow racer mummified in silence. I feel a fierce loyalty to the people I camp with. Perhaps a race weakness. Allies. Comrades. Fast friends. Shit ... What's his name?"

Census data from 2001 and 2011 shows that just 2.8% of people in England and Wales cycle to work, a decade of change having no noticeable impact on the official figures. Sport England's Active People Survey shows that cycling in England has been stuck at pretty much the same levels over the last decade, between four and five percent, while the Department for Transport's National Travel Survey shows a slow, generally downward trend for cycling over the last two decades. The evidence for a cycling boom in the UK is, it would seem, everywhere except in the statistics.

Of perhaps bigger importance when you consider how the UK's current cycling boom has been sold, according to a recent YouGov poll, only 1.9% of people offer the Olympics as inspiring them to take up cyclingi, this despite British Cycling bringing home the bangles and the baubles by the armload every four years since Beijing. The inspirational stories of people like Laura and Jason Kenny, of Chris Froome, of Bradley Wiggins, they are, it would seem, not nearly as inspirational as we're supposed to believe. Yes, those who ride are being inspired (by multiple factors) to ride more more and yes those who ride are being inspired to spend more. But all of that is just preaching to the converted, while the evangelists fail to bring in new followers.

And this is where Lee Craigie comes in. Along with Emily Chappell she founded the Adventure Syndicate, a group of female cyclists who are going off and taking on challenges like the HT 550 and then coming home and talking about them - to other women, first and foremost, but to men too - not just through books and blog posts but also through school visits, all in the hope of trying to encourage others to take up cycling.

The traditional athlete model, Emily Chappell told me, is too elitist and expensive to be truly motivating or accessible. So the Adventure Syndicate offer a different model. They're not trying to tell you you can be the best in the world. Like Christophe Bassons, they're telling you you can be the best you can be. And that's a message that can be more inspiring than any amount of bangles and baubles. Particularly when it's being delivered by role models you can believe in, people who aren't RoboCop or Lara Croft on wheels.

A long time ago, back in the days of the nouvelle Éire, I took up cycling not out of some desire to emulate the exploits of Sean Kelly and Stephen Roche and Martin Earley and Paul Kimmage but because I'd read an article about the Wicklow 200 - a 200 kilometre Audax-like sportive through the Wicklow mountains - and thought I'd like to try that, to measure myself against that. Within a couple or three years of having achieved that goal I was doing that twelve hundred whose story I opened with. We've all come to this sport in different ways. If we want to bring more people along with us we should be trying different ways to attract them. Maybe giving a friend a copy of Joining the Dots will have more impact on them than a copy of the latest celebrity chamoir. At the worst you're going to read it yourself and maybe be inspired to see how you measure up against something like the HT 550.