Cycling infrastructure to make you laugh. Or cry. 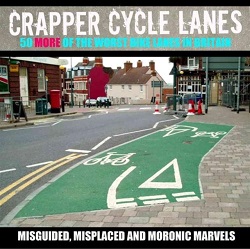 Title: Crapper Cycle Lanes - 50 More of the Worst Bikes Lanes in Britain
Author: David Whelan
Publisher: Eye Books
Year: 2016
Pages: 128
Order: Eye Books
What it is: Examples of poor - downright crap - cycling infrastructure
Strengths: Brevity is the soul of wit
Weaknesses: Some people may not get the joke, but that's humour for you

Crapper Cycle Lanes began in the early years of the new century on the website of the Warrington Cycle Campaign where a Cycle Facility of the Month page (a Page Three for infrastructure nerds, if you will) highlighted elements of cycling infrastructure in the Cheshire town such as this little beauty:

Cycle Facility of the Month

That led, in 2007, to the people in the Warrington Cycle Campaign giving the world Crap Cycle Lanes - 50 of the Worst Bike Lanes in Britain, there then being a vogue for such books after the success of Sam Jordison's Crap Towns series. The shit book boom (see Alan McArthur's Is It Just Me Or Is Everything Shit and Is It Just Me Or Is Everything Shit - Volume Two) burst shortly thereafter, the global economic crisis (which really should be called something like the Great Duvet Days, something to rival the Great Depression) came along. With austerity making everything really shit the crap joke kind of stopped being funny. Today, with Trumponomics on one side of the Atlantic and the Brexit Bounce on the other the black dog of austerity has been kennelled and we're once again partying like it's 1928. Meaning it's once again permissible to laugh at the crapness of the world. Meaning it's time for Crapper Cycle Lanes - 50 More of the Worst Bike Lanes in Britain.

Crapper Cycle Lanes is, unashamedly, a little bit of stocking filler fodder, one of those smallest room books to be bought for birthdays or Christmas (or even Easter, now that it's become Christmas II: Put The Chocolate Bunny Back in the Box) or Father's Day or Mother's Day (though I really don't think you'd get away with giving it to someone on Valentine's Day - stick to Ten Poems About Bicycles, it's less likely to cause your Zéfal to be used to inflate your colon) or whatever the festive occasion of your choosing is (but not, as I said, Valentine's Day - that idea would be really crap).

That said, Crapper Cycle Lanes does have a serious purpose. Here's Warrington Cycle Campaign's Rod King in his introduction to the book:

"In our 2007 publication we called for the implementation of 20mph speed limits as the default for urban roads. In November 2007 20's Plenty for Us was set up to assist community campaigners who wanted 20mph limits and now over 320 local campaign groups have been formed around the UK as of September 2016. In fact this has been widely adopted by local authorities with most of the UK's iconic cities now setting 20mph limits for most roads. Now 16m people live in such places and our call is for this to become the national default. Wide-area 20mph limits have become best practice for making our streets better places to walk and cycle. See much more at http://www.20splenty.org/."

Most surveys of attitudes to cycling show that people are being put off cycling by the perception that other road users - motorised traffic - make it dangerous. Rachel Aldred's Near Miss Project does show that many of those fears are well founded. Setting sensible speed limits is just one thing that can be done to change that for the good. Here in Dublin we have a city-centre speed limit of 30 kph which is now being extended to parts of the inner city. Naturally enough, one of the loudest voices speaking out against the introduction - the imposition, to use the preferred noun - of such limits is that of the Automobile Association.

To which comment you're probably shaking your head and going "Bloody typical!" But turn the clock back a few decades and you'll find it was cyclists who were the ones objecting to attempts to improve road safety, then by the introduction of cycle lanes. Here's the British cycling journalist Frank Urry, in 1938:

"I cannot subscribe to the recommendation of extending the building of cycle tracks, or the compulsory use of them by cyclists if and when laid down. The danger of right-hand crossings discounts any presupposed safety obtained by partial traffic segregation; and it has been admitted that where cycle tracks are in being, motoring speeds on the carriageway will increase, to the consequent danger of the cyclists when the cycle track ceases, as it must do on over 95 percent of our highways. Cycle tracks are a palliative at best, and in my opinion a dangerous one."

That quote is taken from an article by Jeremy Parker, 'Getting Rid of Cyclists', which offers some interesting titbits on the history of cycle lanes in the UK. Here he is quoting the town planner Colin Buchanan in 1958:

"The meagre efforts made to separate cyclists from motor traffic have failed, tracks are inadequate, the problem of treating them at junctions and intersections is completely unsolved, and the attitude of the cyclists themselves to these admittedly unsatisfactory tracks has not been as helpful as it might have been."

It is easy to flick through Crapper Cycle Lanes and see that, even today, junctions and intersections are still problematic:

Today, of course, the wheel has turned: cycling bodies support the introduction of cycle lanes while it is motorists objecting to them. Some object less intelligently than others, it has to be said. In December 2015 the UK's former Chancellor of the Exchequer Nigel Lawson tried to argue that the building of London's cycleways was "doing more damage to London than almost anything since the Blitz." And writing on the Inside the Games website this week former Observer editor Alan Hubbard rolled out this lovely little canard:

"Britain's pedal power led to a boom in cycle sales and, with a little help from bike fiend and ex-London Mayor Boris Johnson, there is now a plethora of cyclists on our roads studiously ignoring the copious cycle-only lanes that have been lavishly and expensively provided for them."

Maybe Hubbard should be sent a copy of Crapper Cycle Lanes, so that he can see why some get ignored. Would you choose to ride on this?

An important point to note here is that - certainly in the UK and here in Ireland - cycle lanes are not compulsory. Here's the UK's Highway Code on the subject:

Cycle Routes and Other Facilities. Use cycle routes, advanced stop lines, cycle boxes and toucan crossings unless at the time it is unsafe to do so. Use of these facilities is not compulsory and will depend on your experience and skills, but they can make your journey safer."

Still, as Crapper Cycle Lanes proves, at least we're able to laugh at the insanity of it all.