Another history of the Giro d'Italia.

Share All sharing options for: Corsa Rosa, by Brendan Gallagher 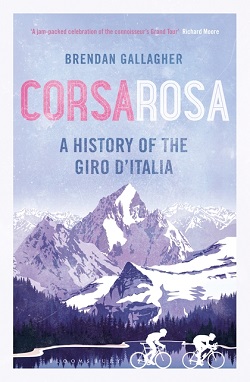 The city is redundant:
it repeats itself so that something will stick in the mind.
~ Italo Calvino
Invisible Cities

"The 1923 Giro was notable for one other performance that occasionally gets overlooked and even slightly derided, namely a fifth place in GC in his only Giro appearance by a wild and haunted looking isolato named Ottavio Bottecchia. As an unknown debutant going up against the big names and their organised teams that was an exceptional result. It's just that when you place his solitary Giro ride against what he subsequently achieved at the Tour de France it rather pales into insignificance. This was however, the first real glimpse of an astounding and unusual talent that was to burn brightly for a couple of years across the border."

As for Bottecchia's Giro performance being occasionally overlooked or derided, I have no idea where Gallagher is getting this. I know it's not in anything I've read, where that Giro performance is almost always credited as the reason Henri Pélissier had his Automoto team immediately sign the Italian and why Automoto then threw Bottecchia into the 1923 Tour de France as domestique for the French vedette. As for his Giro finish being the first real glimpse of his talent - Bottecchia had finished ninth in an eleven-man bunch sprint at Milan-Sanremo earlier in the season and it was that performance which first drew the attention of Pélissier. Bottecchia may have been making his début at the Giro in 1923, but he was far from unknown.

Another example of how colourful and inventive Gallagher is: Alfredo Binda and his nickname, la gioconda. That, Gallagher tells us, means Mona Lisa. Seriously. I thought it meant jocund. And that it was applied to Binda because he was a happy little bugger. Gallagher, though, he just makes up a load of guff about Binda being like Leonardo's little painting, right down to the "unnerving quality he shares with Leonardo's masterpiece. He is observing you just as the Mona Lisa seems to do." Well at least he didn't say it was the eyebrows.

Sticking with Binda, try Gallagher telling us that, in 1923, the Italian "went steaming past" Costante Girardengo and Giovanni Belloni "high on the slopes of Mont Chauve (better known as Mont Ventoux) at the conclusion of the Nice-Mont Chauve race." Mont Ventoux is about 250 kilometres away from Nice. And while Mont Chauve - the Bald Mountain - is one of the Ventoux's nicknames it is also the actual name of a small hill (703 metres - aways shy of the Ventoux's 1,912 metres) to the north of Nice. A small hill to the north of Nice that for a couple of years in the 1920s was the stage for a hill climb, La Course du Mont-Chauve, organised by L'Éclaireur de Nice. A hill climb which Binda won in March of 1923 with a time of 44 minutes and 49.2 seconds. Do you still believe that Binda was riding high on the slopes of the Ventoux?

Something that's not clear from that report is whether Binda really did steam past Girardengo, as Gallagher so colourfully painted it: hill climbs are usually run off as time trials, not mass starts, and the stars usually go last while the neophytes and no-hopers go first. In which case the notion of the neophyte Binda 'steaming' past the campionissimo doesn't really pass the smell test, does it? Do you think Gallagher actually checked whether it really happened?

Should Gallagher be faulted for simply repeating a little bit of bullshit he read somewhere else and adding a bit of colour to it instead of trying to verify the story? That depends on how tolerant a reader you are. To test your tolerance, consider this bit of repetition, involving Learco Guerra:

"Indeed, he [Guerra] won the World Championship later that year [1931] in fantastic style in Copenhagen, routing the field in an extraordinarily long time trial with which the organisers decided to experiment."

I don't know Gallagher's source for the claim that the 1931 Worlds was extraordinarily long and an experiment but I do know where I first came across it: John Foot's Pedalare! Pedalare! (And I know where I've seen it repeated since: Colin O'Brien's Giro d'Italia.) But, as with the Mont Chauve story, if you go and check you'll find that the 1931 Worlds was in or about the normal length and that it was the third time the race had been run as a time trial.

Want more? Here's a whole batch of inventive claims for you, all of which appear before we've even reached the point where Gino Bartali and Fausto Coppi arrive on the scene:

"In its first year Gazzetta had merged with the specialist cycling paper Il Ciclista e La Tripletta and had been quick to embrace the relatively new sport of cycling."

"The Giro also introduced regular mid-race checkpoints - normally at some remote spot - where riders had to sign in and produce their photo identification, again to ensure they were completing the full course."

"There were also, initially, plans to introduce a cut-off system after each stage [of the 1914 Giro] to eliminate the laggards and the calculation was that the back markers should not be more than one hour per 100km behind the stage winner's time but, as we shall see, that hurriedly had to be abandoned."

"The ever-gallant Petit-Breton was back again in the Atala team with fellow Frenchman Paul Duboc, another tough character who had seemed set to win the 1911 Tour de France before abandoning with what some claimed was poisoning."

"At the 1913 Tour de France the cycling world - and the L'Equipe readership - had lapped up the story of the second placed Eugène Christophe on the Tourmalet climb and his epic ten-kilometres walk to find a blacksmith, where he was required to mend his broken forks before continuing: the stuff of legend and still spoken of a century later."

Bike races had had mid-race control points (which also served as feeding stations and were usually in a town) since the year dot, what's not clear is when they stopped being commonplace.

Paul Duboc did not abandon the 1911 Tour de France, he finished it in second place overall.

Eugène Christophe's legendary hike down the Tourmalet passed with little notice in 1913 - Christophe was simply commended for carrying-on, helping to ensure that his Peugeot team finished the Tour with a full complement of riders - and his 'epic' misfortune only became a story in 1919 and after, when Christophe suffered a mechanical mishap that effectively denied him victory in the Tour. And L'Équipe's readership lapping it up? That would be quite the challenge, given the newspaper wasn't born until 1946.

Do such errors matter, isn't it all just a little bit pedantic to be pointing them out? You would think that they do matter, that it isn't just pedantry, that - especially at a time when everyone's getting their knickers in a twist over the right's use of fake news - a publisher as venerable as Bloomsbury wouldn't be putting out yet another cycling book (following last year's Festina disaster from Alasdair Fotheringham) that was riddled with errors. But the reality is that such errors do not matter. Bookshops will still stock the book and people will still buy it: if Harper can keep Chris Sidwells's atrocious A Race for Madmen in print this long then Corsa Rosa is unlikely to he hampered by its inaccuracies. Truth does not matter, it's how you tell it that counts.

So how does Gallagher tell it? A charity shop Matthew Syed (himself a Poundland Malcolm Gladwell, the bubble-permed populariser of the ten thousand hours myth and assorted other bolloxology) Gallagher may be short on real facts but he's long on analysis. Here he is on the 1987 corsa rosa:

"Roche's fortunes nosedived on stage 13 when he suffered a very bad day at the office in the Rimini-San Marino TT. Visentini, always good and sometimes exceptional in time trials, was rightly favourite for the stage and duly won in impressive style but Roche was very poor by his own standards, finishing 2.47 back in 12th position. The reigning world champion now led by 2.47. Roche has always insisted that his poor ride was down to Visentini distracting him on the day of the TT accompanying him on his practice ride, constantly quizzing him over which gear to use where and when on the course, and pestering him with more questions as he tried to get his head together over a light lunch. That might be true but a top rider is totally responsible for his own routines and preparation. Blaming his poor TT ride on Visentini doesn't really wash as a valid explanation."

We're ignoring alternative facts, so just get over the idea of Moreno Argentin - the man wearing the rainbow jersey during the 1987 corsa rosa - having somehow taken the race lead, which was actually held by Roberto Visentini, 2'42" ahead of his Carrera team-mate and now dethroned race leader, Stephen Roche. All that matters here is Gallagher's analysis, his apparent dismissal of the role mind games play in sport, his dismissal of Visentini's brutal and rather brilliant ability to ruin Roche's time trial preparation and put his rival off his game. If, for Gallagher, mind games don't matter, are not a valid explanation, then what is a valid explanation? Gallagher doesn't really say, apart from blaming the rider, a favoured position of his (particularly during the recent brouhaha in the British media over the bullying and sexism many riders have said occurred within the confines of Manchester's medal factory, and on the road).

For the most part, then, all you're really getting from Corsa Rosa - beside a headache - is a rehash of Bill and Carol McGann's two volume Story of the Giro d'Italia mixed with bits of John Foot's Pedalare! Pedalare! and Herbie Sykes's Maglia Rosa. If you haven't already read any of those three Giro books then the only reason for choosing Corsa Rosa over them now is going to have to be price: it's a cheap history, for people who know nothing.