A potted history of cycling, from the hobby-horse to hipsters

Share All sharing options for: Re:Cyclists, by Michael Hutchinson 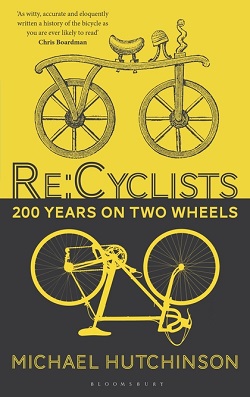 The history of the first century of cycling - from Karl von Drais's hobby horse up to the creation of the Tour de France - is a rip roaring tale of claim and counter claim, invention and theft, boom and bust. Everything about it is known and yet just about everything about it is disputed. Did James Moore really win the first bike race? We don't know. We can't even be sure what the first bike race really was. Did Kirkpatrick McMillan invent the bicycle or was it Pierre Lallement or Alexandre Lefebvre or Pierre and Ernest Michaux? We don't know. We do know that John Boyd Dunlop invented the pneumatic tyre, except we also know that Robert William Thomson had already taken out a patent on the same thing. We know that cycling liberated women but we also know that many of the gains made in the closing years of the nineteenth century were reversed in the early years of the twentieth and that it took the Great War to really bring about emancipation. Some even dispute the role played by Tambora and Von Drais and say that's a recent invention by tree-huggers too eager to link cycling and climate change, an attempt to burnish cycling's green credentials.

All of that makes the first half of Michael Hutchinson's Re:Cyclists - 200 Years on Two Wheels something you'll whizz through, the author racing through the claims and counterclaims of the different eras - the hobby-horse, the ordinary and the safety, from feet to cranks to chain - as he moves from one lousy summer to a brilliant one. And that's one of the curiosities of that first century, one of the curiosities of the first half of Re:Cyclists: it's bracketed by two unusual summers.

The story begins with the summer of 1816, when, as Byron, had it, "The bright sun was extinguish'd". The year before Mount Tambora in modern-day Indonesia (then still the French-ruled Dutch East Indies) had erupted in spectacular fashion:

"As if the event hadn't been hard enough to miss already, it changed the weather. Ash and sulfur dioxide thrown into the atmosphere caused a dramatic fall in global temperatures, leaving 1816 as the 'year without a summer'. Harvests failed. There were food riots across Europe. Red snow fell in Italy. Brown snow fell in Hungary. A disastrous crop failure in Ireland precipitated a typhus outbreak that killed an estimated 100,000 people. There were floods, avalanches, famine, and civil unrest."

Legend has it that the after-effects of that summer led Karl von Drais to invent the bicycle which, over the course of the nineteenth century - after a few false starts - became extremely popular. And then the bicycle stopped being extremely popular. The reason for that collapse in popularity - well, one of the reasons for that - was another unusual summer:

"The summer of 1896 was unusually hot. Suddenly riding a bike became just a trifle hotter and sweatier, and a little less appealing than, say, just sitting about being rich."

Within a couple of months the air had gone out of the cycling bubble:

"Just as cycling reached a high-water mark, the craze collapsed as quickly as it had appeared. In London in 1896, after a lot of sustained campaigning, the previously off limits Hyde Park was opened to cyclists, and took over from Battersea as the mecca. Initially it was a huge success - by June that year the number of cyclists riding there on a sunny morning reached several thousand. But by August, they'd almost all gone. The ladies with floral bikes, and the men in top hats, abandoned their bicycles in droves. By the following season it was clear that fashionable London had moved on. It was over."

In the same way the weather today can mess up the finances at Halfords that summer dealt a body blow to an industry already struggling to cope with over-production. Cheap machines flooded the market and what was fashionably expensive became inexpensively unfashionable.

Hutchinson's telling of the story in between those two summers is brisk and engaging. This isn't just dry facts, names and dates one after the other, it's one of those 'personal' histories where the author imposes himself into the story, sort of like Lucy Worsley doing the Tudors, only with less lipstick and more slapstick:

"For the novice penny-farthing rider, the interacting between pedalling and steering can set up a negative feedback loop. So as soon as I started to put any force into the pedals, I started to weave a sine curve down the path. This grew inexorably in amplitude until everyone in sight was holding their children close because it was becoming clear that I could be coming for absolutely any of them with my enormous, out of control, child-shredding wheel."

While elements of early racing come into the story it is the social history of cycling in those years in Victorian England that most interests Hutchinson, the story of toffs of wheels:

"The Victorian craze was unremittingly posh. Quite where and how it started seems lost to time. Certainly the story of Queen Victoria and her Royal Salvo tricycles would have given cycling the sort of seal of approval that high society cared about. Edward Elgar rode a bike - a magazine caption of the period described him as 'the noted cyclist and composer', which might not be the order in which posterity remembers him, but caught the mood of the time. George Bernard Shaw rode a bike. Arthur Conan Doyle rode a bike. The Prince of Wales rode a bike. It was said that by the mid-1890s every member of the House of Lords was a cyclist, and there hasn't been a time since when a claim as audacious as that could be made."

The absurdities continue into the twentieth century, with Hutchinson's history thankfully blanking the variant favoured by those who believe that Henri Desgrange invented everything from the Hour to the Pyrénées. Here's Hutchinson on bikes at war:

"The army had put so much effort into the fighting bicycle. Not just two-wheelers either. They repeated all the mistakes of the nineteenth century when they combined human power with heavyweight engineering. There was a four-wheeled pedal-powered gun carriage that bore two men and two machine guns. On the flat it was a bit ponderous, but on a hill it was impossible to progress at all, which was hardly a surprise since it weighed nearly a fifth of a ton. On the other hand, when you fired the guns, the lack of any mechanism to deal with the recoil meant it could quite literally fly. For a slightly lighter-weight fighting bike, the army designed a tandem with a machine gun for the stoker to operate. Again, one suspects recoil might have been an issue if you were attempting a broadside while under way, but at least it opened up the possibility of a dogfight on tandems."

Racing does feature in the second half of Re:Cyclists, when the British League of Racing Cyclists comes along in the 1940s and reinvents road racing after the British had spent most of the previous half century tear-assing up and down code-named drag-strips in search of new PBs for 10, 25, 50 and 100 miles. Very quickly we're on to the road to Lottery funding and dominance in the Olympic Games, stories familiar at this stage from all the other the histories of British cycling to have been published in recent years (Great British Cycling, The Long Race to Glory, Heroes, Villains and Velodromes, et cetera). Compared with the first half, it's all a lot less colourful, lacking in the eccentricities of the early history. It probably wasn't in reality but maybe it's all still a bit too recent for us to see the absurdities of it in the same way we can see the absurdities of the nineteenth century.

Overall, Re:Cyclists, is an enjoyable romp through Britain's cycling history, a good primer that touches lightly on most of the important topics without lingering too long in any place and over-staying its welcome. If you want to know how the British got from the hobby-horse to hipsters on fixies, this is as good a place as any to start finding the answers.