The Men of Paris-Roubaix, by Max Leonard

The men of Paris-Roubaix, through the lens of the Agence Meurisse's photographers.

Share All sharing options for: The Men of Paris-Roubaix, by Max Leonard 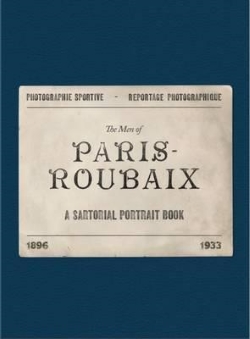 Title: The Men of Paris-Roubaix - A Sartorial Portrait Book
Author: Max Leonard
Publisher: Isola Press
Year: 2016
Pages: 48
Order: Isola Press
What it is: A book of 21 postcards featuring photographs from the Bibliothèque Nationale de France's collection of late-nineteenth and early-twentieth century cycling photography
Strengths: If you've ever spent hours getting lost in Gallica's photo archives you'll love this and if you haven't spent hours getting lost in Gallica's photo archives this will make you want to
Weaknesses: You'll have to buy two copies, one to keep and the other to tear the individual postcards out of

On the penultimate Sunday of April, 1919, Easter Sunday, three men raced into Roubaix at the end of the first running of the Queen of the Classics since 1914. Two weeks earlier Milan-Sanremo had been won by Angelo Gremo, ahead of Costante Girardengo. Now, in France, two old rivals were about to go wheel to wheel to see which of them would take the win there: the French star Henri Pélissier, who - with judicious help from the commissaires - had come within a couple of minutes of winning the last Tour de France before the outbreak of the Great War; and his Belgian rival Philippe Thys, the man who had taken the victory in that 1914 Tour. The third rider, Honoré Barthélémy, was at that point a relative unknown, but just the sort of rider Henri Desgrange had written about that morning in L'Auto when he spoke of old heroes and the rising tide of ambitious newcomers battling it out in the race's return.

Two stars of the future who took part in the 1919 edition of Paris-Roubaix: Léon Scieur and Jules van Hevel. Photographed by Agence Meurisse ahead of the race. Image taken from Max Leonard's The Men of Paris-Roubaix

The April 1919 edition of La Vie au Grand Air reports that 80 French riders and 53 Belgian - along with six from other nations - had entered the race. Eighty of them - 46 French, 34 Belgian - lined up in Suresnes for the start. After a minute silence to remember the fallen of the war - which included three-time winner Octave Lapize (1909-1911) and the victor in 1913, François Faber - the race got under way. Only 25 riders reached Roubaix within the time allowed. Max Leonard's The Lanterne Rouge tells us that of 40 following cars only five made it to Roubaix at the end of the race's 280 kilometres. The twentieth edition of la pascale was already earning the appellation it would become famous for: l'enfer du nord, a phrase coined only months earlier in the pages of L'Auto.

With the Armistice signed and representatives of the warring nations negotiating in Paris, L'Auto - under whose aegis the race had by then fallen - had sent Victor Breyer and Eugène Christophe (the latter then yet to become famous for his forks broken in the Tour in 1913) on a scouting mission to see whether it would be possible to return Paris-Roubaix to the calendar. The usual passage through Arras was a no go and Desgrange needed to be sure that the alternative route - as well as the rest of the route - was passable.

Breyer - British-born to French parents - was one of the movers and shakers in cycling at the turn of the last century. As a journalist and race promoter he visited the USA many times in search of new talent to bring to Europe. One of the founding fathers of the UCI Breyer had served as a director of the Tour de France - 1905 and 1906 - and was then an employee of L'Auto. Before that, though, he had been on the staff of Le Vélo and it was to him in 1896 that the task of scouting out the route of the first edition of Paris-Roubaix had fallen. Now, twenty-three years later, he was being sent out to do the same again.

In his report Breyer drew a portrait of the Dante-esque reinvention of the lands through which the race was run:

"Shell-holes one after the other, with no gaps, outlines of trenches, barbed wire cut into one thousand pieces; unexploded shells on the roadside, here and there, graves. Crosses bearing a jaunty tricolour are the only light relief."

In Breyer's report, it fell to Christophe to coin the phrase that gave the race its new name:

"From Doullens onwards the countryside was nothing but desolation. The shattered trees looked vaguely like skeletons, the paths had collapsed and been potholed or torn away by shells. The vegetation, rare, had been replaced by military vehicles in a pitiful state. The houses of villages were no more than bare walls. At their foot, heaps of rubble. Eugène Christophe exclaimed: 'Here, this really is the hell of the North.'"

The roads and the men weren't the only damage inflicted upon Paris-Roubaix by the Great War. The little vélodrome in Roubaix that Théo Vienne and Maurice Perez had opened in 1895 - and had created Paris-Roubaix in order to promote - had been stripped of its wooden boards and its steel supporting structure and the race went in search of a new finish.

Starting in Suresnes the revised route took the riders out of Paris through Le Vésinet and then north through Méru, Beauvais, Breteuil (112 kms), Amiens and Doullens. The traditional route would then have seen the riders heading north east, through Arras but now they detoured north, through Saint-Pol-sur-Ternoise before tracking north-east to Béthune and then east through Cambrin, La Bassée and Annœullin before again tracking north through Lesquin and into Roubaix (280 kms), finishing on the the Avenue de Jussieu (leading up to the now dilapidated Vélodrome Roubasien).

By the time the race reached Saint-Pol-sur-Ternoise and the vicinities of what had been the Western Front the peloton was reduced to no more than a dozen riders. Between Cambrin and La Bassée Henri Pélissier pulled away from the diminished peloton, with only his younger brother, Frances, able to match his acceleration. The two powered away and the group behind fractured as the riders gave chase.

Robert Jacquinot and Louis Heusghem, who were in the select group at the front of the race as it reached Saint-Pol-Sur-Ternoise. Photographed by Agence Meurisse ahead of the race. Image taken from Max Leonard's The Men of Paris-Roubaix

The two Pélissiers opened up a gap of several minutes which they then frittered away as Frances faltered. Initial reports blamed la fringale - which in early cycling reports always strikes me as being like the dreaded lurgi, a catch-all excuse for God-knows-what having happened - although later reports suggest he may have punctured. Whatever it was, it afforded Philippe Thys the opportunity to bridge across. He and the elder Pélissier pushed on, la ficelle and le basset, old foes working together.

At Lesquin the duo were delayed by a level crossing and a stopped train. This gave Honoré Barthélémy - yet to lose an eye to a flint during the 1920 Tour de France - the chance to catch up. At which point Pélissier decided he'd waited long enough and, fearing others catching up, scrambled across the closed barrier and through the waiting train and over the barrier on the other side. By the time Thys and Barthélémy had gathered their wits and followed suit the train had begun to pull away and the two were forced to leap from the moving carriage before remounting and chasing after Pélissier.

Into Roubaix the three raced together. For Pélissier and Thys this was almost a rerun of 1917's Giro di Lombardia, where Thys had narrowly defeated Pélissier. Then, it was Thys who had opened up the sprint but here, as they sped along the Avenue de Jussieu, Pélissier jumped first, putting a bike length into his old rival and holding him at that as he sped across the line, with Barthélémy a further length back. Two weeks later Pélissier doubled his victory by also taking the win in the race Paris-Roubaix was created as a preparation ride for: Bordeaux-Paris.

Henri Pélissier. On the Thursday and Friday before the race riders were required to sign in at the offices of L'Auto and it is possible these studio portraits of the riders were taken then by the Agence Meurisse. Image taken from Max Leonard's The Men of Paris-Roubaix

Speaking in 2010 Christian Prudhomme noted how newspapers had created the Tour de France, radio had made it popular, and television had made it rich. What's true of the Tour is true of the rest of cycling, though there might be some dispute over quite how the television wealth has been shared. Missing from Prudhomme's brief history of the evolving role of media in popularising cycling was the part played by photography, despite the fact that the camera has been telling the story of cycling pretty much since the beginning, helping to promote the stars of the day and the bikes they rode. As photography evolved through the decades that increasingly has been achieved through action shots, bike races brought alive by the images photographers have captured.

In its earliest form, though, photography also helped promote cycling through studio shots of the riders, sometimes posed on stationary bikes, promotional shots for the manufacturers paying their wages. You can probably bring to mind such images of riders of old: some, such as early images of Major Taylor, have achieved a certain iconic status. Increasingly forgotten today, though, is the simple studio shot, the rider without his bike, the rider in street clothes. Drawing on the archives of the Agence Presse Meurisse held by the Bibliothèque Nationale de France Max Leonard's The Men of Paris-Roubaix helps to correct that, using images taken by the photographic agency ahead of the Queen of the Classics, Paris-Roubaix.

Looking at these images today - particularly the ones from 1919 above - one wonders what story the sitters were hoping their portraits would tell. Was Pélissier's choice of his military uniform some kind of statement or just the reality of the moment? One of the enduring legends to come out of the war has it that Pélissier at this stage had been partly responsible for Charles Crupelandt - winner of Paris-Roubaix in 1912 and 1914 - being banned from racing over alleged black market trafficking during the war: was Pélissier's attire a statement in relation to this?

While the 1919 images have a certain utilitarian feel to them - with the simplicity of their poses and lighting they could almost be passport photos - later images are more technical:

One of the most beautiful, perhaps, is the image of Bartolomeo Aymo, the Italian star immortalised by Ernest Hemingway in A Farewell to Arms:

Jules Masselis and Georges Passerieu, photographed by the Agence Meurisse ahead of Paris-Roubaix in 1912 and 1914. Images taken from Max Leonard's The Men of Paris-Roubaix

Reproduced as a book of detachable postcards - each comes with a brief description of the rider and his performance in Paris-Roubaix - Leonard's selection of images from the Agence Meurisse's archives affords the twenty-first century cycling fan an opportunity to imagine how earlier cycling fans saw the sport, in a stylishly produced little book. Everyone should own a copy

The Men of Paris-Roubaix - A Sartorial Portrait Book, by Max Leonard