A photo novel evoking the life of Alfonsina Strada, the only woman to start the Giro d'Italia.

Share All sharing options for: Alfonsina, by Ilona Kamps 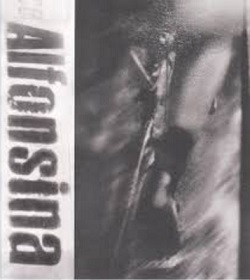 Title: Alfonsina - Cycling is My Life
Author: Ilona Kamps (with Willie Verhegghe, Birgit Bekker, Bas Steman, Mariska Tjoelker, Herman Laitem, and Frank Heinen - translated from Dutch by Claudio Di Palermo and Bruno Spaepen (Italian text) and Fiona Graham and Antoinette Fawcette (English text))
Publisher: Astrada
Year: 2016
Pages: 236
Order: AlfonsinaStrada.com
What it is: A (photo)graphic novel evoking the life and times of Alfonsina Strada who twice rode the Giro di Lombardia and took part in the 1924 Giro d'Italia
Strengths: A beautifully produced book that tells its story with eloquence and intelligence
Weaknesses: If you need narrative spoon-fed to you, this is not for you

I think that, setting out from there, I will put together, piece by piece, the perfect city, made of fragments mixed with the rest, of instants separated by intervals, of signals one sends out, not knowing who receives them.
~ Italo Calvinio
Invisible Cities

Born in the village of Riolo, in Castlefranco Emilia, on March 19, 1891, Alfonsina Strada (née Morini) died September 13, 1959. In the sixty-eight years in between those two dates Strada achieved many things, one of which means she is remembered even today, more than half a century after her death: she started the 1924 Giro d'Italia.

Strada wasn't always so remembered, her fame today is largely down to Paolo Facchinetti who, eight decades after that twelfth edition of the corsa rosa, brought her story to a new audience when, in 2004, he published the first biography of Strada, Gli anni ruggenti di Alfonsina Strada - Il romanzo dell'unica donna che ha corso il Giro d'Italia assieme agli uomini (The Roaring Years of Alfonsina Strada - The Story of the Only Woman to Ride the Giro d'Italia Alongside the Men). Pretty much everything we know about Strada today - the stories told and retold in Giro histories, the play, the song - is rooted, directly or indirectly, in what Facchinetti wrote.

Ilona Kamps first crossed paths with Alfonsiona Strada in 2011, while visiting the cycling museum at the Madonna del Ghissalo. One of Strada's bikes is to be found within, with a simple sign hanging from it: Santuario Madonna del Ghissallo / Bicicletta di Alfonsina Strada / 1a donna al Giro d'Italia anno 1924 / Bicicletta anno 1954. Within a year Kamps was at Strada's graveside in Milan's Cimitero Cusano, having read Facchinetti's account of her life. A photographer with a passion for cycling, Kamps had decided to retell Strada's story: not in words, not in historical images and newspaper clippings, but in new images that evoked elements of that story. Raising finance through crowdfunding, over the course of three years Kamps visited places that Strada had visited seeking not so much a ghost, but the spirit of her time.

In addition to more than 150 black and white images produced by Kamps, Alfonsina - Cycling is My Life comes with Dutch, Italian and English text. Willie Verhegghe provides a poem. Birgit Bekker a dedication. Bas Steman and Mariska Tjoelker, an imagined exchange of correspondence with Strada that firmly locates the way Strada is remembered today by most. Herman Laitem provides a biographical sketch. Frank Heinen offers a curious story. These are the supporting structures of Alfonsina: absolutely essential if you are not familiar with Strada's story, providing you some grounding for the images Kamps produced. But it is the images themselves that make Alfonsina the book that it is.

'Online crowdfunding is the future,' said Alofonsina, sinking her teeth into a kiwi, peel and all. 'What do you know about the future?' asked my girlfriend, 'You've been dead over half a century.'

'That was crass but true,' said Alfonsina, in a tone that suggested she would have reddened with anger had she not been entirely monochrome.

How to describe the story Ilona Kamps tells in Alfonsina? Upon first flicking through it my initial thought was that it reminded me somehow of Chris Marker's La Jetée: a story told through images that are at times banal, at times abstract, unfocused, images that are somehow as imperfect as memory. For Alfonsina, the voice-over narrating Strada's story - none of the images are captioned - comes from within, your own knowledge of Strada's story: knowledge you either bring with you to the book or knowledge gleaned from the tales told by Kamps's collaborators.

Alfonsina and La Jetée share more than just a structural similarity. The story in La Jetée is about the difficulty of turning back time and revisiting the past. In a way, that is equally true of Strada's story: we can never escape the present and so the story of Strada told today is, well, the story of how Strada is seen today. Some choose to portray her as a feminist icon for the twenty-first century: where Marie Marvingt (apocryphally) tried and failed to enter the Tour de France and so 'shadow rode' the course1 Alfonsinsa Strada succeeded in gaining admission to the Giro d'Italia. Some choose to embellish her story: rather than acknowledge that the race's organisers were complicit in her participation in the Giro, they choose to bastardise the story and have Strada pulling the wool over everyone's eyes by entering under a false name, adding a comedic element that reduces the story to farce. Some choose to see her simply as having played a role in a row over money. Strada can only ever be viewed through the prism of the present, her own story having been lost long, long ago.

This, I think, is one of the ways in which Alfonsina achieves something out of the ordinary: Kamps is not trying to depict a life, she is trying to evoke elements of it. She only tells a part of the story, the rest you have to tell yourself. And so for each of us the story is different. The pictures, Kamps has said, are not about one but about many Alfonsinas.

"She had the innate grit and determination to keep going in the face of obstacles and opposition. She was fuelled by the proud faith that she could achieve the goal she had set herself. In short, she was driven essentially by passion."

Strada's Giro ride tends to overshadow her other achievements. She set an unofficial record for the Hour in 1911 (the UCI didn't get around to recognising women's Hour records until 1955 even though women had been setting and breaking them since at least as early as the 1890s) and a 500 metres record in 1908. In 1909 she had raced in front of the Tsar in St Petersburg. In 1917 and 1918 Strada participated in the Giro di Lombardia. This was a woman more than capable of taking on the corsa rosa.

"It's strange how time seems to be suspended if you circle around the Velodrome for long enough."

Kamps's next aim is to take Strada's story on the road, to turn Alfonsina into a mobile, multi-media exhibition, mixing photography and performance, bringing her story to more and more people. For now, though, you can enjoy that story in the intimate confines of your own home in this beautifully produced book that tells its story with eloquence and intelligence.