Share All sharing options for: The Velocipede Races, by Emily June Street 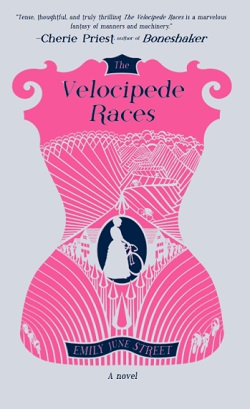 Title: The Velocipede Races
Author: Emily June Street
Publisher: Emily Blue Publishing
Year: 2016
Pages: 257
Order: Microcosm Publishing
What it is: A steampunk cycling novel featuring an Alfonsina Strada-like hero
Strengths: Both familiar and exotic at the same time, the story rolls along entertainingly at a gentle pace
Weaknesses: Maybe a little bit flabby in places and could do with shedding some excess to get down to racing weight

Emmeline Escot's obsession with cycling began on her eighth birthday when her twin brother, Gabriel, got a shiny red velocipede as a present and she got a petticoat, colour not noted.

I'd wanted to ride like Gabriel, but even if the rules of the riesen class hadn't forbidden it, my new skirt would have hindered me.

In time, Emmeline finds ways to break the rules of her class, enough so that she can atleast watch others race:

I couldn't have gone to watch the race without dressing like a boy, and I couldn't have dressed up like a boy to watch the race without Gabriel's complicity. My brother permitted me to wear his clothes; he kept my secret and condoned my lies. I yanked at his jacket, making certain it covered my breasts, and followed Papan and the swaddies. They had begun to make bets. Though it was barely past noon on a Moonday, I suspected they had already been drinking. Papan had taken a shot of malt whisk directly after breaking his fast. He had offered a 'good luck' shot to Gabriel and scoffed at his refusal, saying, 'what kind of man are you if you can't handle a shot of malt whisk on a big occasion?'

Between her feckless father's spending on alcohol and gambling and the money both her parents lavish on her brother as they attempt to turn him into a successful velocipede jockey Emmeline finds herself trapped in the glass box of Serenian society, confined to a life of finding a suitably wealthy suitor to marry:

'Emmeline, do you have any idea how much rides on your good marriage? This family depends on you. We must find you a rich husband, and if it gives you discomfort to do it, I expect you to be a strong girl and suffer in silence.'

Emmeline, though, doesn't want to be just someone's wife, she wants to be like her brother and race velocipedes:

Despite the pressure from Maman, I did not intend to find a husband. Marriage would crush my racing dreams as surely as the man standing across from me was crushing his cigarillo beneath his boot. He caught me watching his boorish behavior and looked sheepish.

In fact, Emmeline wants to race velocipedes even more than her brother, who has the talent but not the temperament to make it in the Arena:

'It's hard, Emmy.' He leaned back on his bed, covered his eyes with one hand, and scrunched his face. 'The crowd, the anticipation, the animosity of all the jockeys - it's hard. Everyone is so reckless. They ride like it's life or death and I - ' he paused ' - I don't want to get hurt. I'm too cautious. You have to be reckless to win. Reckless and ruthless.

Though alike her brother in so many ways, Emmeline is his opposite when it comes to her willingness to take risks and soon enough, with her brother's assistance, she has graduated from watching others race at the Arena to joining them on the practice track, in disguise:

And so I found myself in third position at the practice-track starting line, mounted and snapped into the old velo with my brother holding the back of my seat in the starting line. Other jockeys were arrayed around me. Gabriel's hand shook as he held me in place.

Her dreams of racing, though, come a cropper when she meets Cassius Everett, of poor breeding but great wealth:

I studied Cassius Everett more closely. His clothes were not so flash as Mr. Voler's. Oh, he'd tried. The fabric of his jacket was of the best quality, his boots were just as shiny, but the cuts were out of mode. It was as if he'd known only what the good materials were but none of the fashions. He looked as uncomfortable in his attire as I was in mine.

In a thrice - and after a slight comedy of manners Oscar Wilde would have laughed at - Emmeline and Everett are engaged to be wed. Licketyspit they're married.

Is this the end of Emmeline's velocipede dreams or has she chanced upon the one man who can help her make those dreams come true?

While The Velocipede Races requires a lot of exposition - this is a cycling novel written to be understood by non-cyclists, requiring some very public explanation of the sport - it somehow doesn't feel too heavy-handed: in part the steampunk exotica disguises the exposition, but there is also a graceful air to the way it is delivered. You're not being lectured:

The gunshot signaled the take off. The jockeys dropped into line from their starting positions.

'No one is ever bold early,' Everett commented. 'No one ever tries to get a different position off the starting line because - '

'It's considered bad form,' I interrupted without thinking.

Everett's gaze slid sideways at me. 'How did you know that?'

'Gabriel, of course. He says there is a whole - ah - etiquette - that governs the paced laps.'

'It's a well-kept secret amongst the jockeys,' he said. 'The etiquette and honor in the races. It's a private matter amongst them.'

'Of course,' I said. 'Their sponsors and the track swaddies just want them to win. But between jockeys, it's a different balancing act. You need friends as well as rivals on the track.'

I have talked before about how so many cycling novels - now and in the distant past - tend to be romances. The romance here is partly a means to an end - the husband is little more than a deus ex machina - but it's also mirroring something in the main plotline, about society's expectations, the roles people are required to play, and the consequences of diverging from the norm. This isn't quite Cat territory of girl meets boy, boy rams his tongue down girl's throat, girl wants to show boy that she too has a tongue like an electric eel and can do more than tickle his tonsils with it and they go at it like wild animals only for a cycle of misunderstandings to ensue. There is a cycle of misunderstanding but there's a lot less swapping of bodily fluids and gazing into one and other's eyes going on here, with Street concentrating more on realising a believable world, one that doesn't overly fetishise Victorian society but does borrow heavily from its familiar history.

The Velocipede Races works by taking something familiar (track racing, specifically keirin races) and mixing it with something familiar-ish (nineteenth century society) before adding a touch of exotica (linguistic changes), all within the setting of a girl-dressed-as-boy comedy of errors (everyone from Shakespeare to Blackadder has done it): you know where you are with it, sort of, and yes, you probably know where you're going too, but the sights along the way are novel and catch the eye.