Share All sharing options for: Britain by Bike, by Jane Eastoe 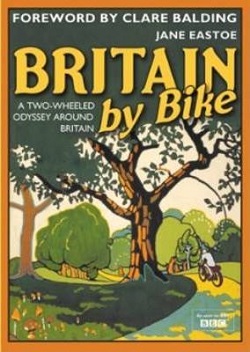 A TV tie-in - the series originally went out on the digital graveyard better known as BBC 4 in 2010 - Britain by Bike comes from the pen of Jane Eastoe, who has given the world such books as Victorian Pharmacy: Rediscovering Home Remedies and Recipes (with Ruth Goodman), The Art of Taxidermy (with Polly Morgan), Fabulous Frocks (with Sarah Gristwood), Vintage Roses: Beautiful Varieties for Home and Garden (with Georgianna Lane) and a whole host of other National Trust-type titles for National Trust-type types. That is to say, it's a safe, nostalgia-filled affair. The comfort reading of guide books.

Coming out in the same year as Michael Portillo's wildly successful Great British Railway Journeys series, Britain by Bike - the TV series - followed pretty much the same formula: take an old guidebook and recreate its journeys meeting new people along the way and filling the air with ADD-friendly gobbets of content. Portillo used Bradshaw's Guide, presenter Clare Balding (then heading for the peak of her TV ubiquity) used Harold Briercliffe's Cycle Touring Guides series (1947-1950). Although when I say 'use' it's really little more than a hook to hang something on, with only fleeting references to Briercliffe, at best.

For some reason, these cycling programmes haven't really been working on TV. As well as Balding, there was Mickey Flannagan's Detour de France and Michael Smiley's Something to Ride Home About: the former a rather awful Brits-abroad affair that aired on Sky, the latter an engaging opportunity to enjoy Northern Ireland that I don't think made it out of BBC 1 NI.

It's not as if there's not a wealth of hooks to build such programmes around - the Victorian era produced whole libraries full of books detailing the adventures awheel of their authors, through the UK, Europe and beyond, all of which are ripe for 're-envisaging'. It's probably got something to do with that thing AA Gill caused such a storm with, presenters "puffing up the nooks and crannies at the bottom end of the nation."

Britain by Bike - the book - offers a Lonely Planet / Rough Guide1 whirl around Great Britain. Which is quite funny, for though it champions the pleasures of leisurely cycling - "No one becomes familiar with a country by driving though it at great speed," Eastoe tells her readers - Britain by Bike is itself a whirlwind of a ride. Consider for instance, the Isle of Man:

"The Isle of Man is a self governing crown dependency situated in the middle of the Irish Sea, has scenic charm, wildlife and old-world character. The Tourist Trophy (TT) races take place every May and June and attract some 50,000 bikers of the motorized type; outside of these months the island is well worth exploring by bicycle. It has 500 miles (800 km) of quiet country roads and boasts six designated off-road cycling tracks of varying degrees of difficulty."

Eighty words and then on to the next destination.

Of course, to get to know the country the book talks about, you need to get on your bike and ride through it. So where does Britain by Bike recommend one goes riding? The book's fourteen routes are as follows:

This is the type of book Britain by Bike is meant to be: not very challenging, physically or intellectually. But with lots of pretty pictures.