Stumps and Cranks, by Sonia Sanghani

An introduction to cycling for amputees.

Share All sharing options for: Stumps and Cranks, by Sonia Sanghani 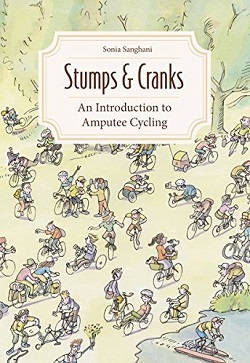 Title: Stumps & Cranks - An Introduction to Amputee Cycling
Author: Sonia Sanghani
Publisher: Meyer & Meyer Sport
Year: 2016
Pages: 350
Order: Meyer & Meyer
What it is: An introduction to amputee cycling, covering everything from why to how to where
Strengths: While you can get all sorts of advice about taking up cycling in all sorts of places, Sanghani takes the time to consider issues specific to amputees and illustrates her advice with stories from people who have been there and done that, some practical, others just meant to show it can be done
Weaknesses: If you're not an amputee you're unlikely to want to read it - but you could still think about buying a copy and donating it to your local limb centre.

It is easy to be cynical about the Olympics. They're a five ring circus. They were a way of fighting the Cold War without actually fighting. They're just a way of buying national pride with bangles and baubles. You can look at the Olympics and wonder whether they ever actually do any real good. Sure, yes, you get odd stories like Bradley Wiggins being inspired by the Games and in turn inspiring others. And sure, yes, you get the regeneration projects. And sure, yes, you get the oodles and oodles of cash flowing into the coffers of the IOC and out to IFs like the UCI. But...well, the Games just breed cynicism.

The idea for the book, Sanghani tells us, came when - after having been an amputee for a decade or more - she decided to take up cycling and wanted to read a book to guide her along the way. Failing to find one, she decided to write one. And, with the aid of stories and advice from dozens of other amputees - some competing at a high level, others doing just what Sanghani herself wanted to do, pooter about for the hell of it - that's what Stumps & Cranks is.

Dan Sheret is one of the people Sanghani spoke to:

"I was a happy fat little furniture maker going about my life, and the next thing I know I am an amputee solo riding across the American deserts in July and loving it."

Sheret was driven in part by people telling his this was something he couldn't do:

"In 2003, I was told on many occasions that what I was trying to do I could not because of my disability. They were right. As long as I accepted my limitation, then I could not do so. My cycling was a way for me to understand my limitation was of my own making and that of the social norm."

One of the curious things about Sheret's story is that becoming an endurance cyclist was just a phase. It helped him get past viewing himself as disabled. Now, he commutes a dozen mile to work, and he's happy.

Not everyone is going to be like Sheret and Sanghani knows that. Answering the question of why cycle as an amputee she offers many different reasons, the best of which is the most obvious:

"They enjoy the freedom, the exhilaration, the tests of courage and endurance, and, most of all, the feeling of well-being and pride that a good bike ride provides."

Cycling here is about mental health as much as physical well-being.

Stumps & Cranks can be quite specific in the advice it offers. That's not to suggest it has all the answers: sometimes it just has to tell you where you can find out more. There's a chapter on prosthetics, which can be basic enough or can come with microprocessors and sensors that measure angles and forces and adjust themselves for the specific conditions. As with all the book's chapters, the information here is imparted by Sanghani with different contributors offering anecdotes about their own personal experiences. Robert Bailey, for instance, offers this:

"One of the problems with riding with a regular prosthetic foot and cycling shoe is the cleat is under the ball of the foot. The whole leg wants to rock back and forth. You can't 'mash'."

"One of my biggest frustrations is trying to get amputees to understand that you can do 99 per cent of everything on your standard leg. It is only when you want to do that very last one per cent that a specific limb brings any benefits, so lesson number one - just try it!"

Aimed as it is at those only taking up cycling as an amputee, Sanghani's is the sort of advice that, I think, helps you ask the right questions rather than promises to give you all the answers.

From prosthetics Sanghani moves to a couple of chapters looking at bikes and bike parts and accessories, with bikes covering everything from road and mountain bikes to recumbents, trikes, handcycles and electric bikes. This covers all the general knowledge needed along with some amputee-specific information and - again, as with all the other other chapters - comes with stories from amputees that will either gee you along or highlight issues you mightn't have considered.

Learning to cycle is something most people don't think about, it's something they picked up as kids and have forgotten about. As an adult amputee...well here's Mona Krayem's story:

"I had both my legs amputated below the knee about one year ago due to an accident. Before, I cycled quite a lot, but obviously it is totally different without legs and with prosthetics. After I cam back from rehabilitation with my first prosthetics, I tried to ride my old bike again - at least give it a try. The therapists and doctors couldn't say whether it would still be possible, and I didn't meet anyone who rode a normal bicycle with the same amputations (one-leg amputees or others riding a handcycle or tricycle). This was actually rather discouraging as I couldn't even get on the bike without falling or sliding off the pedals and losing balance, let alone talk about riding or getting off without a mess!"

After covering the complicated basics of bike riding for amputees Sanghani moves into more general terrain, with tips about where to ride. Not specific routes, but advice on things to think about when route planning: do you want to ride in a park, fancy some off-road rough stuff, are you looking for flat roads, can you cope with climbing, all that sort of stuff that experience teaches you slowly but a book needs to throw at you quickly. Again, Sanghani's advice is illustrated with stories from people who've been there and done that and is there to show you what can be achieved.

After that, there's tips on eating right, training right and how to maintain your bike. Again, all of this is very basic stuff if you've been doing it for years, but if you're an adult amputee coming to it for the first time here it's all explained with tips that are specific for amputees. Then it's on to bodily care and how to deal with the wear and tear of cycling on your stump. Closing out the book, Sanghani offers a couple of chapters that consider the different things amputees might want out of cycling, from spin classes to the Paralympics, from 'cross or BMX to to triathlons and track racing. And there's even room for unicycles too, which you don't find in many how-to cycling guides.

All told, Sanghani is offering a good, solid introduction to cycling, with specific attention paid to the needs of amputees. What if - as is likely - none of this applies to you? Should you buy a copy of Stumps & Cranks? Well you could think about donating a copy to your local limb centre. You may not get the benefit of it, but someone else will.