Ask a Pro, by Phil Gaimon

Bantz-and-snark from the author of Pro Cycling On $10 A Day.

Share All sharing options for: Ask a Pro, by Phil Gaimon 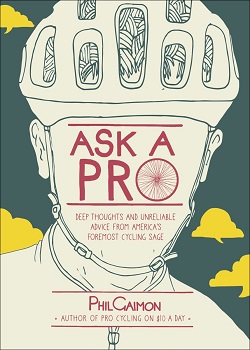 After the unexpectedly wild success of Pro Cycling on $10 a Day sometime US pro Phil Gaimon returns with an edited collection of his VeloNews 'Ask A Pro' columns.

Here's an idea on what Ask A Pro offers.

Q Do cyclist abstain from sex before events? I've heard that sex affects testosterone levels and can hurt performance.

Yes, but only if 'abstain' means 'we don't have sex because no one wants to date a dude with shaved legs who mostly lives in a bus and marginal hotels.'1

Q I've got an old Bottecchia with a classic Team ADR paint scheme that I used to race on. I commute on a Specialized Tri Cross, and I want to have a second bike in the garage for training. Do you think it's worth trying to update it, or am I better off just selling it and getting something more modern? It seems like upgrades could be difficult because of the older Campy stuff it's equipped with, but I've got a sentimental attachment to this heavy cro-mo bike from college.

It sounds like you've got things mixed up a bit, with a fancy bike for commuting and a beat-up old one for training. Use the Bottecchia for commuting, maybe setting it up as a fixie.2 It's a cool old bike, and you don't need a high-performing, smooth-shifting, fancy machine to get around town. Sell the 'cross bike and get a new road bike to train on instead.

If you can afford it, though, the best bet would be to just buy more bikes and keep them all. I don't see how anyone can get by with less than seven bikes. Remember Maslow's hierarchy of needs from college psychology class? Me neither, but it went something like food, shelter, sex, commuter bike, track bike, 'cross bike, mountain bike, race bike, time trial bike, and backup race bike. You're not even halfway there yet, and who are you to argue with the founder of modern psychology?

Q I always name my bikes. Do you ever get attached to a bike? Do you give them names?

When I toured Masi's warehouse in California, I met a bike named Vincere Bellissima3 . We rode away together, but it wasn't meant to be, and I don't like to talk about it.

Q My husband has bikes and stuff everywhere, and he only rides recreationally. How many bikes do you have, and how many do you need?

Cycling is an equipment-intensive sport. I think I'm up to eight bikes4 , and I can say with a straight face that I need all of them. It's my job, though, so that doesn't necessarily mean that your husband needs that many. Does a guy who likes to doodle in Microsoft Paint need the same computer as a graphic designer? I think a good number of cyclists are more interested in collecting the gear as a hobby than actually using it, so it might be less about how good of a rider he is, and more about how much he enjoys spending time on rubbing his frames down with VeloShine.5 Overall, your husband's bike needs depend on whether you can afford it, and if you're a good wife or not. If you love him, you'll work harder and encourage him to quit his job so he can play with his 20 bikes full-time. Does he have a nice town bike? Masi's Soulville6 has internal gearing, cork grips and a lovely paint scheme.

As far as space is concerned, I live in an apartment, so my training bike has a permanent home standing in the corner near the door, and the rest of the bikes hang on the wall. I'm good about getting rid of old stuff I don't need anymore and keeping my tools and parts impeccably neat (although I'm a complete slob in most aspects of my life), so it's reasonable to expect the same of your husband.

Sometimes, my girlfriend (who doesn't ride bikes) will find a grease stain somewhere unexpected, like the inside of the refrigerator. I can't explain that, I refuse to clean it, and I resent the implication that might have caused it.7

Q Are you exited about your new Pinarello Dogma? Are there any bikes you get attached to? Do you give them names?

Of course I'm excited! Pros are just like nerds at heart, or at least we all started out that way.8 New Bike Day is highly anticipated, almost religious holiday for us. I think it does New Bike Day, Christmas Day, New Kit Day, then Cyclists's Birthday (all cyclists celebrate their birthday on January 1, when our racing age goes up.

I try not to get too attached to any bikes, though, You have to hate it to thrash it properly, and I take pride in putting my bike through lots of long days in the elements. The biggest reason, though, is that I know I'll be getting a new one every year, or I could snap it in half piling into the Cat II who wouldn't wave at you, and so I don't want to feel like I've lost a loved one. It's the same reason soldiers didn't make friends in foxholes.

Q I heard there was an old Euro tradition against shaving your legs the night before a race, because it saps energy. Is this true? Does anyone follow that?

I don't know what leg-shaving technique they use in Europe, but I've never found leg shaving to tire me out. Perhaps Europeans do it more vigorously than I do.9