Self help for sporting types with a twist of mindfulness

Share All sharing options for: The Brave Athlete, by Simon Marshall & Lesley Paterson 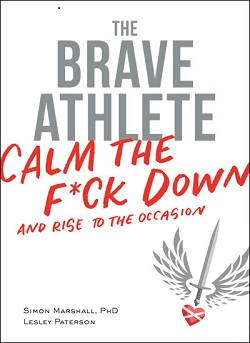 Title: The Brave Athlete - Calm the F*ck Down and Rise to the Occassion
Authors: Simon Marshall and Lesley Paterson
Publisher: VeloPress
Year: 2017
Pages: 342
Order: VeloPress
What it is: Self help for sporting types with a twist of mindfulness
Strengths: Colourful and playfully presented
Weaknesses: It really should be an interactive app, not a book
Extract: VeloPress

Sport psychology, as everyone knows by now, was invented in the early years of the new millennium by Steve Peters for Dave Brailsford and British Cycling. Prior to 2000 sports psychology basically consisted of hurling abuse at people - telling them they were fat or they should just fuck off and have a baby. But, under the guidance of Peters, Brailsford, and the brains trust in the Manchester medal factory, it all became more brilliant. Now it wasn't just about shouting, it also had monkeys to be spanked.

Some will tell you that that is a load of old nonsense, that sports psychology has been around for a century and more (one legend has its origin in cycling) but you shouldn't listen to them. Steve Peters, the new millennium, the Manchester medal factory, that's all you need to know. Oh, and the spanked monkeys, can't forget them.

Wherever it began, sports psychologists are everywhere today. And the industry is squeezing both ends of the tube of toothpaste in order to make its money: running courses to train the sports psychologists of tomorrow while busily teaching the sports people of today all those tricks like visualisations, positive mental attitude and monkey spanking. Some will tell you that the whole thing is just a lot of fashionable nonsense. The Irish football pundit Joe Brolly, for instance, has been busily playing to the peanut gallery and churning out column after column about what a lot of nonsense the whole thing is. Thing is, he's not entirely wrong, as Simon Marshall - one half of Braveheart Coaching and co-author, with three-time triathlon World Champion Lesley Paterson, of The Brave Athlete - also points to problems with college-educated sports psychologists:

"After working with athletes in lots of different sports, I realized that my rigorous academic training hadn't prepared me to deal with real people. Nothing was ever as simple or as clear as the college courses and textbooks made out. Many of the techniques handed down from the ivory towers turned out to be utter nonsense when I tried to use them on real athletes."

So what's Marshall and Paterson's unique selling point? Three brains. We all have three brains, apparently. A Chimp brain, a Professor brain and a Computer brain:

"Your Professor brain deals with facts, truth, and logic. Your Chimp brain deals with feelings, impressions, and emotions, based on instincts and drives. Your Computer brain acts like a machine that takes orders from the Chimp or Professor and runs stored programs based on your experiences and memories so you don't have to think too much."

The power of three being pretty cool - just ask Prue, Piper and Phoebe - Marshall and Paterson double-down on it and say we need to arm ourselves with a trio of tools, namely Heart, Wings and Fight:

There then follow three chapters on honing your passion, motivation and identity (Heart); four chapters on dealing with obstacles, setbacks and conflicts (Wings); and five chapters on getting stuck in with new battle skills (Fight).

Each chapter comes with funky infographics - they go with the whole playful air of the book - and some exercises for you to complete. Some of these are like those quintessential Cosmo quizzes you find yourself doing while waiting for the dentist and really make you wish there was an app attached to The Brave Athlete so you didn't have to work out your score yourself. But I suppose if you're too lazy to do a little math you're not really going to get very far with what The Brave Athlete is trying to sell you. So bring a pencil.

Let's try one of the quizzes, 'The Pressure Test'

The pressure test is designed to help you figure out if you're actually under real pressure of if you've just convinced yourself that you are. For an upcoming race or event that is stressing you out, answer the following questions and sum the responses:

Sum the responses to each question to create a pressure score.

Does it work? I'm afraid that the nature of these things mean that's down to you. If you want to get something out of it, you will. If you don't, you won't.

The problem with the whole thing, of course, is that The Brave Athlete - Calm the F*ck Down and Rise to the Occasion claims to be encouraging you to embrace your fears while the authors themselves are too scared to spell fuck without an asterisk. Go figure that one out.