The Hardmen, by the Velominati

A cycling miscellany of myths and legends from the pro peloton

Share All sharing options for: The Hardmen, by the Velominati 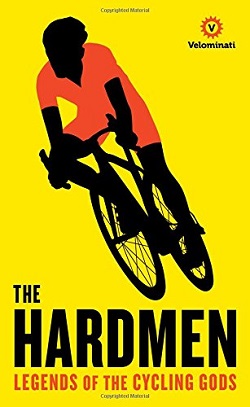 Title: The Hardmen - Legends of the Cycling Gods
Authors: The Velominati - Frank Strack, John Andrews and Brett Kennedy (with a foreword by David Millar)
Publisher: Pursuit Books (UK) | Pegasus Books (US)
Year: 2017
Pages: 234
Order: Profile Books (UK) | Pegasus Books (US)
What it is: A cycling miscellany of myths and legends from the pro peloton
Strengths: Who doesn't love being told how hard the hardmen used to be?
Weaknesses: You either get the Velominati or you don't

I vividly recall the second time I heard cycling's world famous n+1 joke. It was in Croydon, back in the days when Sean Kelly was still winning races, and told to me by a guy who could well have been the inspiration for the Fast Show's Colin Hunt: his n+1 joke came right after one which in its totality - build up and punchline - was 42. If I'd had a copy of L'Équipe with me I'd have rolled it up and bashed him about the head with it. But I didn't. Instead I did what we all do in those circumstances: smiled politely and wished the earth would open up and swallow me. It didn't.

Fuck knows how long people have been telling people to HTFU. It sounds like something the Dude would have told Donny. But it isn't. It has - like n+1 and a lot of other catchphrases - been appropriated by the Velominati, as Rule 5. Ironically, Rule 5 has since been appropriated by a British bike shop. Karma's a bitch, but what you gonna do? Harden the fuck up.

Velominati was born in 2009, founder Frank Strack placing an ad seeking writers for a new website and Brett Kennedy and John Andrews coming on board. The Rules - a series of catchphrases, punchlines in search of jokes - quickly became the centre of the site and Strack, Kennedy and Andrews styled themselves the Keepers of the Cog: a Justified Ancients of Mu Mu-type joke only without the artistic follow through. The sort of thing that's trying too hard to be camp to be camp.

That HTFU rule is at the heart of the Velominati's second venture away from the world of bits and bytes and into the realm of ink and dead trees, The Hardmen - Legends of the Cycling Gods. In it we find that the Velominati love Richard Virenque:

"If he hadn't been a bike racer, Richard Virenque could easily have been a French film star. His swarthy good looks and lean body, piercing eyes and smooth-as-silk voice would have served him well as a crime-fighting action hero, a French James Bond who's done a lot of hard drugs."

Back in the day - the day being those long forgotten days of Gen-EPO - Virenque used to climb hills quite fast and celebrate his victories like a little boy who'd just mastered the art of peeing into the bowl. But, oddly, it is not for his mountain climbing prowess that Virenque is beloved by the Velominati. Instead they celebrate him for a ride he produced "on one of the flattest, most sprinter-friendly parcours on the one day race calendar: Paris-Tours."

Say what? Say this:

"Virenque jumped away from the peloton after only 12 km, and would have expected to be joined by at least a half-dozen companions. But no one came. No one except the archetypal suicide breakaway merchant Jacky Durand. A climber and a dreamer. The peloton relaxed and let them go, knowing they would be seeing them again in a couple of hours or so. Maybe they didn't remember Dudu's win in Flanders nearly a decade earlier, or were too young to know, or perhaps believed that such a feat couldn't be achieved twice. And Virenque, well, he'd not be much use to Durand in this situation either. On they pedalled, kilometre after kilometre peeling away, building up a huge eighteen-minute buffer to the chasers with only 60 km raced. There were still almost 200 more to go."

At 70 kilometres the pair had a seven minute lead. At ten it was less than a minute and:

"with two short climbs to go it was death or glory time. Virenque chose the latter and finally freed himself from Durand on the penultimate climb. Four kilometres to go, twenty seconds lead. The peloton eats that up on a k, let alone four. Well, it didn't work out that way. Not for the peloton, or their mathematical advisers, or whoever should have been telling them to 'ride harder'. At just 2 km to go, Virenque had a slim fifteen seconds. 'Reechard' buried himself to within an inch of crying on the flat Avenue de Grammont and, on his final look behind, saw that his six-hour stint at the front of a flat race that he wasn't supposed to win was about to pay off."

And that is the win the Velominati love Virenque for. Paris-Tours. The sprinters' Classic.

"But Feargal!" I hear you say, "didn't Virenque dope and didn't Virenque deny doping? How can the Velominati possibly celebrate such a man?" Come, come now. When their other cycling gods include Eddy Merckx (multiple failed tests, constant denials) and Sean Kelly (multiple failed tests, constant denials), then to banish Virenque just because he doped and denied it, that would make the Velominati hypocrites. And that - they insist - they are not:

"Even to include Virenque in this book was a divisive and controversial choice. While all of us enjoyed watching his exploits in the Alps and Pyrenees during the Golden Age of the Bad Old Days at Le Tour, some of us now hold him in the sort of esteem we also reserve for the likes of Armstrong and Rumsas. While all those guys were doping, Lance and Raimondas were also being bullies and coercing others into doing some nasty deeds on their behalf. In that respect, Tricky Dicky's biggest crime seems to have been crying on television while trying to blame everyone else for the Festina Affair, for which he was made the poster boy. (We won't describe it all over again. If in need of illumination see any other Cycling book, ever. Or Google.)"

"But Feargal!" I know, I know, I know. If bullying is the criteria for excluding people from the Pantheon then surely Virenque deserves to be excluded for the role he played in destroying the career of Christophe Bassons? And surely that should also mean that Marco Pantani shouldn't be listed among the gods given what he did to Andrea Tafi? And isn't it now accepted in many quarters that even Bernard Hinault was just another bully? And since all of these - Virenque, Pantani and Hinault - are heroes to the Keepers of the Cog, does that mean that the Velominati really are hypocrites?

You might think that. But actually they have a get out of gaol free card:

"we're more interested in riding our bikes than we are in doing things like 'research', so this book is written in true Velominati style: (ir)reverantly and subjectively. We imagine that if it feels true, it probably is true. And if it happens to be wrong, then maybe being wrong makes it right." 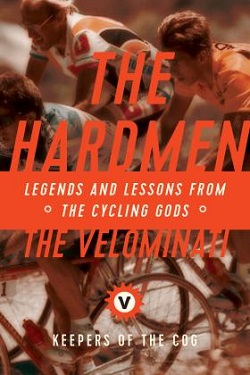 The inclusion of so many women is something to be applauded. Writing about bikes can he rather laddish - especially in stocking-filler miscellanies like this that have to appeal to the lowest common denominator - and while the Velominati very much conform to a rather stereotypical macho notion of cycling they are at least trying to show that there's a little bit more to it all than just that. Up to a point. For all the good is rather undone by using Lizzie Deignan as an opportunity to mansplain the problems of women's cycling - no one wants to talk about the cycling - instead of actually talking about women's cycling. And all the good is rather undone by reducing Beryl Burton to a story about 'getting chicked'. And all the good is rather undone by reducing Nicole Cooke to an anti-doping warrior - doubly so when done in a book that so happily celebrates doping. But hey, baby steps, right?