A guide to cycling in the south-west of Ireland

Share All sharing options for: Cycling Kerry, by Donnacha Clifford and David Elton 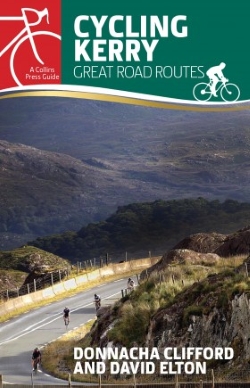 Title: Cycling Kerry - Great Road Routes
Authors: Donnacha Clifford and David Elton
Publisher: Collins Press
Year: 2017
Pages: 152
Order: Collins
What it is: A guide to cycling in Kerry
Strengths: Comprehensive coverage of the area with easy to follow instructions
Weaknesses: It's a bit utilitarian and doesn't really sell the place

Dublin for the cup, Kerry for the holidays.
~ Traditional Irish saying

They call it the Kingdom. Westeros is away up north, the Stormlands and the Land of Always Winter. Down in the Kingdom it's all Ryan's Daughter and Excalibur, with a bit of Harry Potter thrown in for the kids. And, these days, a lot of Star Wars. An awful lot of Star Wars. But now, with Donnacha Clifford and David Elton's Cycling Kerry - Great Road Routes Kerry is also the Kingdom of la petite reine, the Tralee-based duo behind KerryCycling.com letting others in on the secret of the best places to ride in Kerry.

The Ring of Killarney

The route descriptions tend toward the utilitarian, descriptive without ever really selling the selected routes. Each route comes with a bit of an introduction, with the turn left here, turn right there bit following. Here we are being introduced to the Gap of Dunloe:

"The Gap of Dunloe and the Black Valley are among the most renowned areas for tourists in Kerry and with good reason. The glacial landscape appears timeless and for the most part untouched by modern life. The majority of the route is on quiet roads with little traffic and ample opportunity to soak up the surrounds, including views of [the] Lakes of Killarney, the MacGillycuddy's Reeks, Purple Mountain, Ladies View and Muckross Park. The surface for most of the route is as good as you would hope for in a remote area such as this; however, caution is required in one or two areas. This route is relatively short but due to the varied terrain and some challenging climbs it is a good idea to begin the cycle with plenty of provisions as options for buying food are located only at the start and towards the end of the cycle."

The Gap of Dunloe

And here we are being instructed through the Skellig Ring:

"Leaving Ballinskelligs, follow the signposts to the right at a fork in the road for Portmagee and continue along the Skellig Ring. Shortly after this fork in the road the first climb of the day, up to Croom, begins. This climb has a steady average gradient of 3% and is just under 3km in distance. Descending from Croom there are fantastic views of St Finan's Bay ahead as well [as] the Skellig Islands in the distance. The larger of the two islands, Skellig Michael, which is designated as a UNESCO World Heritage Site, was visible in all its glory in the 2015 Star Wars film The Force Awakens, which has boosted tourism and interest in the area significantly. The Skellig Islands will be a prominent feature for much of the remainder of the cycle. At the base of the descent is the home of the Skelligs Chocolate Factory and café, which is very difficult to pass without at least a quick peek in the front door."

In addition to Kerry the Great Road Routes series also includes Cycling South Leinster (by Turlough O'Brien) and Cycling Munster (by Dan MacCarthy). Additional titles are due to be added in the coming months.