Share All sharing options for: Indurain, by Alasdair Fotheringham 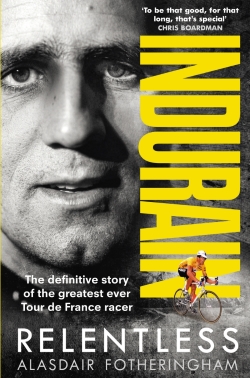 Title: Indurain - Relentless
Author: Alasdair Fotheringham
Publisher: Ebury Press
Year: 2017
Pages: 314
Order: Penguin
What it is: A biography of Miguel Indurain, five-time winner of the Tour de France, two-time winner of the Giro d'Italia and one-time holder of the Hour record
Strengths: It's a biography of Miguel Indurain
Weaknesses: It's far from definitive

The realisation dropped on Sáenz like a small hawk of failure that suddenly blots out the sky. I was, it seemed, no longer about to join the four greatest bike riders in history. Victory in my fifth Tour de France was being stolen from me by a man who was ascending about ten seconds a minute faster than it was possible for any human to climb.
~ James Waddington, Bad to the Bone

Miguel Indurain - Spain's five-time winner of the Tour de France, two-time winner of the Giro d'Italia and one-time holder of the Hour record - was the poster child of Gen-EPO. How anyone can claim to have written the definitive biography of Miguel Indurain and yet failed to address this simple and inescapable fact is beyond me. But here we have it, Alasdair Fotheringham's Indurain - Relentless, "the definitive story of the greatest ever Tour de France racer." I will at least say this for Fotheringham: the lengths he goes to in Indurain to avoid having to spend any length of time addressing Indurain's status as the poster child of Gen-EPO are truly impressive.

Consider Eufemiano Fuentes and Michele Ferrari: you won't find either of them named in Indurain, despite each having been part of the entourage of different rivals faced by the five-time Tour champion and despite Fotheringham having the opportunity to refer to each by name.

Consider Sabino Padilla: Indurain's doctor at Banesto between 1990 and 1996 is reduced to a walk-on part with no dialogue, a mere extra.

Consider Francesco Conconi: the famous collaboration with one of the masterminds behind Francesco Moser's 1984 assault on the Hour record - a man who had been given lire 50 million (about GBP 20 thousand) from CONI to buy a fridge and centrifuge for the separating and storing of blood products, and a man who, according to Fotheringham, only "became well known at a later date as a sports doctor of dubious reputation" - that famous collaboration was nothing more than an attempt to get some advice on weight loss. Still, if another rider transformed by weight loss, Lance Armstrong, can consult Michele Ferrari for advice on saddle height I don't think anyone should be too surprised by the idea of Indurain only wanting to check with Conconi what the Ferrara branch of Weight Watchers was like.

Remarkably, Fotheringham's handling of the Gen-EPO story isn't actually the thing that's most surprising and annoying about Indurain. I mean, let's be reasonable: no one can be expecting the Spanish inquisition here, right? No one can be be expecting Indurain to be hard hitting, no one can be expecting Indurain to take a piece of sandpaper to the gilt and see what lies beneath the surface, no one can be expecting anything other than a buddy-buddy pally-wally game of softball here. This is Alasdair Fotheringham. This is Miguel Indurain. So if it isn't the not entirely unexpected white-washing of the story's central Gen-EPO strut, what is the most surprising and annoying thing about Indurain? It's that the subject himself is barely present in his own biography.

"There were also the criticisms - already - of Indurain for being too withdrawn, too inexpressive. L'Équipe even went so far as to cite a nameless journalist from Madrid who claimed that 'after twenty years, Indurain's wife would still have no idea of the man she shares her bed with ... Apart from a polite smile on each finishing podium, the only sign of any emotion was that gesture at Val Louron,' the newspaper added. 'He was such a great character that he had no need to express it,' was Echavarri's polite, if ironic, explanation."

What's interesting about that? What's interesting about that is that we're 120-odd pages into this biography of Miguel Indurain at this stage and that is the first intimation that the subject might ever share a bed with anyone, that's the first intimation that, off the bike, Indurain has a life - let alone a wife - and doesn't just sit in a corner, power on stand-by.

"Echavarri and Unzué were witnesses, along with Indurain's sister, at the wedding ceremony held at a church in Pamplona [in November 1992] - another sign of how deeply Indurain's personal life and work loyalties remained intertwined at the time."

So intertwined were Indurain's personal life and work loyalties at the time that the whole of the relationship - from wooing to wedding - is reduced by Fotheringham to a single paragraph. Another hundred pages pass before we again meet the wife, again in a quote from a news report, this time El Mundo Deportivo, on Indurain's ignominious exit from professional cycling during the 1996 Vuelta a España:

"This is not the Indurain we know. It's a man overloaded with pressure who is pedalling to please the rest of the world whilst he thinks of his wife, his son, his home and his land."

But, then, this is a biography, marriage and fatherhood are not the sort of things one expects to read about in biographies.

The third in Fotheringham's series of books on Spain's Tour champions - following his Federico Bahamontes biography The Eagle of Toledo and his Luis Ocaña biography Reckless - and coming just a year after his failed attempt to tell the story of the 1998 Tour in The End of the Road, Indurain - Relentless comes 25 years after Sam Abt told the first chapters of the Spaniard's story in Champion - Bicycle Racing in the Age of Miguel Indurain, nearly 20 years after Adrian Bell's translation of Pablo Muñoz's Miguel Indurain - A Life on Wheels and 15 years after Jeremy Murray's translation of Javier García Sánchez's Indurain - A Tempered Passion. There have been countless articles about the Spaniard with the lungs like galleon sails and the resting pulse rate that makes you think the next beat will be along mañana but, apart from those three books, no other English-language biographies have appeared.

Among the people interviewed by Fotheringham for the book are Indurain's brother, Prudencio, his Banesto boss Eusebio Unzué, ONCE boss Manolo Saiz, team-mates Pedro Delgado and Dominque Arnaud, rival Abraham Olano, and Chris Boardman. Indurain himself did not grant the author an interview, though Fotheringham does quote from earlier interviews he conducted for British cycling magazines.

Fotheringham pads out the first section of the book with a history of the birth of the Banesto (née Reynolds, now Movistar) team Indurain rode for: we're 40-odd pages in before Indurain turns professional and Fotheringham can get excited about the Tour de la CEE; we're on page 110 before we arrive at the 1991 Tour de France. Barely 110 pages later we're on to 1996 and Indurain's failure at the Tour and exit at the Vuelta. Another 50 pages wrap the whole thing up. Apart from the race reports, most of the book is filled with Fotheringham and his interviewees - if it isn't every single one of them it sure as hell feels like it is - telling us how nice and how normal Indurain was and how success and fame didn't change him.

This isn't just the niceness on the road, the gifted victories - Claudio Chiappucci at Val Louron in 1991, Toni Rominger in Serre Chevalier in 1993, Luc Leblanc at Hautacam in 1994, Johan Bruyneel in Liège in 1995 - it's in every little thing that Indurain did, from the way he sat down at the breakfast table to refusing to accept more money than he thought he was worth:

"Arguably the most important moment of 1987 for Indurain was not completing his first Tour, but extending his contract with Reynolds for another three seasons. Interest ranged form PDM to Zor at home and Indurain refused the latter on the grounds that the 50 million pesetas he was offered by directeur sportif Javier Mínguez 'was an awful lot of money': 'I expected any answer but that one, and I didn't know what to say,' Mínguez said later. It was not only Mínguez who was stumped at Indurain's lack of financial ambition: according to Unzué, when his own team offered him a new contract, Indurain has been the only rider in their 36-year history who responded, 'Wouldn't that be too much?'"

Ultimately, for Fotheringham, it is the niceness that makes Indurain stand head and shoulders above all others:

"And where Indurain surely trumps almost everybody is how positive a legacy he leaves behind as a person, his acting as the living proof that the unpleasant, ruthless aspects that some claim are necessary for a top athlete to succeed can, in fact, be superfluous. 'The peloton can't make you win a race, but it can make you lose one,' observes Boardman. 'But people didn't think "I'm not letting that bastard do that" because he and his team treated you with respect, they were nice, they did a good job and that makes a big difference. Did people feel intimidated? I think I'd call it frustration because his team was almost impossible to combat, as well as feeling a deep fondness for him.'

'As a person, he's the greatest Tour champion,' comments Pedro Delgado. 'Everybody would agree cycling's greatest is Eddy Merckx and I myself have got a soft spot for Bernard Hinault for the way he raced. But as that son that every mother would like to have, or a sportsman showing a kind of dignity at all times, who lets others have their moments of triumph … that sense of fair play, I think Indurain is the example to follow. Totally.'"

One day the reality of Indurain's legacy will be properly considered and we will have to ask ourselves if being nice is enough, we will have to ask ourselves just how fair he played. One day we will talk about the reality of the role played by blood transfusions in the 1980s and EPO in the 1990s, we will talk with openness and honesty about the rise of Gen-EPO and the role played by men like Eufemiano Fuentes and Michele Ferrari and Sabino Padilla and Francesco Conconi, we will properly recognise the role they played in this sport and afford them the credit that is their due. One day we will get a biography of Miguel Indurain that isn't afraid to address all aspects of his career, on and off the bike, a biography that isn't afraid to consider what fairness and niceness really mean and isn't afraid to ask whether the example set in those years of the sport really is what we need to be following. Until then...