Jacques Anquetil - the man, the myth, the model.

Share All sharing options for: Anquetil, Alone, by Paul Fournel 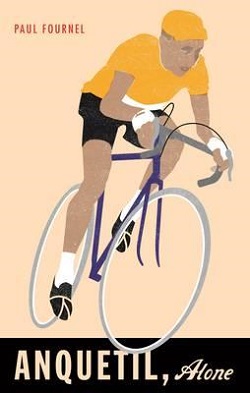 Title: Anquetil, Alone
Author: Paul Fournel (translated by Nick Caistor)
Publisher: Pursuit
Year: 2017 (first published in France in 2012)
Pages: 117
Order: Profile Books
What it is: Jacques Anquetil as man, myth and model
Strengths: Fournel is one of the more thoughtful writers on cycling and here he's doing a lot more than simply serving up anecdotes about his idol
Weaknesses: Brevity

Music, states of happiness, mythology, faces worn by time, certain twilights and certain places, all want to tell us something, or have told us something we shouldn't have lost, or are about to tell us something; that imminence of revelation as yet unproduced is, perhaps, the aesthetic fact.
~ Jorge Luis Borges, 'The Wall and the Books'
(Selected Non-Fictions, trans Eliot Weinberger)

"This photo opens a door inside me. It tells me secrets the others don't reveal. It shows the whole mystery of Anquetil. It's an image following great effort, a day of sunshine and sweat, a day of anguish, perplexity, of reflection and fear. A troubling photo. One eye is in darkness, the other is fixed on some mysterious problem. Anquetil doesn't know he is being photographed, otherwise he would not have let so much of himself come through, so much fragility and doubt. This is the secret man one can only guess at, the one the magazine doesn't even mention, the one Anquetil himself isn't sure he wants to know."

Originally published in France in 2012 and already adapted for the stage Paul Fournel's Anquetil tout seul is finally finding an English-speaking audience - through Nick Caistor's translation1 for Pursuit Books - as Anquetil, Alone. It is the first 'biography' of Jacques Anquetil to be published in English since Paul Howard's Sex, Lies and Handlebar Tape - The Remarkable Life of Jacques Anquetil, the First Five-Times Winner of the Tour de France. The reason it's a quote-unquote 'biography' is that it's a mix of Carlos Arribas's Ocaña (a novel telling of the life of Luis Ocaña), and Nick Hornby's Fever Pitch (a fan's notes): borrowing from Tim Krabbé - "The facts miss the heart of the matter; to give us a clear picture, the facts need a vehicle, the anecdote." - Fournel offers anecdotes about both himself and Anquetil that are sometimes, on one level, not factually accurate, but on a higher level, being more revealing, are always true.

The real question, though, is just what is being revealed here?

Is it Jacques Anquetil?

"Behind me, on the bumper of the maroon Hotchkiss or the white 203 Peugeot, my name is painted in capitals so that the public will recognise me. Black letters on a white background: ANQUETIL. My name pursues me and pushes me on. I am on my own heels. Fleeing myself."

Is it Paul Fournel?

"I was ten years old, I was small, brown-haired and tubby. He was big, blond and slender, and I wanted to be him. I wanted his bike, his allure, his nonchalance, his elegance. I had found my model and my opposite wrapped into one. Both of these were impossible to achieve, which meant I had a long way to go."

Is it a golden age of cycling reporting in which less was so much more?

"He was the last great champion of the written tradition: for the greater part of his career, he could count on the services of two of the finest pens in the history of cycling journalism, Pierre Chany and Antoine Blondin. The first of these is a model of precision. He has no equal in giving races a start, middle and end, to extract the essence of each and every event, and to situate every single hill in the overall history of cycling. Blondin is the bottle imp, the perfect writer. His prose sparkles, and he sprinkles the peloton with his wit to make it shine. They are on Anquetil's side, and count themselves as his friends. They help him emerge from many a difficult situation smelling of roses. More than that, when necessary they know how to put a flea in his ear and give him a good kick up the backside, pretending they are angry with him."

Or is it cycling as as a form of muscular mindfulness?

"Anquetil always maintained that total concentration was the key to a successful solo effort - not to think of anything but the race, to focus on the effort, not to let your mind wander, or allow yourself to be invaded by your obsessions or your dreams ... On this occasion, and as far as one can tell for the first and only time, he departs from the practice and allows himself to dream. 'As I rode along I told myself that if this had been a rest day rather than another stage, I would have gone to the Vigorelli track and tried to break the hour record. I saw myself in Milan, pushing hard on the pedals, not easing up a single second.' To dream of riding while you're in a race, to dream of the hour record during a time trial, is a very strange sort of reverie for a so-called dilettante! I loved that story, and told it to my mates, who couldn't understand it at all. I trained to be able to dream of cycling as I rode. I've climbed so many mountains in that happy state."

Do you have to know Anquetil's story in order to read Anquetil, Alone? Most of us actually know far more about him than we realise: most all the anecdotes Fournel uses as vehicles will probably be familiar to you, from doubling the Critérium du Dauphiné and Bordeaux-Paris to fearing death in the Tour de France because of a fortune teller's prediction. Bringing some knowledge to the table, though, may help spot the biographical deficiencies in Fournel's telling: Fournel is a fan, he is a romantic, he is a story-teller. He is not a biographer and this is not, strictly, a biography.

With or without knowledge of Anquetil you can still enjoy Anquetil, Alone on its own merits, Fournel doesn't exactly hide what he is doing, makes it clear that a lot of the book is about deception. It's about Anquetil deceiving himself:

"My eyes impaled his back like a harpoon; now I've got him. He's going to pull me in on the line that has been stretched between us. He set off three minutes before me and yet there he is, already within reach. The road bends now and hides him from me, but I'm not letting him go. He's going to reel me in."

It's about others deceiving Anquetil:

"Paul Wiegant, his trainer at the time, wants him to achieve a new feat. Throughout the race, he gives him false time checks. He tells him he is twenty seconds behind schedule, then ten. Anquetil gets annoyed with the chronometer he always wears on his right wrist, and thinks it must be broken. He pushes even harder on the pedals, lost in his sensation. He no longer knows where he is. He feels as though he is speeding along, but he's not gaining ground. If he is to believe Wiegant's checks, at 10 kilometres from the finish he is only equalling the previous year's time.

"When he reaches the Parc des Princes, Anquetil discovers that in fact he has smashed his own record by one minute twenty seconds. [...] He's exhausted, in a bad mood. Furious at having been fooled. He would have been more than happy with a few seconds' victory. His fury cools, but a truly Anquetil anger remains: a few weeks later, he decides to sack Wiegant and never take part in the Grand Prix des Nations again."

It's about Anquetil deceiving others:

"I never tire of telling journalists my secret: in a time trial you have to start flat out, finish flat out, and in between take a moment to catch your breath, snatch some rest, a few kilometres where the pressure is lowered and strength is rebuilt before the final sprint. Of course, I never do that, but I tell anyone willing to listen that's what I do. My rivals all end up trying the same. 'Maybe he's right. Maybe that's the secret of his strength.' They lift off the pedal for an instant, and that always gives me the edge. While they're slowing down, I go flat out from start to finish."

Whatever it is, simple biography or complex allegory, Anquetil, Alone is - like Fournel's previous cycling books Need for the Bike and Vélo - some of the most thoughtful writing about cycling you will find published today in English. Fournel may not be quite as passionate, may not be quite as fiery, as Arribas in Ocaña, but he is the equal of Arribas in celebrating cycling's romantic side. And that's something worth celebrating.