Share All sharing options for: Gods, Rockstars & the Cobbles, by Karen M Edwards 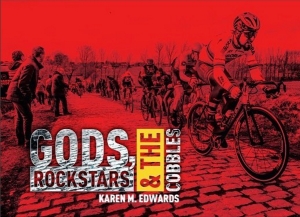 What links Slavoj Žižek, Muhamed Ali, James 'Whitey' Bulger, Judy Garland, Bobby Fishcer, the Big Mac and the Makarov pistol? They've all been the Elvis of something: philosophy, boxing, gangsters, homosexuals, chess, sandwiches, pistols. What of cycling? It wasn't Eddy. The Men Who Pontificate on These Things, they say he was the Beatles. And not even Cyclist has yet managed to compare Peter Sagan to Elvis Presley. They could just be too young to have heard of the King.

Maybe cycling didn't used to be rock and roll - but surely it is now? The Monuments, they're our stadium gigs. The Grand Tours, they're our festivals. The American races and the Australian races and the British races and the Norwegian races, they're the touring circuit for the hard-working heroes, the stars of tomorrow and the support acts of today. And the Worlds, well they're our Eurovision: a bit naff and national alliances wreak havoc with the form book, allowing the good guys to come out with nul points.

Put another dime in the jukebox, baby.

Seen through the lens of Irish photographer Karen M Edwards, cycling's stars of today are proper rockstars, loved and adored:

from Gods, Rockstars and the Cobbles, by Karen M Edwards

Maybe some of this comes from Edwards's youth, in the age of the King (not the hamburger-munching, jumpsuit-loving one, but that man of few words, Sean Kelly, one-time King of the Classics): "I grew up in the Kelly and Roche era, where boys in my class in primary school were sprinting up and down the village." The village there is Banteer, Cork, your typical Irish village - pub, crossroads, train station - except in one regard: most other Irish villages it's the GAA that produces the local heroes, with Banteer it's cycling. Back in the noughties Paídi O'Brien made it as far as VC la Pomme Marseille, alma mater for Philip Deignan, Nico Roche, Dan Martin, and many other Irish riders. And Eddie Dunbar - who won the U23 Ronde this year - is currently riding for Axel Merckx's Axeon-Hagens Berman outfit and in 2018 will be riding for Aqua Blue, the Irish pro-conti outfit with the Cork-born, Monaco-based millionaire Rick Delaney as their sugar-daddy (an Irish Oleg Tinkov - he made his money in property and drinks - Delaney is promising to revolutionise cycling's current economic model by doing away with sponsors and funding a team through e-commerce).

from Gods, Rockstars and the Cobbles, by Karen M Edwards

Edwards herself, she was racing with her local club when fate intervened: she came down with a lurgi and her doctor told her she needed to lay off the bike for a while. Rather than give the whole thing up cold turkey, Edwards decided to buy a camera and photograph the races she couldn't compete in. Having studied art and fashion design in college in Cork, Edwards found her métier: "It wasn't a sudden thing. I guess I was told by a few photographers that I looked up to in the professional field that apparently I had something! At the time, I had no confidence. Zero. I thought they were just saying it."

Covering three races from the 2017 cobbled classics season - Omloop Het Nieuwsblad, the Ronde van Vlaanderen and Paris-Roubaix - Gods, Rockstars & the Cobbles is designed with fans in mind: it's the sort of book you might bring with you to races and get the riders to sign their pictures (the paper and the use of white space actively encourages this): "these were things I was thinking off, like a kid taking the book to the races, getting it autographed ... just things I see little fans do ... and they grow up, and will have those memories."

And there's a poster in the back too, to be torn out and pinned to your wall with Blue Tak: "This was something I thought would be great, do I pull out the poster or not, like a teenage boy with those comic's in the 70s ... a retro feel, almost. I wanted it to be old style, a throwback." The poster boy, well he's Peter Sagan. Edwards contributed pictures to a book the Bora team put out, Boys'N'Bikes, but he's also one of her pictures that's got the most feedback on Instagram.

That popular photo-sharing app has some influence on the design of Gods, Rockstars & the Cobbles, with various photos coming hash-tagged (#Greg / #PersonalJesus / #Dirt): "It's a nod to our time. We're hash-tagging everything." Instagram is also, I think, influencing how we consume cycling photography. Dedicated cycling sites host image galleries from most races but fans are ignoring them and going direct to the photographers on social media, following their favourites.

Much of the book reflects the way Edwards herself sees the sport. She came to it as a kid, watching her uncle Mick in local races and she'd marvel at the riders: "That's the way I saw them as a kid, watching my uncle race, they were heroes. I used to stand in awe looking at them." That awe is captured in Gods, Rockstars & the Cobbles, in the looks on kids' faces and in the crowds thronging around riders.

Her own heroes in the pro peloton, guys like Philippe Gilbert ("I've been a fan of his for years, I hate saying that, cause you know, I actually respect all the riders"), they're the Gods, and in 2017 Edwards was fortunate to see them performing at their best, not least Gilbert at the Ronde:

"He was unbelievable that day. We had got word he was out on his own, that he'd broken away. We thought, he couldn't hold it out that long, not with the group of chasers. I watched him, gritting his teeth, absolutely giving his soul. You just wanted him to have it, that victory. I barely made it to finish. I felt I had the wrong position. But I have this idea in my head. Always make it work. Look, and see. Tell your story. So... I could see him approach the line, look around, clip out ... and launch his bike about his head like a trophy. It was hazy, Flandrian flags billowing, the crowd roaring. It was a pure spectacle never to be forgotten. A beautiful winner. I absolutely love the Belgians ....I want to be adopted!"

As well as Bora's Boys'N'Bikes book, Edwards released an earlier collection of pictures, Chasing Races, and her work has appeared in magazines such as Simpson, Soigneur, Volata, and Peloton. For her, the images in Gods, Rockstars & the Cobbles are about trying to capture something she learned to love as a kid, watching her uncle back in Banteer:

"I want always to bring something that makes people relate and bring them close to the race and the riders. Make them almost taste the dirt, experience the atmosphere ... experience the passion of it all. I guess my eye sees those things, the legs aching on the Muur, the power that's needed, all the things that in the midst of the race everyone is so busy roaring for their heroes that they don't notice. There's a lot of emotions at races. I guess my own inner emotions are expressed too, through the beauty, suffering and whole spectacle of racing. I've tried to bring out our era, our views etc in the book, with a retro feel. It reflects me a lot too, my love of art, marvel, photography, fashion, style. And let's be honest here, pro cycling oozes style."