The Cyclist's Tale and Other Short Cycling Stories, by Kevin Haylett

Share All sharing options for: The Cyclist's Tale and Other Short Cycling Stories, by Kevin Haylett 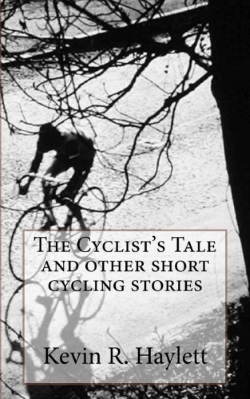 Title: The Cyclist's Tale and Other Short Cycling Stories
Author: Kevin R Haylett
Publisher: Kevin Haylett
Year: 2016
Pages: 198
Order: Kevin Haylett
What it is: A dozen interlinked short stories featuring a group of riders from the same cycling club
Strengths: Haylett's love of the sport is clear in the tales he tells
Weaknesses: Haylett's tales tend to come from the darker end of the spectrum

At the beginning of each ride he would mount his odometer, the latest bike computer, on his handlebars. It reassured him to look down at the numbers, check the effort. Could he go any harder? Was it a hard ride? How far had be been? Legs, mind and computer often disagreed.

Garvey, he likes to use the Col du Garage for his training rides:

It was all set up. As if heading out, he slipped a couple of bottles in their cages. Fuel for the efforts. Then Garvey switched on the TV, computer and cooling fans and selected the Alp. After ten minutes of warming up he pressed the green 'Go' button. It was the routine, barely bearable. It wasn't really riding.

The television kept him company as he cycled up the Alp. An antiques program distracted him. Buying and selling. The cheery presenter was explaining how the contestants had just purchased a fake. They were going to need their bonus buy.

Warmed up, he was pushing some good power now. His best time for the Alp was forty-eight minutes. Not far off the record: of course that was on a real road. The two giant fans, set each side, kept him cool. Sweat dripped onto the towel. Three or four times a week the garage became the road.

Sometimes, out on the real road, Garvey is able to summon up those sessions on the rollers and use the distraction of Bargain Hunt to help him get over real climbs. In races, though, he relies on another kind of distraction:

Just as Garvey had said, at the base of the last climb, or on a bend or wherever he had decided that day. Garvey would rise out of the saddle a fraction, sit down and with what seemed utter ease, his pace would increase. Within a few seconds he was ahead. In a few more he became distant. Those at the front could see him putting his earphones in. It was as if he was going out on an afternoon jolly. They could complain about the headphones. But why? Even for those that could look up, the race was over.

One day - this would be a day before Baby Driver became a thing and wearing headphones while pulling off epic rides attained a certain cachet - Jamie gets a chance to find out just what it is Garvey listens to after he drives off the front and ploughs on to victory:

Leaving the door open to his car, Garvey announced he was off inside for a pee. Dubrowski saw it first; Garvey's music player and headphones were on the seat.

"Go on Jamie!" Encouragingly, Dubrowski motioned to the music player:

There had been a lot of speculation about the player's contents in the club, it was a hot topic on the café stop agenda. It was a rare opportunity, he'd have to be quick.

Pushing the earpieces firmly in, the palms of his hands itched. There was no sound, just noise. Jamie was sure he'd pressed play. There, something, Layers of sound in the noise.

He's not the only one in the Wheelers so troubled. Many of the characters in this collection of interlinked short stories from Kevin Haylett are in one way or another troubled. And almost all the dozen tales told come from the darker end of the spectrum, tales from the dark side. Mike suffers from hallucinations which only a hard effort on the bike can keep at bay. Or there's Jake, who lies unconscious in a hospital bed, the ride he was on before his accident playing on a loop in his mind as the doctors wait for the swelling on his brain to go down:

Jake had ridden this section, not forty minutes ago. Yet it felt strange. Unworldly. This had happened before, there was something. Something different, something intangible. His speed was good, he was now climbing up into the village. The air feels cool against his face. It was a wonderful day.

Worlds collide and merge. Time separates. A driver pulls up. A motorbike lies on the side of the road, it is a twisted carcass. The rider had been thrown against a tree. He is dead, his neck is broken and his face is twisted in agony and pain. Across the road a cyclist lies beside his bike. The cyclist lies still, with a slight smile across his face, he is unconscious.

For all their darkness, Haylett's tales are rooted in the ordinary, quotidian tales of time trials and hill climbs. The darkness, though, is never far from the surface:

The marshal raises his voice.

"Three, two, one." Fingers indicating the remaining seconds, disappeared one by one. The marshal shouted encouragement.

The crowd erupted. Every spectator knew. Tom was there for his son, his family, the Vélo. Their voices, a wall of sound, carried Tom up the Pike. Tom exploded upwards with everything he had. Tom, now riding with the Vélo. His legs on fire. Deep down he could feel Luke behind him, His Dad just up ahead. Joe and Granddad were behind Luke. They were all calling:

Cold air filled Tom's lungs. His heart beat as fast as it could. Swinging up the first section, he remembered the silence of that morning in 2006. And now the Pike was exploding around him, willing him upwards. Luke, Joe, Dad and Granddad, they were there with him. The shouts of the crowd filled his mind.

"Go on Tom. Push. Go." Tom pushed and pulled at the pedals as hard as he could.

Now it was getting steep. Really steep. He pushed the bike over side-to-side to get some leverage and pulled on the bars. Only two hundred and fifty metres to go.

Two hundred and fifty. Time slows, eyes are becoming bloodshot. Each pedal stroke forcing more fuel to be burned. Anaerobic now, muscles are starting to destroy themselves, they can't keep it going. The brain ignores the pain - keep it going. Another hundred metres are gone. The road eases, the pain increases. The lungs are bursting.

Haylett's love of the sport is clear in the tales he tells. The darkness he wraps them in, however, does mean that The Cyclist's Tale and Other Short Cycling Stories is something of a challenging read.