The Man and His Bike, by Wilfried de Jong

Share All sharing options for: The Man and His Bike, by Wilfried de Jong 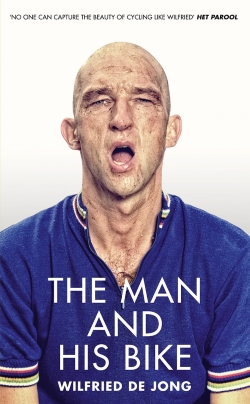 Title: The Man and His Bike
Author: Wilfried de Jong (with an introduction by Bert Wagendorp, translated by David Doherty)
Publisher: Ebury Press
Year: 2017
Pages: 250
Order: Penguin
What it is: A collection of short stories and essays from the respected Dutch journalist Wilfried de Jong
Strengths: The best contributions showcase a keen eye and a willingness to explore the dirty underbelly of reality
Weaknesses: The worst contributions showcase a sub-Hemingway macho sentimentality

If the title of this collection of twenty-three short stories and essays from Dutch journalist Wilfried de Jong - The Man and His Bike - suggests to you autobiography then you are reading it wrong. Need a clue on how to read it right? It's got an introduction by Bert Wagendorp, author of Ventoux, that rather trite cycling novel that sought to travel in the slipstream of Tim Krabbé and The Rider. Still not seeing it? Try and think of an easier way of saying the man and his bike: the rider? More Tim Krabbé wheelsucking? Well it is blurbed by him: "Sit down and let Wilfried guide you through the wondrous world of cycling."

De Jong is sort of a Dutch Jørgen Leth but with a background in theatre, not cinema. From there he moved into TV and radio and newspapers, with odd branches out into acting and music. The stories and essays here have previously appeared in De linkerbil van Bettini (Bettini's Left Buttock, 2005), De man en zijn fiets (The Man and His Bike, 2009), Kop in de wind (Head in the Wind, 2011), and Solo (2012). Though best known - and respected - for his journalism, for reasons unexplained this collection mostly focuses on his fiction, or those parts of his journalism where truth is somewhat elastic.

De Jong's 'wondrous' take on cycling here mostly mixes nostalgia and testosterone with large dollops of melancholia, topped off with sprinkles of angst. Now into the dying days when he can still claim to be fifty-something, death is a frequent feature in De Jong's tales of the unexpected: in 'Fausto No More', 'Bartali's Attic', and 'Addio, Marco' he offers saccharine-laced eulogies for Coppi, Bartali and Pantani ("Never again will we see that wiry body of his unleash a punishing breakaway. Never again those devastating changes of tempo designed to crush Armstrong. Never again that lightness of touch on the pedals. Or the sweat pouring from that shaved scalp and down past those jug ears. Pantani is no more."). In 'Click Clack' De Jong mourns his dead parents - and his long faded youth - through the medium of fading photographs, in 'Mist on Mont Ventoux' the ghost of Tom Simpson can be heard, in 'Pulse of 48' a MAMIL ponders his own mortality while out on a bike ride, 'Flat' sees him watching a funeral over the internet, in 'Montalto' a meeting in a graveyard leads to a story about a child killed years before, and in 'Bend' a near death experience is a prelude to an actual death.

Is this the future that awaits all fifty-something male cyclists, an obsession with death?

De Jong also likes to focus on the dirty underbelly of life: in 'Hôtel Neuf', 'Stickers', 'Wool', and 'Farmer on the Road' he strikes up conversations with people on the periphery of society. In 'Munkzwalm' it's a place on the periphery, not a person:

There are place names you don't forget in a hurry. Munkzwalm is surely one. Not a town, not a village, not even a hamlet. No, Munkzwalm. An asphalt-smoothered stretch of Flemish clay. One house to the left, one house to the right, a butcher's, a baker's and - let's not talk the place down - one more house for good measure. At a bend on the road, a statue of the Virgin Mary weeps rusty tears of utter desolation. Even the trees around insignificant Munkzwalm hang their heads in shame. The green leaves of spring know the score and hang back in the bud.

I park my car there on a Sunday in April, beside a building that stands alone and goes by the name of Café Taxi. Still over an hour to go before the Tour of Flanders1 passes this way. I step inside. It's around noon. The pub is heaving. The landlady, five feet two and clad in an apron that reaches the floor, is pulling half-pints like there's no tomorrow. On the sacred days of cycling, the Dutch tourists do their best to be Belgian, complete with local banter and cod Flemish accent. It's marginally less embarrassing than a bunch of Brits heading over to Ireland 'just for the craic, to be sure, to be sure.'

The pub might be called Taxi, but no one's going anywhere. Everyone's staying put. Waiting. Lingering.

De Jong can write with a photographer's eye and a comic's sense of the ridiculous:

Every head poking out of a raincoat collar is inclined to the left. As if Munkzwalm has fallen prey to an acute neck-cramp epidemic.

The problem is, he can also write like an ersatz Hemingway, clod-handedly mixing the macho and the sentimental, turning cycling into a solo experience that's all pain, pain, ever for ever. Here he is climbing - suffering! - up the Giant of Provence, in a short story that stretches your patience even before you're halfway through its twenty-two pages, even before you get to its rather predictable highpoint:

With the last of my breath I screamed. The sound carried further than I expected through the blanket of mist.

There was no reverberation, no echo. I clenched my fist and raised it at the marble slab. To spur him on. To spur myself on.

Fuck it, Tom. Take a slug from my bottle. Pop a pill if you have to. Let's face it, we've all been there. Come on, one last push together. I won't let you down. I'll shield you from the wind. Your wife is waiting at the top with sandwiches and a flask of hot tea. We're nearly there.

The monument was swallowed by the mist. I spat on the ground.

Altitude does strange things to a man.

I left Tommy behind and fought on alone. Solo. No more respite to be had from my gears. Another turn to the right. Pressure clamped around my legs. Twenty-nine teeth sank into the chain. Chew. Spit. Chew again. Straining. Panting.

Culled from four different collections and leaning as it does more heavily on the stories than the essays - whereas the Dutch collections from which they are drawn appear to generally favour the journalism over the fiction - The Man and His Bike lacks anything that could be called a unifying theme other than De Jong himself: a MAMIL struggling to get to grips with his fifties. The best, you're made to feel, is all behind him, as he scorns the present and yearns for the past.

For an example of this dose of nostalgitis infecting De Jong you only have to look at the bike brands he name-checks: Masciaghi, Bianchi, Gios. Proper bicycles. A steel frame, we're told, is a manly thing. Modern bikes? Treks are ugly, he informs us. Ridleys, he swears, are made from old heating pipes. Of course, there is one modern bike that escapes his scorn, the one modern bike that escapes the scorn of all MAMILS suffering a mid-life crisis. It's the bike that's the equivalent of the flash sports car for other menopausal men mourning their lost youth:

The man had a tangle of curly hair and a long goatee. A black bead dangled at the end like a stray punctuation mark.

I pointed at the light-grey letters on the seat tube. The owner crouched to take a closer look and read the name aloud.

'Pay-go-ready!' He might have been auditioning for Scorsese's latest gangster epic.

'Pegoretti,' I replied, in my juiciest Italian.

My fingers slid across the thin black lines that covered the frame and always reminded me of music staves.

'The bike's a tribute to Thelonious Monk. Pegoretti always paints his frames personally.'

He twisted the bead at the end of his goatee and continued to gaze at the frame in fascination.

Some of what De Jong is rightly celebrated for did slip past the editor responsible for this collection, it isn't all just one long mid-life crisis, MAMILalian misery. There's the 'Munkzwalm' story mentioned earlier, there's 'Merckx to a Millimetre', there's 'Nude with Wheel'. The second of those - 'Merckx to a Millimetre' - sees the Dutch Jørgen Leth doing a Jørgen Leth, rhapsodising the 1976 edition of Paris-Roubaix, proving that De Jong is best when he writes what he sees, here seeing Leth's A Sunday in Hell:

Just before the team sets out on the winding route to the start line, Eddy squeezes the brakes. The mechanic comes and stands beside him. The handlebars. What height are the handlebars?

Eddy himself holds the tape measure to the stem, 'Higher.'

The mechanic loosens the bolt with a hex key and starts to raise the bars. Eddy's eyes are glued to the lines of the tape measure.

'Encore plus?' the mechanic asks.

Agonisingly slowly, the handlebars edge upwards, one millimetre at a time.

And in 'Nude with Wheel' he talks us through the photoshoot that produced the cover image of De man en zijn fiets, the Dutch collection of his writings from which this book draws its title:

By now the nude photoshoot had gone way past the 15-minute mark. The cold was slicing straight through my skin and into my bones, or so it seemed. My buttocks began to tremble, as if the photographer was administering jolts of electricity to make them jiggle up and down. Shifting my weight from one foot to the other, I was able to make the trembling subside for a second or two.

My manhood was already seeking shelter from the icy wind. You can read a lot into the length of a cock. I've heard it called a thermostat for sensation and temperature. Looking down, I observed the conditions were far from favourable.

'Hold it there. Shift your weight onto your left hip. Get the wheel a little closer to your leg.'

In Florence, Michelangelo's David has been leaning on his right leg for over 500 years. His left knee is bent and his right hand dangles a little awkwardly next to his thigh, his massive fingers curled. How long did the model have to hold that pose before the sculptor was all chiselled out?

For the bits that work The Man and His Bike is worth the effort, just. But you do wish there was more of the stuff De Jong is celebrated for in the Netherlands and less of the schoolboy Hemingway.