Thoughts from the frontier of sports, science and technology.

Share All sharing options for: Game Changer, by Rayvon Fouché 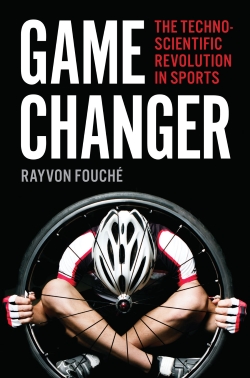 Title: Game Changer - The Technoscientific Revolution in Sports
Author: Rayvon Fouché
Publisher: Johns Hopkins University Press
Year: 2017
Pages: 272
Order: JHU Press
What it is: Thoughts on the impact of technology and science on sport
Strengths: Fouché serves up some interesting food for thought on the roles played by technology and science in sport
Weaknesses: Do academics ever stop and think about the poor reader?

According to the Great Boffo, "the man is more important than the machine." According to Rayvon Fouché, this is little more than a comforting lie, something that mollifies insecurities, inspires confidence, and supplies motivation even when chances for success grow ever slimmer. "The growing popularity of this phrase among cyclists, and others similar to it in other sports," Fouché tells us, "stems from anxieties about uncontrollable unknowns."

The man and the machine - the athlete and the uncontrollable unknowns - are the subjects of Fouché's Game Changer - The Technoscientific Revolution in Sports. In it Fouché attempts to highlight the influence on sport of technoscientific objects, practices, and procedures (the author - the Director of the American Studies Program at Purdue University - has a frustrating habit of tossing out three nouns where only one is needed, as if he were a PhD student desperately trying to reach the required word count and not realising how crippling his superfluities are to the reader). Through a series of case studies Fouché explores some of the ways in which technology and science "influence, shape, and challenge the ways in which societies play, experience, and consume the multiple manifestations of sporting competitions." (I'm not joking about the three-peats - even his sneezes probably come along three at a time.)

Those case studies cover Oscar Pistorious and physical augmentation, Caster Semenya and gender mutability, and Lance Armstrong and the failures and future of the anti-doping testing system. There's also the story of FINA's efforts to control swimwear along with a number of briefer anecdotes about basketballs, baseball bats and bicycles. Oh, and shoes: from the Miracle of Bern to Nike's Air Jordans, shoes have been at the forefront of the technoscientific revolution in sports. (Adidas would have the world believe it was their changeable studs that won the World Cup for West Germany in Bern in 1954 while three decades later Nike built a whole advertising campaign around a questionable claim that the shoes they made for Michael Jordan had been banned.)

Coming as it does at a time when cycling is consumed with debates over the twin evils of disc brakes and hidden engines (I exaggerate, a little, for dramatic effect), Game Changer offers the reader an opportunity to reconsider what role they think technoscience plays in cycling.

As cycling fans, we are not exactly ignorant when it comes to the roles of technology and science. Techs mechs and kit porn fill most cycling magazines. When Bradley Wiggins took on the Hour record in June 2015 we knew the impact of air pressure and temperature on the outcome, we knew that it wasn't just about pedalling fast for sixty minutes. From Sky's marginal gains to Movistar's dalliance with big data and Trek's use of apps, we are bombarded with puff pieces championing the use of science and technology in this sport. And yet, as cycling fans, when the racing action gets exciting, we're able to park these thoughts and believe - imagine - that what the Great Boffo said is true: the man is more important than the machine.

Except, that is, for one thing. As cycling fans, we are well used to the notion that, taking doping out of cycling, bike races should be slower than they once were1. So when we see riders still climbing at the sort of speeds that made Gen-EPO seem so ridiculous, what do we do? We turn to science to see if the weight-adjusted wattages support what we think we've just witnessed and, once they do, we wonder how science has made this possible: either those riders are still doping, or those riders have hidden motors. Other technoscientific factors - from road surfaces to aerodynamics - are dismissed, as is all the puffery over marginal gains, big data and apps. In this regard, some of the ideas explored by Fouché in Game Changer might just encourage us to open our minds a bit more to a wider set of possible influences on the achievements we are witnessing.

A former amateur on the American domestic scene in the 1980s and '90s, Fouché gives over quite a lot of space in Game Changer to cycling. When considering the impact of equipment, he looks at the Hour record, in the period between Eddy Merckx's 1972 ride in Mexico and Chris Boardman's final ride in 1996 after which the UCI pressed the reset button:

"Compared to wind-cheating disc wheels, tear-shaped bicycle frames, and aerodynamic helmets that increasingly came into use after Merckx's hour record, Merckx's bicycle looked 'normal.' His body was considered special, unique, and decidedly abnormal, in that he did not need any more than breakfast to put the hour record out of reach. But this mythology, like most technoscientific and sporting mythologies, serves a social and cultural purpose. The mythological Merckx, as the perfect synergy of common bicycle and uncommon body, maintains the illusion that an athletic body will always be vastly more important than any device in the final outcome of a sporting event."

This belief in an athletic body is something we can sometimes struggle with as cyclists, mocking as we do our farmer tans and disconcerting mix of overly-athletic lower bodies and bird-chested uppers. There is only a minor tradition of celebrating the cyclist's body, a tradition that includes the recent photograph of Chris Froome published in The Times, along with the likes of Mario Cipollini (multiple times), Victoria Pendleton, Rebecca Romero, Lance Armstrong, and Marty Nothstein. Regardless, we still imagine that we know an athletic body when we see one. A belief that is cast into doubt in one area by Oscar Pistorious and in another by Caster Semenya, both of whom "challenge an already-presumed notion of what a sporting body is and should be."

While most of us have at least some form of a blind spot to many of the roles played by technology and science few of us are blind to the role of technoscience when it comes to doping. And this is an area Fouché gives over rather a lot of space in Game Changer to, in one chapter taking two dozen pages to rehash the story of Lance Armstrong's downfall, as an explanation of how direct testing is not working and why it needs to be got rid of, and in a second chapter spending another two dozen pages on the subject of the biological passport. Here Fouché repeats myths such as that from  "1987 to 1989, nearly twenty deaths of young cyclists have been attributed to the experimental use of EPO." At this stage, I think, we're all familiar with the problematic nature of this claim, highlighted by Bernat López and popularised recently by Mark Johnson. The myth of bodies piling up on mortuary slabs was, for a time, a necessary lie we told ourselves and the world. But why are we still repeating it? Worse, why are we still exaggerating it - the 1991 article Fouché cites as his source for this statistic suggests that EPO "may be implicated in the deaths of as many as 18 European professional bicycle racers in the last four years" so why did Fouché round that up to "nearly twenty" while halving the time frame? Dramatic effect?

Fouché's overall argument about anti-doping is firmly rooted in American notions of what anti-doping is about, so much so that the only dopers he seems able to reference are Americans:

"The emotional, financial, and cultural tolls on athletes, fans, governing bodies, and sport in general before, during, and after the pursuit of highly esteemed athletes such as Lance Armstrong, Marion Jones, and Barry Bonds demand that we reconsider seriously what functions the institutionalization of anti-doping testing regimes serve, as well as the ways in which our trust in the technoscientific efficacy of direct testing supports and gives power to these bureaucratic systems. Most simply, testing functions as a technoscientific instrument to provide a way of ensuring that athletic competitions are fair and that each competitor has an equal chance of winning. Thus testing, at its core, is designed to make sure that no athlete has taken a substance or altered his or her body in a way that provides a significant advantage over his or her competitors. Unfortunately, this simple function lacks robust explanatory power."

The functions Fouché thinks anti-doping serve are, to my mind, wide of the mark, chosen more for the ease with which they can be shot down than as fair representations of reality. That anti-doping fails to catch everyone is not news, it hasn't been news at any point during the five decades we have been living with anti-doping. But then, the last time I checked, neither is it news that speed-cameras have proven to be an abject failure when it comes to eradicating speeding, or that breathalyser tests have been an abject failure when it comes to eradicating drink-driving. Do we argue - as Fouché does here when it comes to direct testing - that speed cameras and breathalysers should be replaced with something different? Of course we don't.

Funnily, the thing Fouché argues can replace direct testing is longitudinal testing: the biological passport. Which, you may be aware, failed to catch Lance Armstrong and, you may also be aware, played a role in catching Thomas Dekker - the Dutch star's ABP profile didn't trigger any alarms but did ring enough bells that Anne Gripper's doping police revisited some of this old samples and so were able to exile him to the naughty step using direct testing. The ABP, we all know at this stage, is being used to guide direct testing, not - as Fouché argues - replace it.

While I found myself in disagreement with Fouché when it came to his specious representation of the doping debate and while I found myself often frustrated by his obtuse, repetitive, overly academic writing style, Game Changer still made for an interesting read which succeeded in its attempt to challenge the way we think of sport, which succeeds in challenging our belief in the Great Boffo's argument that the man is more important than the machine:

"Collectively, these examples challenge sporting cultures to rethink the primacy of the body in the narrative of athletic performance and to reconceptualize athletic performance as an evolving network of bodies and material artifacts that is as much a human endeavor as it is a technoscientific enterprise. In a sense, we must abandon the motor-over-machine argument and move toward understanding the symbiotic relationships between the motor and the machine, the body and the artifact."