Share All sharing options for: Tom Simpson, by Andy McGrath 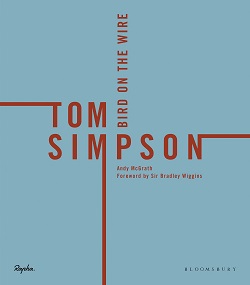 Title: Tom Simpson - Bird on the Wire
Author: Andy McGrath (with a foreword by Bradley Wiggins)
Publisher: Rapha Editions | Bloomsbury Sport (in arrangement with Bluetrain Publishing)
Year: 2017
Pages: 224
Order: Rapha | Bloomsbury
What it is: An illustrated biography of Tom Simpson, winner of Milan-Sanremo, the Ronde van Vlaanderen, Bordeaux-Paris, Il Lombardia, and the World Championships and the first Briton to wear the Tour de France's maillot jaune
Strengths: Some rarely seen images, with the colour ones being especially eye-catching
Weaknesses: It's content to be little more than the life of Tom Simpson, patron saint of British cycling

In July 2016, Thomas De Gendt, a twenty-nine-year-old professional with Marc Sergeant's Lotto-Soudal squad, won his second Grand Tour stage, climbing to victory on the slopes of Mont Ventoux. Four years before, he'd claimed his first, on the penultimate stage of the ninety-fifth Giro d'Italia, attacking as the race hit the final climb of the day and soloing his way to a well received victory atop the Stelvio. The second win came in the hundred and third edition of the Tour de France and you have to search very hard in the race reports to find the Belgian rider's name, his victory overshadowed by events. First, there was the truncating of the stage: the planned finish atop the Ventoux was moved down the mountain to Chalet Reynard as hundred-kilometre-an-hour winds blew across the summit. And then there was the farce further down the mountain: Richie Porte rode into a camera motor-bike and took down Chris Froome, who then took to his feet and tried to run up the mountain, leaving his broken bicycle behind him.

So De Gendt, he knows about being upstaged, he knows how the fans and the media can see one part of the picture and blank from their minds the rest. He knows how sporting success can get shunted aside as fans and media focus on the more sensational aspects of the sport. Maybe that helps him get what has happened with Tom Simpson. "I knew about Simpson, that he was world champion and the rest," De Gendt tells Rouleur's managing editor Andy McGrath in the latest contribution to the wealth of books telling the story of the first Briton to wear the Tour's maillot jaune. De Gendt goes on: "but maybe younger riders from my age only get to see the images the media shows the most, and that's the Mont Ventoux tragedy. Maybe it's fair to say they forget some of his victories."

Forgetting some of Tom Simpson's victories is something people are very good at. In Jeremy Whittle's Ventoux, Simpson's youngest daughter, Joanne, tells The Times's cycling correspondent how she is often surprised by fans at the memorial to her father near the Ventoux's summit and how little they know about how much he achieved, how they only remember him for losing his life during the Tour de France. With Simpson's death having been done to death in plenty of other books and articles, Andy McGrath's Tom Simpson - Bird on the Wire offers the perfect opportunity to right past wrongs and show new cycling fans that there is so much more to the man who is, arguably, even today still Britain's most successful cyclist in the sport's most prestigious one-day races.

Simpson after being crowned the new world champion in 1965

Simpson's most famous victory came in 1965 when he won the World Championships, a victory that forms the backdrop for the Frank Dickens novel A Curl Up and Die Day. Unlike many of his rivals that day in San Sebastian, injury and illness had caused Simpson to miss much of the post-Tour critérium circuit, those torturous few weeks after the Tour where riders tore around cycling's heartlands, an itinerant band of performers each night putting on a circus show in a new town, sleeping in their cars, eating on the road, and destroying their form.

Back then, the World Championships was cycling's Glastonbury: you slept in a field. In 1961 the tents were raised on the shore of Lake Zürich, and Simpson had the help of his wife, Helen, in preparing for the racing.

Another advantage the British star enjoyed was that the GB squad was united behind its leader - Simpson having bought their loyalty - while other nations were riven by the usual internecine squabbles one finds in Worlds' tales. "The small, but perfectly-formed Great Britain team," McGrath tells us, "was in a position to capitalise on the disarray of several bigger, stronger traditional cycling powers." As for their leader, McGrath tells us that, while he "may have had the build of a bird" he possessed "the heart of a lion." Simpson escaped with Germany's Rudi Altig three laps from home and, in the closing metres of the race, his team-mates having helped put the brakes on any pursuit, seized the advantage when his rival fluffed a gear change: "I don't understand how a great champion of Rudi's class chose to use his derailleur during the sprint," McGrath reports Simpson saying afterwords.

The new world champion turns kudos into cash on the critérium circuit, here signing autographs at the GP Amitié Puteaux a month after donning the rainbow jersey. Ireland's Shay Elliott claimed the victory in the race.

Six weeks after winning the Worlds, Simpson pulled off a double that had only happened once before, following in the wheel tracks of Alfredo Binda and winning Il Lombardia with an emphatic victory over Gianni Motta: "Taking the race by the scruff of the neck for 200 kilometres epitomised his exciting philosophy of cycling," writes McGrath. "When it came to enterprising tactics and outlasting everyone else, there were few better than Simpson." Il Lombardia was Simpson's third victory over the course of five years in cycling's Monuments. In 1964 he added Milan-Sanremo to his palmarès and in 1961 he took victory in the Ronde van Vlaanderen.

The story of those three victories in the five Monuments - along with Simpson's 1963 victory in the Derby of the Road, Bordeaux-Paris, once considered by some to be one of cycling's Monuments - is, sadly, not the beating heart of Tom Simpson. That is as it has always been with Simpson: the Tour de France. Before getting to the Tour, though, McGrath tries to capture the essence of Simpson, telling us how he was "a joker who wore a permanent smile" and how "you could expect the unexpected with Simpson." He was a man "who marched to his own beat" and sometimes rode "like a Catherine wheel, flying up the road before the mountains, shining brightly then flickering and dying as the race wore on." He was, McGrath says, "a loose canon." But one that learned: "going through more and more raging baptisms of fire, Simpson proved able to stand the heat." Those apprentice years were not easy. For several, "Simpson was racing in the gutter looking up at the stars" and lived "a hand-to-mouth existence." But success came, starting with Flanders in 1961, and with it came not just a change to the circumstance chez Simpson: "Over the next six years he banished British cycling's inferiority complex and established himself and the country as a force in the sport with his brilliance in its most prestigious one-day races".

Cashing in on the Six Day scene - note the array of potions and lotions on the shelf.

"In his career," McGrath tells us of Simpson, "there was often a bit of rough with the smooth." And a lot of that rough came in the Tour de France. Simpson rarely did well in stage races: at the start of his career he won the Tour du Sud-Est and at the end he won Paris-Nice. But the Tour couldn't easily be avoided: "a stage win, spell in the yellow jersey or top-ten finish were all guarantees of a summer of lucrative criterium appearances and a potential pay rise." Simpson never scored a stage win (he did take two at the Vuelta a España) but he did get a top ten (sixth in 1962) and did get a spell in the yellow jersey (the Superbagnères stage in 1962).

Racing in the yellow jersey – Tom Simpson during the 1962 Tour de France, time trialling to Superbagnères.

In the time since the twenty-nine-year-old Simpson's death on the Ventoux five decades ago the British have struggled to get to grips with how they should remember their former World Champion and winner of three of the Monuments. For a long time Simpson was cast into purgatory and became the focal point for British cycling's inferiority complex, blamed for holding the sport back, blamed for its insular attitude. But by the time Mark Cavendish won his rainbow jersey in 2011 Simpson's sins, being of the venial variety, had been forgiven in official quarters: a relic from the one true cross, his rainbow jersey, was used by Rod Ellingworth - a man so pure he would rip a page from the bible least his eyes feast on an image of Richard Virenque - to spur his charges on to success. Simpson has become the patron saint of British cycling, with his own altar on the slopes of the mountain he himself was - in the minds of some - scapegoated on.

These are, however, still confusing times for British cycling fans, as the confused attempts here and elsewhere to justify Simpson's doping show. Why they are so confused I don't understand: it's not as if there is much guilt involved in celebrating the careers of Fausto Coppi, of Charly Gaul, of Jacques Anquetil, of Eddy Merckx. Maybe Pat McQuaid was right and there really is something in the Anglo-Saxon attitude to these things. Some puritanical streak that renders them blind to the realities of cycling's long association with the pill and the potion, renders them incapable of seeing the collective errors made in the attempts to change the sport's culture, only able to see the sins of the individual. One day I'd like to think they'll get to grips with it all and treat Simpson like the other stars of his time. Until then, enjoy the pictures.

Simpson at the 1965 Tour de France, after crashing on the descent from the Col d'Aubisque